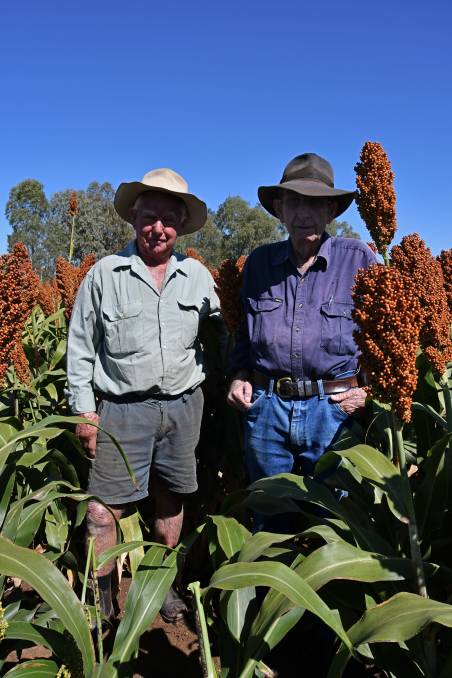 THE last time Mike Bowler had a crop so good in his Bowlers Lane paddock on the outskirts of Tamworth, it went three tonnes to the acre.

The year was 1996 and the crop was wheat, however on Tuesday the legend of the Tamworth region's farming community came close to replicating that achievement by taking out the Duri Agricultural Bureau's annual sorghum competition.

Mr Bowler claimed first prize for his crop of Centennial variety sorghum, which was planted on November 5.

"My good friend and the brains behind this crop Dave Brummell told me back in 96' that I wouldn't strip as good a crop in this paddock again and it pains me to say that he was right," Mr Bowler told The Land.

"It might not be wheat, but as far as sorghum goes this is one of the better crops I've produced and is probably as good a crop as I've produced in this paddock since that 96' wheat crop."

The property, on the western outskirts of Tamworth, was the first of six judged by Pursehouse Rural agronomist Greg Worland, who said all six crops in the Winton, Bective, Bithramere and Duri areas were outstanding.

"I'd say this is the best offering of sorghum crops I've seen in this district for at least five or six years," Mr Worland told The Land.

"In fact, I think it could well be one of the best ever seasons of sorghum for this district.

"All of the crops we have seen today [Tuesday] have been outstanding and all of the producers deserve a lot of credit."

The competition for first place was fierce as Rich Walters of Glen Allen, Winton finished in second place for his crop of Buster variety sorghum, while nearby producer Gareth Rogers took out third place with another Buster crop.

"They were six really good crops and while they had suffered some mice damage, it wasn't nearly as bad as some other areas," Mr Worland said.

"I know there has been a lot of aerial and ground baiting done around this district and it has certainly helped."

Mr Worland said the competing producers would now be looking for rain ahead of a dry March.

"I think another inch or two of rain in the next week or so would be fantastic," he said.

"Most producers will be looking for that in my opinion before hoping for a dry March to ensure the crops are ready for harvest."