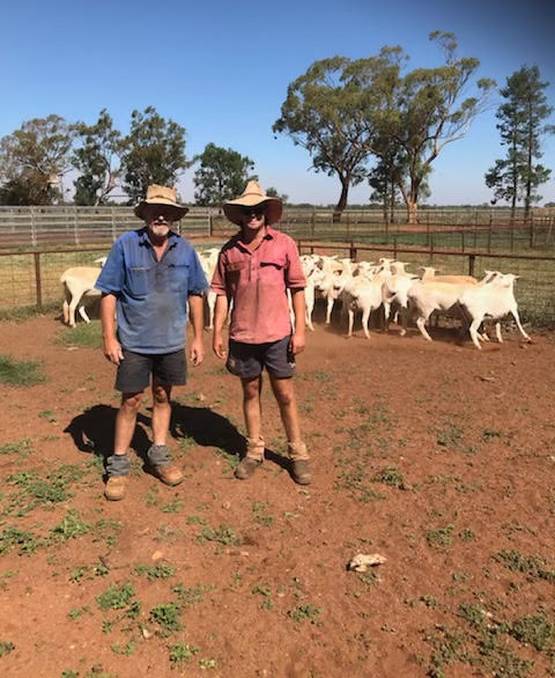 Doug and Lachlan Manwaring, Condobolin with some of their Aussie White ewes that they sold for a top of $601 on AuctionsPlus last week. Photo: Tim Mackay

The eye-watering demand for Australian White sheep is continuing to rise with ewes selling for a top of $601 on AuctionsPlus last week.

Doug and Debbie Manwaring with son Lachlan and in partenership with DG & NJ Manwaring, sold 400 Tattykeel-blood Aussie White ewes at the online platform's weekly Tuesday sale, their sheep attracting from $513, for ewe hoggets, to $601, for three to four-year-olds ewes scanned in lamb.

Five lots of ewe lambs, April/May drop, weighing an average 61.50 kilograms and station mated, made from $549 to $553 and were bought by South Australian buyers, Caitlin Harvey and Jason Squire.

The $601 price tag for the SIL ewes was paid by Nutrien Bathurst.

Doug Manwaring said it was very rewarding to attract that sort of money.

"We've put a lot of time and work into those ewes," Mr Manwaring said referencing feeding the $601, older, ewes through the drought. 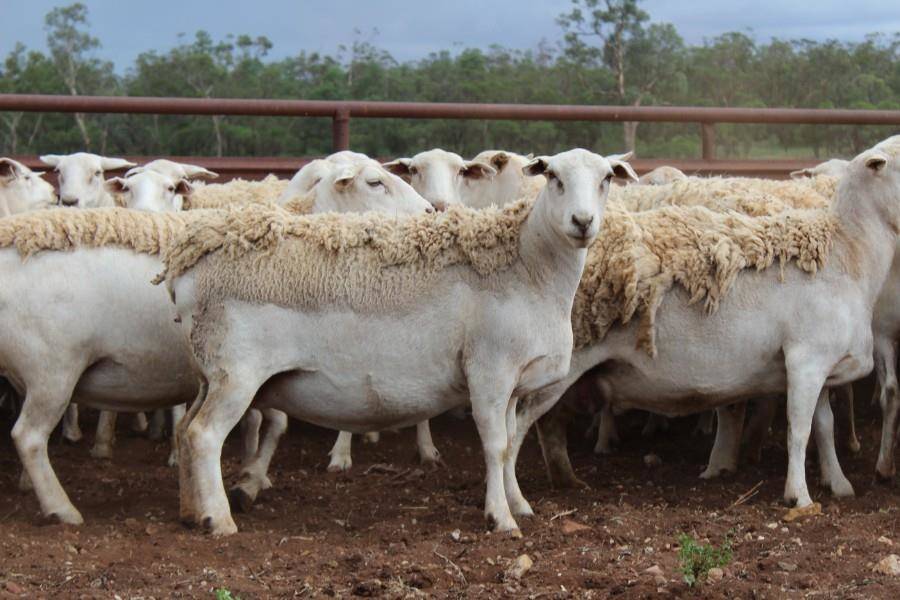 The $601 ewes were three to four-years-old and scanned in lamb. Photo: AuctionsPlus

The Manwarings run around 4000 Aussie Whites in total, having started buying in Tattykeel rams back in 2014.

Prior to that the mixed-farmers ran Merinos.

"We thought the Aussie White was a better fit for us, we wanted to get away from the shearing, they're easy-care, self replacing and are a bit bigger than the dorper," Mr Manwarring said.

The Manwaring's agent Tim Mackay, Forbes Livestock and Agency Co said the sale was one the biggest thrills of his 37 year career as an agent.

"It was one of the most unexpected high prices I've seen," Mr Mackay said.

Mr Mackay said he was seeing a rise in the demand for shedding sheep.

"There's two things driving that, obviously they're good hardy sheep and the Western region are all trying to restock after the drought," he said.

"And people are also starting to look at them due to the lack of shearers around."

Interest also comes from buyers just starting out with sheep and who are chasing low-maintenance, fast-growing animals.

Caitlin Harvey, who bought the Manwaring's ewe lambs alongside her partner Jason, said they had recently bought a property at Second Valley, SA and wanted a good flock of sheep to graze it.

"We thought Aussie Whites would suit the climate the best and we really wanted to get in early before the prices went even higher," Ms Harvey said.

It's the second time the high price of $601 has been reached for Aussie White ewes on AuctionsPlus this year.