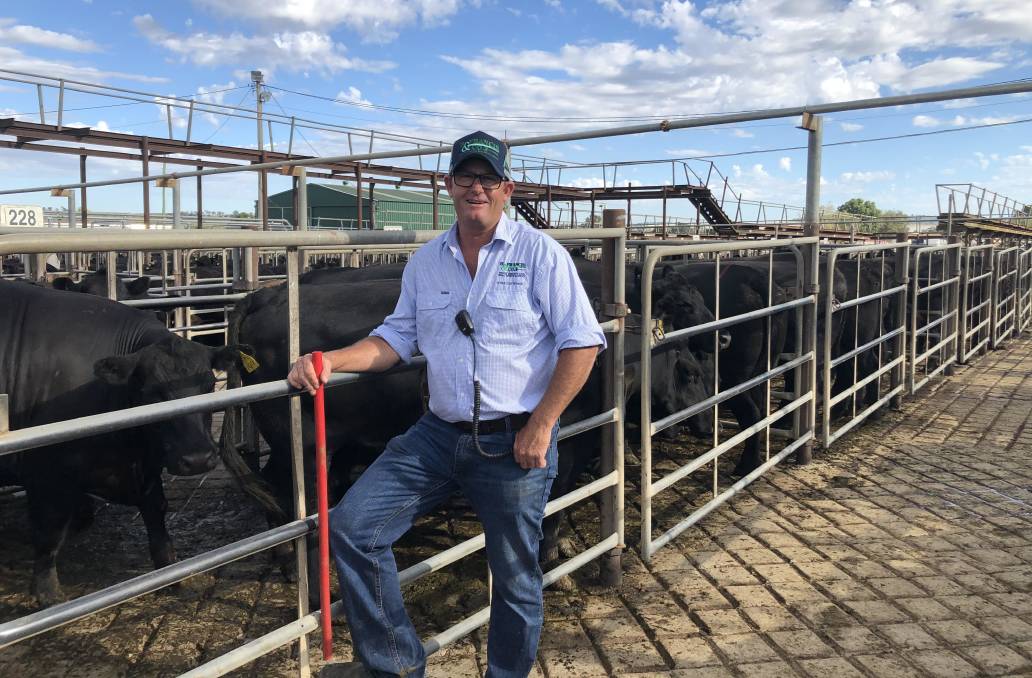 H Francis and Company agent Scott Myers with some Angus cows ready for sale at Wagga Wagga on Monday. Cows sold for up to 320c/kg at Wagga. Photo: Helen de Costa

The heavier the cattle the bigger the price at Wagga Wagga.

The young cattle market continues to fire however, the export market is lagging behind in some parts of the state.

Christie and Hood agent Paul Alchin, Dubbo, said the heavy cow market at Dubbo had held firm during the past three weeks, with the best cows making 300 cents a kilograms to 310c/kg.

"That is an improvement on earlier in the year when it opened up a bit flat," Mr Alchin said.

Mr Alchin said there were very few cows coming through the saleyards, but those offered were well-finished, heavier weight articles.

"Anything that's worthy of going around again another year is being held back."

Meanwhile, the grown steer and heifer market was 8c/kg cheaper at Dubbo last week: steers selling for a top of 378c/kg and heifers got to 384c/kg.

"Prices for heavy cattle are pretty much a sale by sale basis, but there's no great activity by export processors in that heavy steer job," Mr Alchin said.

"Compared to the rest of the market it's lagging behind a fair bit."

However, Wagga Wagga may be an outlier when it comes to the cow and heavy steer job, with the large numbers penned attracting strong competition from processors and some feedlots - the feeder job pushing into heavier weight ranges.

There was 752 cows yarded at Wagga on Monday and Rodwells agent Anthony Cummins said his best cows, Charolais, sold for 320c/kg.

"The heavier the cows, the more they're making, it's crazy, because normally when you go up to 700kg you start getting penalties but it appears the heavier they are the better they are," he said.

"We've seen those prices for 500kg steers but for 580kg steers that was quite an increase I thought."

Mr Cummins said he thought the increased competition for very heavy steers was due to the feedlots taking heavier cattle.

"I presume they're just doing a short term feed job."

In the north of the state, at Gunnedah, Davidson Cameron and Co agent Tom Tanner said there was another local processor in the market this week, leading to cows jumping 10c/kg to 12c/kg.

Meat and Livestock Australia reported that heavy grown feeder steers sold to a cheaper trend by as much as 10c/kg, while heavy steers to the processors were dearer with a premium for younger age groups.