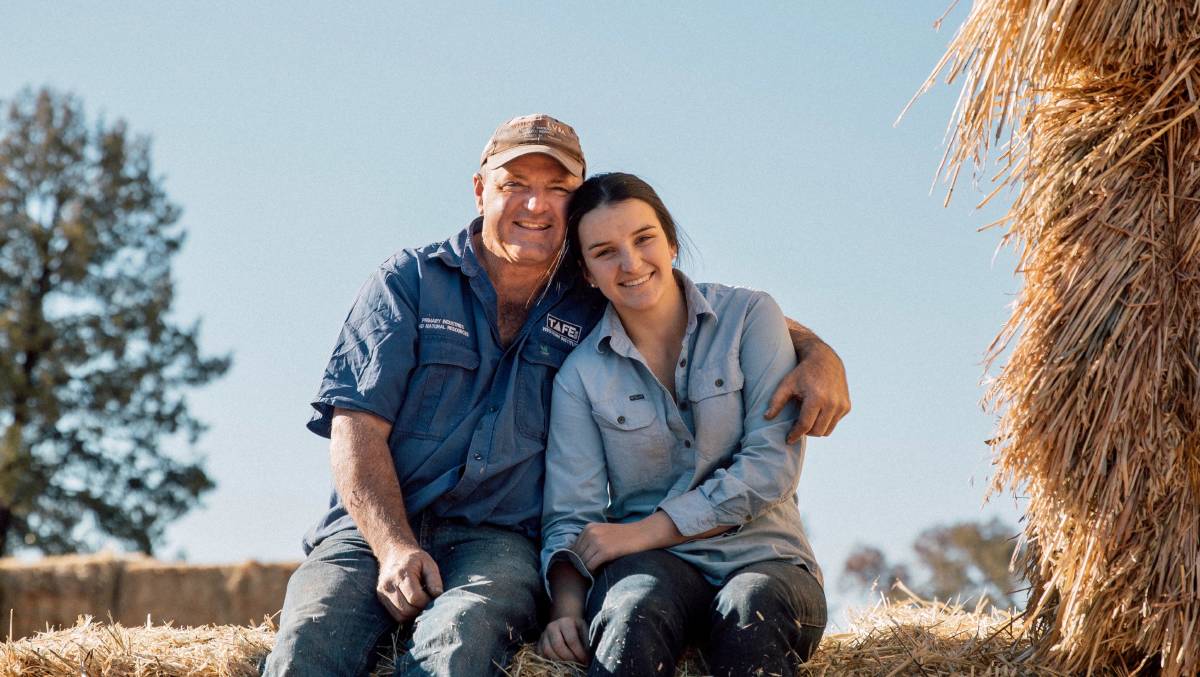 Drought forced many farmers to think outside the square. One family has done just that by transferring farm skills into an innovative idea.

Just as every farmer has a pair of farm jeans and 'good going out' jeans, a unique business venture has the same trend for cutlery.

The father and daughter duo of Brad and Tasha Hurley are showing Aussie ingenuity at its best by transforming old spoons into beautiful rings at their property Kalabra, 100 kilometres north west of Condobolin.

What started as a hobby and distraction from the drought in 2017 has turned into the business Good Going Out Cutlery that "allows them to tinker in a the shed and create beautiful pieces with a story".

They didn't start feeding their 320 Hereford breeders and 800 white dorper sheep until 2018.

But when they did, they fed every day for two years until the season turned in February 2020.

That's when the drought broke with 127mm of rain that filled the dams.

"It started to rain and hasn't stopped since," Brad said.

Last year they recorded 635mm of rainfall for the year, well above their yearly average of around 431mm. What started as a hobby and distraction from the drought in 2017 has turned into a business. Photo: Good Going Out Cutlery

During the worst of the drought, Brad came across a bloke in Tasmania that was bending spoons into jewellery and he thought: "I could do that".

"It was a bit of relief in the drought," Brad said.

Every time they would travel, the pair started buying spoons at any second-hand shops they could find.

Brad then started bending them into rings, which they first sold to friends and family.

"But it's gone bigger than I imagined," a humble Brad said.

That's when Tasha stepped into the conversation and talked about how proud she was of her creative dad.

"Dad always has projects, he is very creative," Tasha said.

"He has made barbed wire sculptures and lamps. He is always finding something new to do and that's when the idea of the rings came about.

"We didn't think we would be making rings for that long, people love them and now here we are."

The business has grown so big that they now have an online presence where they showcase the rings.

Brad said people could also send their own spoons that can be "whipped" into something they can wear.

They had one customer who had bought spoons while travelling overseas when she was 20-years-old.

"The spoons had been in her draw ever since and she brought them to me nearly 60 years later to be turned into rings for her grandchildren," Brad said.

Brad said he just loved making craft, which was what inspired him.

"There are only so many ways you can bend a spoon but I always come up with different designs," he said.

"I looked at the barbed wire balls that you see in people's paddocks and finally worked out how to do it. You adapt as you go."

He also ended up revamping lamps, which he would create a barbed wire shade from recycled wire he kept from fencing he had "done a while back".

"I ran out of barbed wire but I kept nicking my skin so I moved onto spoons, which are so much easier and less nicks," Brad joked.

While Tasha has been able to grow the business working on farm during the coronavirus, she is now heading back to complete her final year for her agriculture business degree at Charles Sturt University in Wagga Wagga.

She joked her dad might have to take over the website. Brad was quick to reply: 'she can do it from there'.

"My relationship with dad is that we are best friends, mum gets annoyed with us whenever I'm home as we are just like two kids," she said.

"So I guess I will be doing the website as that's not dad's forte and he can stay in the shed to make the rings."

When asked how they came up with the business name, Tasha said she was inspired by her brother Bill and an inside joke one Christmas when everything he wore he referred to as his "good going out" clothes.

"I'm sure most farmers can relate to that," Tasha said.