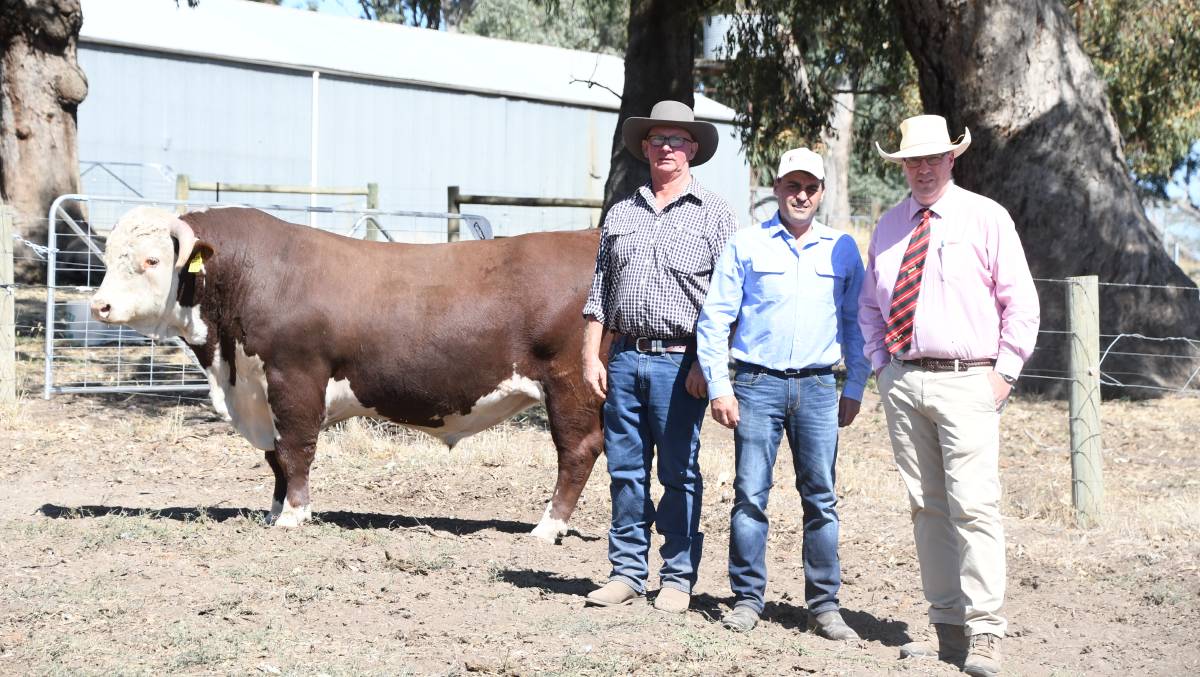 Glendan Park's annual on-property sale was a record-breaker for the stud's 32-year history of breeding Herefords.

GLENDAN Park's annual on-property sale was a record-breaker for the stud's 32-year history of breeding Herefords.

Glendan Park Quarterback - Lot 21 - was the highly sought after bull on offer, being inspected and viewed by studs across Victoria and NSW in the lead up to the sale.

Lot 21 was a 22-month-old son of Yavenvale Giteau, who was in the top 1 per cent for milk and intramuscular fat (IMF).

He was secured for $76,000 by a syndicate of Lotus Herefords, Glen Innes, NSW, and Supple Herefords, Guyra, NSW.

"He has a lot of animals in his pedigree that we've been watching, and trying to put into our program here, and he runs back to the Fern family of cows from Widgiewa, that are a beautiful family of cows," Ben Rumbel, Supple Herefords, said.

"He had such a good eye muscle to weight ratio, while he is in the top 1pc for IMF, but it's more he actually did it with his scan data.

"I found the bull through researching his pedigree, as he had lines that I was looking for, and lines that we had been keeping an eye on.

Ben Rumbel, Supple Herefords, said it was his overall power and carcase that drew him to the bull.

"His muscle pattern, weight for age and phenotype [were stand-outs]," Mr Rumbel said.

Tony Hollis, Lotus Herefords, said he was a bull to suit his cows and clients thanks to his natural attributes and phenotype.

"We did 5200 kilometres in a week, looked at a lot of cattle, and had four bulls in mind so far, and he was one of them," Mr Hollis said.

"I think this bull has a lot to offer the breed."

"Lot 19 still ticked our boxes, both on phenotype and carcase attributes, and was a big, long, upstanding bull, that was very correct when he was walking.

"We've been supporting the Glendan Park stud for about 15 years, and probably bought 40-odd bulls in that time."

Stud co-principal Alicia Trovatello was over the moon for the support received for her and her father Alvio Trovatello's bulls put forward on the day.

"Given the restrictions with COVID-19, having AuctionsPlus in attendance made our sale result stronger overall.

"We definitely had more phone inquiries about the bulls this year and I provided more photos and videos to people than usual.

"We also had more arranged inspections prior to the sale."