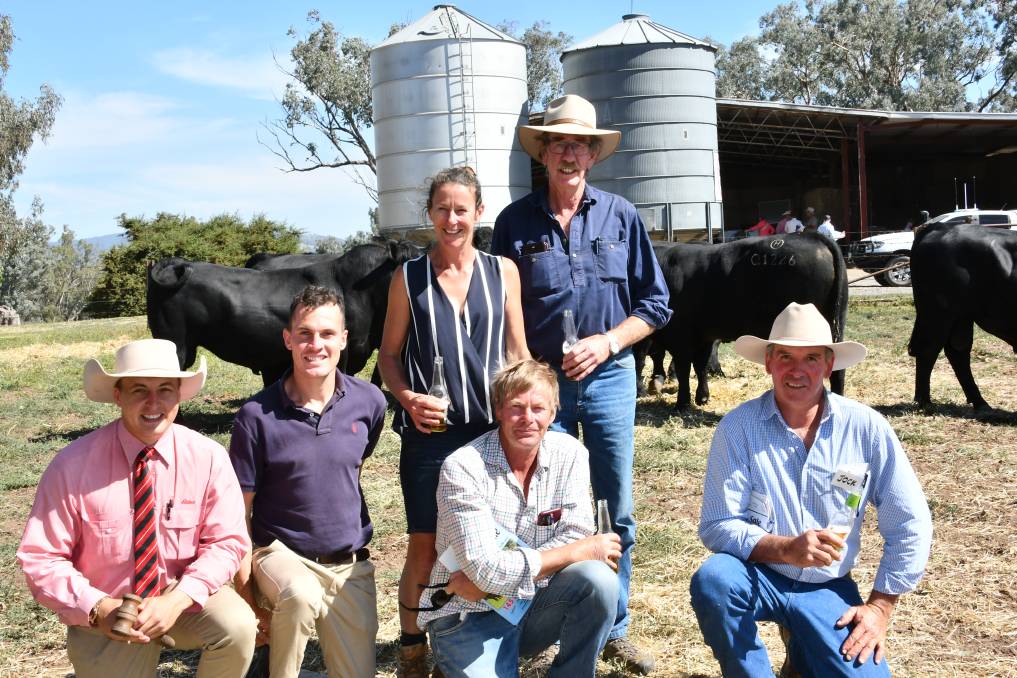 Dunoon Angus set the pace from the first bull.

The scene was set from the first bull of the day at Monday's Dunoon Angus bull sale, Holbrook, as the first bid kicked at $36,000 and went on to top at $45,000 as buyers scrambled to get the upper hand early.

You couldn't pick the difference between stud breeders and commercial buyers as bids flew thick and fast, with the first 50 bulls averaging $16,180, before the first 100 followed suit at a solid $14,500 average, before one would have thought it would tail off at the end, but no it wasn't to be, averaging $13,839 across the draft.

The top bull was Dunoon Q829, a son of the highly rated Rennylea L519 out of the Dunoon Dandaloo line of cows, with a low birth weight at +3.7, strong growth to +123, positive milk, rib and rump figures, coupled with an eye muscle area of +11.3 and an intramuscular fat percentage of +4.3.

He was snapped up by Steve and Amity Chase at Waitara Angus, Trangie, in partnership with Genetics Australia for $45,000, who just pipped Trio Angus as the underbidders.

Mr Chase said he was a very sound bull, with a good balance of numbers and phenotype, good through the feet and shoulders and had adequate muscling and genetics they could use with confidence.

"I love to see a yearling bull that has just been used, added to a catalogue and offered up for sale, it shows me he is ready to work," he said.

Steve and Leanne Collins, Brooksby Angus, Bundarra, paid $22,000 and $11,000 for two new sires, while Hicks Beef and Paringa Livestock teamed up to buy the only red gene carrier in the sale, by Rennylea L519 for the second top price of $24,000.

It was the commercial cattleman's day though, with Chris and Helen Nixon, Black Mountain, Orbost, Victoria, leading the way, outlaying $190,000 on new sires to take home 15 at $12,667 to join to their 700 strong breeding herd.

Mr Nixon looks for easy calving bulls that have good fat cover to counteract the extreme cold weather they get in the high country.

"We run a farm at Orbost and another at Wulgulmerang, where we produce weaners at Orbost for the mountain calf sales and grown heavy domestic steers on the coast to go direct to Greenhams," he said.

Sam Davies, Greenwald pastoral Company, Foster, Vic, bought his 300th bull for his family from the Harbisons, with a relationship spanning more than 20 years, as he secured 14 heifer bulls averaging $13,571.

Mr Davies family runs 9000 acres and 2400 cows across three properties at Foster, Dartmore and Nambrok, producing weaners direct to JBS and sold through Leongatha saleyards, with a focus on 400 day weights.

The sale was conducted by Elders with Lincoln McKinlay as auctioneer.