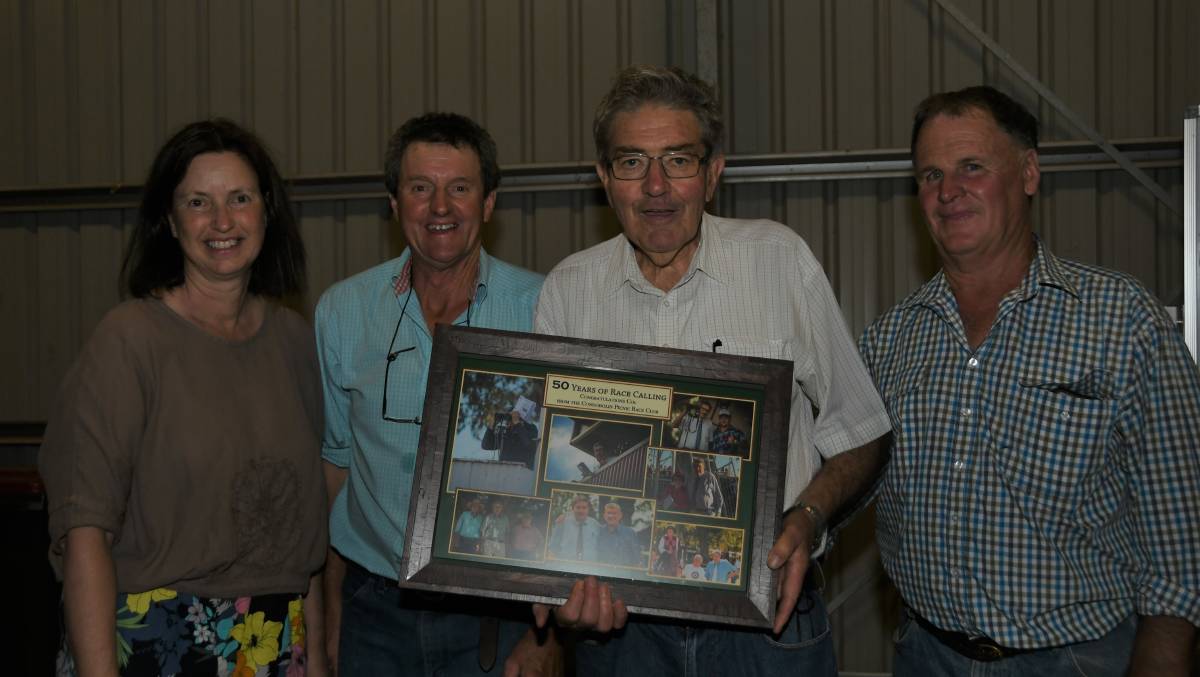 A mammoth event and mammoth career. Col Hodges accepts a photo montage of his great calling of 50 years of Condobolin races. Flanked by picnic club's Joy and James Gibson and Mark Ward. Photos by Virginia Harvey.

Condobolin puts on a show to kick off picnic races

FOLLOWING a visit to Forbes, Her Excellency the Honourable Margaret Beazley AC QC, Governor of NSW, made an unofficial stop for a peek at the Condobolin picnic races last Saturday.

Under steamy conditions Her Excellency was happy to walk among the 743 odd crowd and to have some "selfies" with patrons who were enjoying one of the district's most important community annual events at its picturesque and well-managed location.

But it was the races that took centre-stage with gelding Nevada Sunrise taking the major event the Inland Petroleum Condobolin Picnic Cup, for Dubbo trainer and part-owner Peter Reynolds, and Wellington based rider Michael Johnston.

This was a last chance for the four-year-old by Fighting Sun. 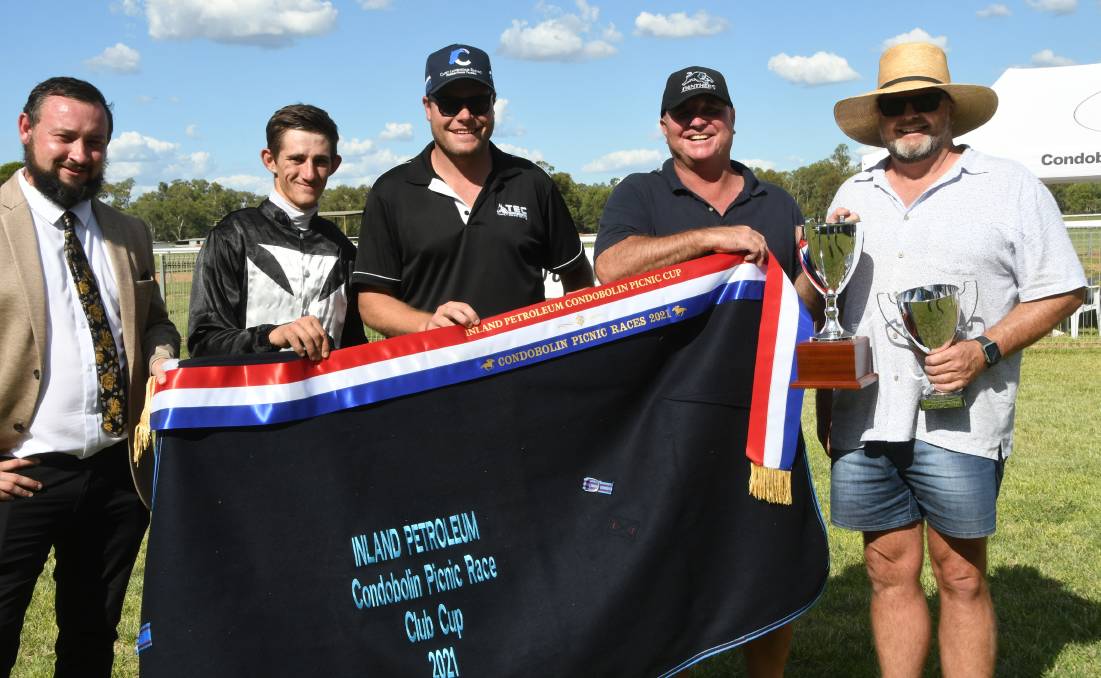 "If he didn't do anything this time, we were going to sack him," said Dubbo part-owner Graham Shaw.

Both were ridden by former top country hoop Wayne Wheatley, who along with mate "Leo" Leandro Ribeiro, double as track-work riders at Warwick Farm for leading conditioners David Pfieffer and Gary Portelli, respectively.

Former Australian Rugby League representative winger, Terry Fahey - who now prepares a team at Narromine, went home a winner following the win by Raise A Drop in the Class Two Trophy, and who was ridden by 18 year-old Zara Lewis.

It was the second winner for Lewis who is based with Bryan Dixon at Gilgandra. He had to settle for two placings including second in the Cup with Song One (Not A Single Doubt) for the afternoon.

"At least I don't wake up with bruises all over me now," said Fahey after his win. 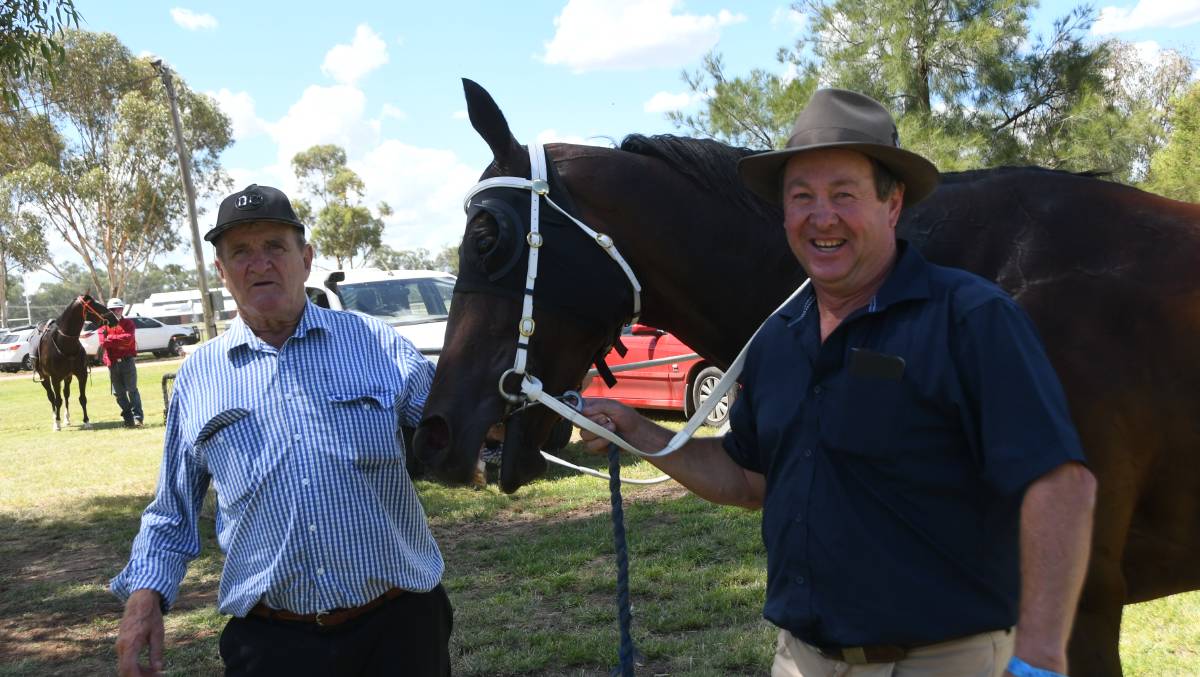 Nyngan conditioner Garry Bignell with his second winner Another Plan with strapper Craig Tyack from Tullibigeal at the Condobolin Picnics last Saturday.

Ninety-year-old local and life member of the Condobolin Picnic Race Club, Shirley Donnelly, was "dancing" around the grounds following the win of the Michael Plummer, Narromine, prepared Cherry Pie in the Class One 1100 metres race. A happy Shirley had selected and "bought" the Sebring five-year-old mare in the festive Calcutta event held at the racecourse the previous evening.

While committed to race-calling at Orange the following day, veteran bush race-commentator, Colin Hodges OAM, was honoured with a large photo collage at the Calcutta, which was presented to him for his 50 years of race-calling in the western district's region from the Condobolin Picnic Race Club.

With his amazing memory, Colin kept the gathering entertained with many humorous tales from his years of race-calling, as well as a phantom Cup call naming numerous past Condobolin Cup winners as well as past winning participants.

Colin is still happy to travel the hundreds of kilometres each week to carry out his active job.

STRADBROKE HANDICAP-G1 winner, Under The Louvre is on the way to become a stud success recording his first winner, Cadboll, which showed determination to win over 1100 metres at Sale, Victoria, recently.

A son of former Coolmore Stud shuttler Excellent Art, Under The Louvre belongs to the female-line of Vista Anna, a wonderful family established by the Cobcroft family of a pastoral company of Willow Tree, a successful group of horses which still persists in pedigrees today.

Standing in Queensland at Grandview Stud, Peak Crossing, Under The Louvre only has 40 live foals among his first crop.

Another Queensland based sire, More Than Ready horse Kiss And Make Up, and Victorian based Wolf Cry, are other sires which have been represented with recent first two-year-old winners.

Aquis stallion and ATC Todman Stakes-G2 winner Kiss And Make Up flew his flag via debut winner, General Phelps, which found the winner's stall at Grafton last week. It was a very satisfying win for Ballina trainer Steven Phelps, who not only trains the colt, but also prepared the colt's dam Rose General (General Nediym) to win seven races.