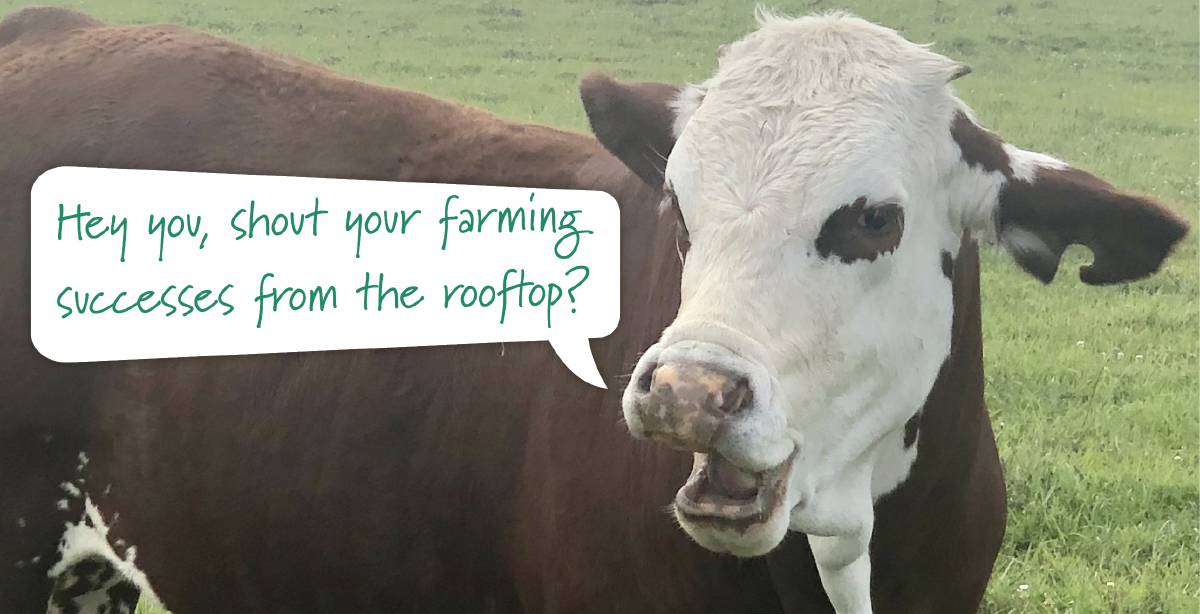 This Braford steer agrees you are certainly not "up yourself' if you promote why you love what you do.

The Land journalist Samantha Townsend says you are not "up yourself" if you promote your beef story.

Meghan Markle announces she is pregnant and we make a big song and dance about it.

West Tigers win the National Rugby League grand final (we can only live in hope) and inner western Sydney are dancing in the streets.

But when a farmer tops the local saleyards with their impressive line of cattle, they don't want to talk about it.

Sure there are some that are happy to tell their story, others just walk away without a word but the usual response is: "Nah mate, I don't want to do a story, I don't want people to think we are up ourselves" or there is the "Our mates will give us a hard time if we are in the paper".

Having been in media and agriculture for more than 20 years, not much has changed.

More than a decade ago wool producers had until 2010 to come up with an alterative to mulesing as animal rights groups campaigned global retailers to boycott Australian wool.

I spearheaded a media campaign to send the message to animal rights groups to "get off our backs" until wool producers came up with an alternative.

We garnered support from our own celebrities to support Australian growers from fashion icons to musicians and sporting heroes.

But it was met with roadblocks most of the way, with industry wanting to put their head in the sand rather than tell their side of the story.

A year later a ban on live exports to Indonesia crippled the $330 million industry and affected bilateral relations with a crucial regional partner.

Instead of telling the positive stories about those that were doing the right thing, industry opted to be silent for days before it came out with a reactionary response.

We're a decade on from that live export ban and looking back, what has changed?

There are still horror stories from extremists' campaigns.

There is still mulesing and live export issues.

There are people trespassing on dairy farms.

And the livestock industry is still being attacked and being used as a soft target for the climate change debate.

Politicians might have introduced a right to farm bill, but what are we doing to educated the broader community about why beef and dairy is an important quality source of nutrition?

Sure there has been some expansion on how farmers and industry are using social media.

But when compared to those that want to shut farming down, farmers are mostly absent in the conversation.

Much of the debate is reactionary to an incident, rather than proactive.

So my first question to producers is; does your industry lack leadership and is not telling the stories that need to be told?

Is industry not clear about the message it's selling, or are farmers just too busy earning a quid?

Whatever the reason, farmers should take the bull literally by the horns to sell their own message.

If you don't want the nut milk latte sipping sets dictating the conversation, or the vegan fake meat industry increasing its market presence, what are you going to do about it?

I'm fed up with the comparisons of the...'long gone are the days of the straw chewing, checked shirt wearing farmer'.

It's cliched and well past it's used-by-date.

Just tell the story for what it is, that today's farmers are savvy, innovative business men and women who implement cutting edge technology and who are leading the world in animal welfare.

Don't hinder the conversation by succumbing to tall poppy syndrome.

Tall poppy syndrome is our nation's worst trait, which is also rife in the agriculture bubble.

Step outside that bubble and get better at telling your story, even the smallest of achievements.

Shout it from the roof tops to say why you are the best in the world at growing food and fibre. Shout about your successes.

If you aren't sure, follow in the footsteps of that brave bunch who are on social media showing what's possible.

You are certainly not "up yourself' if you promote why you are so bloody good at what you do and what you love.

Who else knows your industry and story like the back of your hand? Nobody but you.

So there is no excuse.