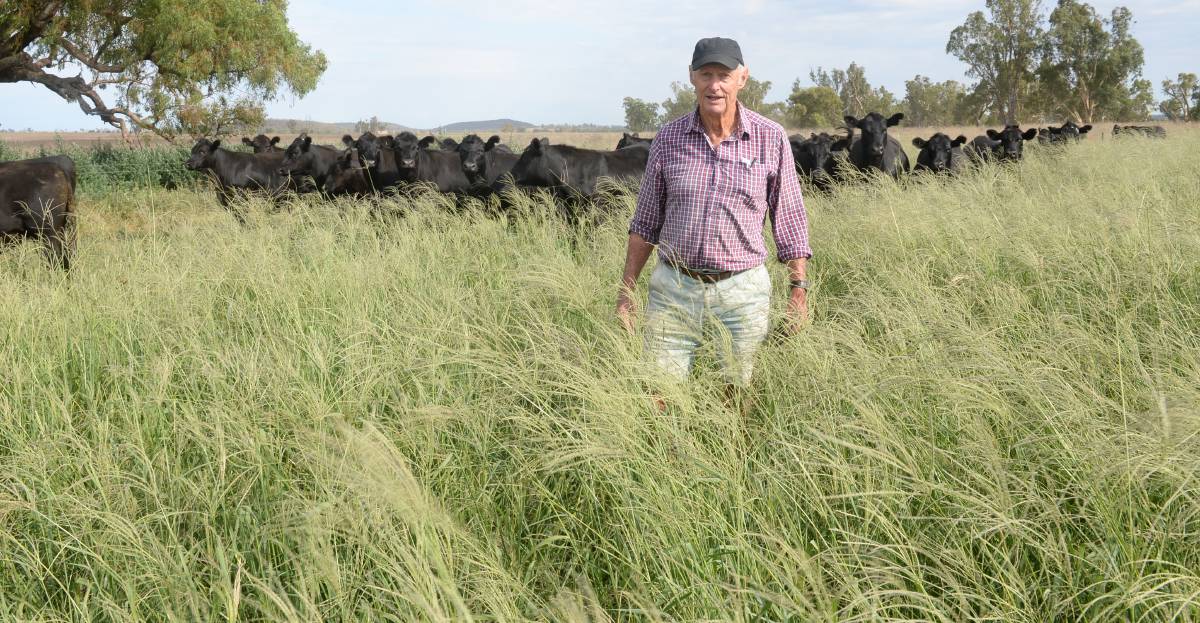 Ross Dunkley in his paddock of Premier digit grass and bambatsi panic with 40 Angus steers grazing at Myrtledale, Geurie. He says he should have 80 head to utilise the feed.

Premier digit grass with a dash of bambatsi panic is doing wonders for Ross Dunkley's steers, fattening them at a fast rate.

DROUGHT put an end to Ross Dunkley's lucerne stands in paddocks of loamy to heavy basalt soils along his Little River frontage at Myrtledale, Geurie.

Looking at a 15 hectare paddock, Mr Dunkley said it used to support very good Hunter River lucerne variety stands when growing up to 25 years or more ago.

"We'd grow lucerne for four to five years for seed production, then lock it up for sheep grazing."

"The last drought put an end to lucerne production and catheads took over."

He runs a 400ha spread which used to run sheep for prime lamb production, but in the past 20 years has traded steers, growing them out to bullock weights.

"I considered myself as a bullock fattener for a number of years, but now we're targeting the feedlotters and doing some backgrounding."

Premier digit grass with a sprinkling of bambatsi now covers the paddock as high as the necks of 40 young Angus steers grazing it.

"A neighbour over the road had sown some and it's been a talking topic of late, so I decided to try it," Mr Dunkley said.

"I began preparing the paddock in January last year and gave it a first weed spray on March 27.

"Then with the February rains came the catheads."

The grasses were sown last November with an air-seeder at four kilograms per hectare of Premier digit with a handful of Bambatsi panic together with 50kg/ha of Starter 15 super, one centimetre deep in 10 millimetre spacings.

He said he added the bambatsi just to see how it would go, and was delighted and surprised with its establishment and setting out of runners.

January and February rain this year has made it grow thick and quick, Mr Dunkley said.

"I bought the seed from George Avendano, Barraba, who has been growing digit for 30 or so years," he said.

Up until mid-February Myrtledale had received 116mm of rain.

At present he has 40 Angus steers grazing on the digit grass and they can't keep up with the grass growth.

"I think I should really have about 80 on this to keep the grass under control and fatten the steers," he said.