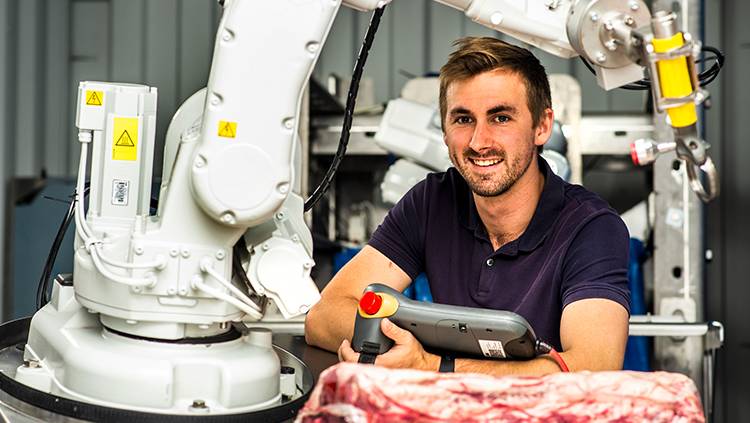 Abattoirs might be the last place you'd expect augmented reality, but one young researcher's innovative thinking might have slicers wearing AR goggles by the end of this year.

His efforts earned him two awards at 2021 Science and Innovation Awards for Young People in Agriculture, Fishers and Forestry on Thursday, including the major award - The Minister for Agriculture, Drought and Emergency Management's Award.

The technology he is developing and is hoping to roll out this year gives processors real time sensory image of what is happening inside the meat by overlaying an ultrasound with augmented reality.

By giving slicers a clear image of exactly where the best cut of steak is, the technology aims to prevent yield loss in the red meat processing industry, currently worth an estimated $89 million in Australia.

"This is an incredible opportunity to address a number of the issues being faced by the industry, utilising advanced sensing and imagery equipment, as well as robotics technology," Mr Border said.

Both awards earned the young robotic engineer $44,000 for his research.

"As a young researcher, this money means I can get my hands on equipment and start doing this research properly," Mr Border said.

"With out this award, and the money from the award I'd have no chance of doing this research."

"Excitingly this project also has the support of a number of local processors in the Toowoomba and Darling Downs area, so it is exciting to be working directly with industry on a project that will have on the ground impact, and further strengthen the connections the University of Southern Queensland has with the agricultural sector."

Due to COVID restrictions the award ceremony was conducted digitally over video chat for the first time. Despite being an event for the tech savvy, the irony was not lost on Mr Border when he didn't hear that he won the award.

"When the minister announced I won, I didn't hear anything and then I saw that I was unmuted. I didn't even know if I won, but I just started speaking."

"I can do robots, but Zoom will get me every time."

Dr Faraji Rad from USQ's School of Mechanical and Electrical Engineering also took home one of the eleven national industry Science Award categories. Named the recipient of the CSIRO Biosecurity digital innovation Award for her research project designing a microneedle patch to rapidly diagnose plant diseases in the field.

"I am looking to integrate biosensors in the patch, which will allow pathogens to be quickly detected on the farm, and the extracted sample also could be sent to the lab for processing or further analysis," Dr Faraji Rad said.

The Science and Innovation Awards for Young People in Agriculture, Fisheries and Forestry are awarded annually to scientists, researchers and innovators between 18 and 35 years old who have a project that will benefit Australia's primary industries.