Brussels sprouts are a great source of fibre and vitamin K and C in the human diet, but one of the nation's largest growers have found the small vegetables are just as good for cattle. 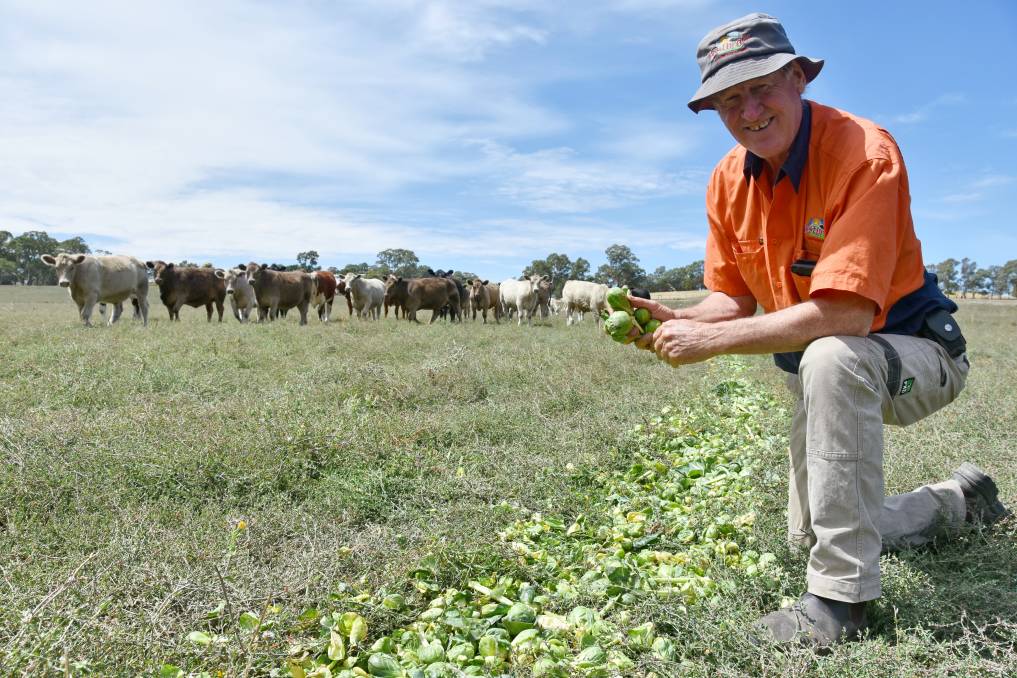 Brussels sprouts are a great source of fibre and vitamin K and C in the human diet, but one of the nation's largest growers, the Samwell family, Eastbrook Vegetable Farms, have found the small vegetables are just as good for cattle.

For the past decade or so, the Adelaide Hills growers have been value-adding many of the brussels sprouts that don't make the grade for consumers by feeding them to their cattle. Leigh Samwell says they have received good carcase feedback, especially on the meat colour and marbling of their cattle.

The Samwell family have been growing brussels sprouts for more than 60 years. Eastbrook Vegetable Farms was established by Leigh's father Ray in 1952. Leigh with his brother Kent and their sons Scott, James and Luke have expanded the original 160 hectares at Mount Barker with 44ha at Nairne and 296ha at Langhorne Creek.

They supply supermarkets across Australia, as well as the Adelaide wholesale markets and also have a farm stall just off the South Eastern Freeway at Mount Barker.

Leigh says brussels sprouts can only be grown on the same land once in three years, and this land would lay idle if not for their hay production and livestock between rotations.

They may be the wrong shape, have a black spot on them or a yellow leaf but our quality standards are high so they need to look right for people buying them in the supermarket. - LEIGH SAMWELL

"There is a lot of leafy rubbish after the sprouts are harvested so we put the cattle in to try and clean it up, then we work it up and put in the ryegrass for hay production."

Leigh admits they have to be careful which paddocks their cattle graze to avoid compaction, but says livestock have been a game-changer in turning tonnes of brussels sprouts rejected in their packing shed into beef.

"They may be the wrong shape, have a black spot on them or a yellow leaf but our quality standards are high so they need to look right for people buying them in the supermarket," he said.

"The cattle don't care, they love them."

He says it only takes a few loads for cattle to get used to eating brussels sprouts, and they soon come running when the vehicle with the open-sided trailer enters the paddock.

Up to 8 tonnes a week are trail fed to their 120 cattle, which they buy in as 250-kilogram weaners at five to six months of age.

The Samwells' aim is to grow them out to 600kg in 12 months to be sold on-hooks to Teys Australia's Naracoorte abattoir.

"We bred (cattle) for a couple of years and I loved it but it doesn't suit what we do so we have gone back to buying and fattening," he said.

It was the start of a good relationship which has seen Mr Eylward help the Samwells buy in Murray Greys from South East breeders.

Two more consignments have been delivered to the property in the past couple of months, replacing steers and heifers that were processed in February. These all had Meat Standards Australia marble scores between 340 and 480 at 275 to 300kg carcase weight.

"We have had all sorts in the past including Angus and Herefords but we have been able to get some nice lines of Murray Greys and they are lovely cattle to handle," Leigh said.

"We are getting good feedback on the pH and meat colour of the cattle, the only thing I can put it down to is the brussels sprouts."