Original macadamia plantations on the Northern RIvers are struggling from tree canopies that are too tall and dense. One farm rectified that and more to increase yield.

The new season nominal price for macadamias has fallen 15 per cent from an all time record high and while returns remain profitable there is an expectation that rising supply will push price back to about $4.50 a kilogram for nut in shell at 10pc moisture. If this scenario eventuates it would equal a 25 to 30pc financial fall from its peak.

"A price of $4.50/kg is brilliant if you get production up to where it could be," says consultant agronomist Janus Erasmus. "But there is a need for long term investment on the input side. For instance 3t/ha over a 50ha farm looks profitable at that price yet at 4t/ha there can be another $225,000 worth of production."

At Summerland Farm on the Alstonville Plateau, above the ocean at Ballina, 35 hectares of mature nut trees grow adjacent to an avocado plantation on volcanic ferosol.

Both commodities grown here are facing market pressure with so many new plantings. Supply is expected to more than double by mid decade.

The farm is a diverse enterprise that includes disability services for staff, a processing and packing shed and restaurant. When the farm's horticultural manager Chris Smith and farm co-ordinator Shaun Reynolds sought help in rejuventating production they turned to Mr Erasmus, whose premise is to balance the soil.

Trees at Summerland Farm date back to 1983 and as they have grown in an environment that dumps 1.8m of annual rain over an average 121 days the limbs have grown to connect over the rows. No grass grows underneath and soil is washed away.

A bare floor is ideal for harvesting nuts off the ground but this exposes fragile surface roots with the result that yield in response to tree health has declined.

"We looked at all facets of this farm, not just nutrition," said Mr Erasmus, who trades under the brand Grid Farm. "We looked at pruning, orchard floor drainage and mapping of individual elements like calcium and magnesium." 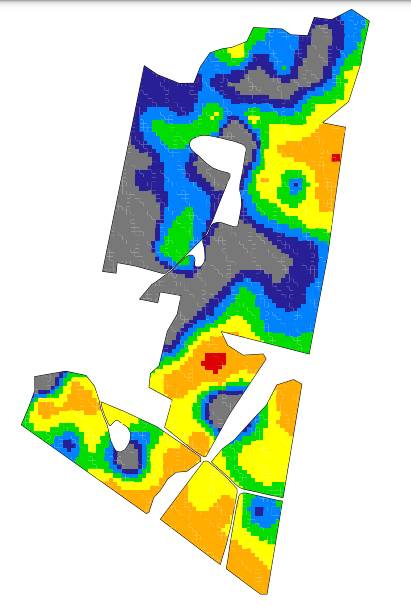 Phosphate levels in Summerland Farm's red ferrosols vary from 5 to more than 55 parts per million when the optimum should be 25-35ppm, marked light green on the map. Mapping nutrients first then applying variable rates of fertiliser will help fix this issue.

The express aim of his approach is to "fix the cation ration" and to achieve this he incorporates latest technology to apply fertiliser as and how it is needed using digital cartography.

Soil tests at the rate of two every hectare provide ground-zero data points from which the maps are built. The data framework is interpreted by algorithm to draw colour coded digital maps that are then fed into the navigation system on board a variable rate spreader.

"In traditional applications of phosphorous and calcium there is either not enough or too much applied 70pc of the time," he says.

"With a variable rate spreader and grid mapping there is 100pc correct application. The cost is offset by increased production and we will see yields even out across the farm."

The job doesn't necessarily lead to a cost savings - at first - especially if a farm's inputs have been tightly managed.

At Summerland Farm their fertiliser bill doubled in the first year of what is so far a five year program of improving soil balance through cation ratios.

Mr Erasmus predicted a 20-25pc increase in production that will more than pay for the program and provide lasting benefits in orchard health.

In places the farm was recording yields as low as 1t/ha. With the heavy application of organic matter their yield doubled to 2t/ha but the orchard still wasn't performing.

"The potential was there to get over 5t/ha but we had to invest in inputs," said horticultural manager Chris Smith. Older orchards grow a canopy that excludes light and grass from growing beneath the trees, leading to erosion, nutrient loss, exposed roots and a reduction in soil microbiology.

Selective limb removal has allowed more light onto the plantation floor with self sown mixed species pasture now established in the portion of the orchard trimmed first.

All wood is chipped on the spot and spread on the orchard floor where it and the new grass becomes a nutrient sponge that returns those essential ingredients to the soil after mowing.

"We're not taking anything away," points out Mr Erasmus. "And we're producing cheap organic matter.

"We weren't sure what would eventuate and so we took a little bit often," he said.

But it made a difference and four years into the project the floors under trees in those first blocks are covered in a diverse pasture.

Being in such a high rainfall area fertiliser application was previously being wasted, as much as a third of nitrogen in a severe event would wash down the creek when applied at intervals far apart.

By applying a little more often - 10 times a year - the uptake was improved and the runoff waste minimised.

To deal with nuts caught in tall grass farm staff designed and built a narrow scarifier that can be towed behind a zero turn mower that rips the grass to its roots and flicks nuts into the clear.

"As farmers we're smartening up," said Mr Reynolds. "We produced 3.8t/ha last year, up significantly, although the wet weather this year will affect that number. In future we won't allow trees to grow so tall."