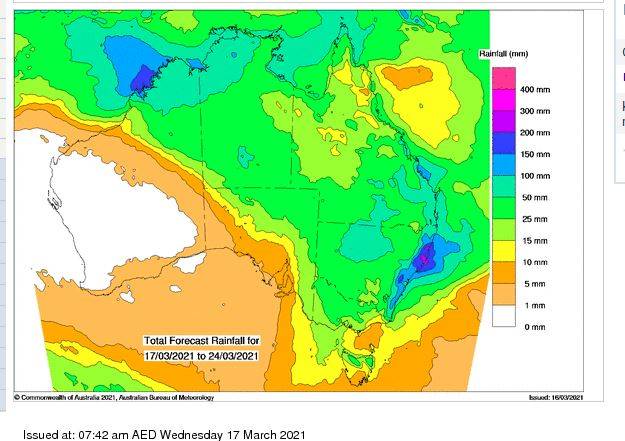 NICE OUTLOOK: The BOM's 8-day forecast is promising for those in eastern and northern Australia.

There has already been excellent rain over the past fortnight in parts of NSW and now Queensland and there is more on the way.

IN THE SAME week the Bureau of Meteorology announced the La Nina weather event, correlated with above average rainfall for much of Australia, was nearing its end, a complex series of weather systems is delivering a final parting gift for farmers.

This week parts of the parched Central Highlands and Maranoa regions in Queensland have already received as much as 100mm, with BOM forecasters predicting similar tallies over the next two days.

From there the focus switches to coastal areas from Rockhampton as far south as the Illawarra in NSW, before far western NSW and potentially pastoral parts of north-eastern SA are expected to get their turn over the weekend.

At the very end of the outlook period there are models showing that parts of Victoria and south-eastern SA could also enjoy good early autumn rain, but there is no consensus on that this far out.

It marks a good follow-up to a week of rain, particularly over NSW and Queensland.

In the week to Tuesday there were falls of 124mm at Inverell, Orange 120mm and Moree 72mm in northern NSW, while on the Monaro and Southern Highlands Goulburn had 50mm and Cooma 44mm.

Through Queensland, Clermont recorded 129mm to 9am Monday, Roma has had 80mm for the week to Tuesday afternoon, with rain still falling and higher tallies in excess of 100mm recorded nearby, Tambo 70mm and Mitchell 50mm.

The heaviest rain in Central Queensland was in the west of the region, in a line west of Emerald, refreshing farmer hopes after a dry summer when they had been hoping for La Nina inspired wetter conditions.

BOM forecaster Jackson Browne said there were two distinct weather systems causing rainfall, with a blocking high in the Tasman Sea stopping the lows from pushing out to sea and leading to the sustained falls.

"There is moisture being swept down from the tropics and being caught up in an upper level trough and then moist onshore air from the Tasman will be a big part in the coastal falls," Mr Browne said.

"We'd expect daily falls of 25-50mm today (Tuesday) and Wednesday in that Maranoa and south-western Burnett region before the focus moves to the coast," Mr Browne said.

He said the rain so far, combined with what is expected, would help patch in an area that had been dry throughout the La Nina event.

"There have been areas that have missed out but hopefully they can get a decent drop out of these systems," Mr Browne said.

"It's been patchy all summer but this rain is filling things in a little," Mr Miller said.

"We've had some good spots, such as halfway between Roma and Surat, which has received 300mm already this year, but plenty of places hadn't seen much until now," he said.

Mr Miller said there had already been a run on oat seed as farmers looked to get autumn feed up and out of the ground.

"We've had orders for 40,000 hectares' worth of wheat seed and 6000ha of chickpeas and that is just us here, so people are planning to plant winter crop." 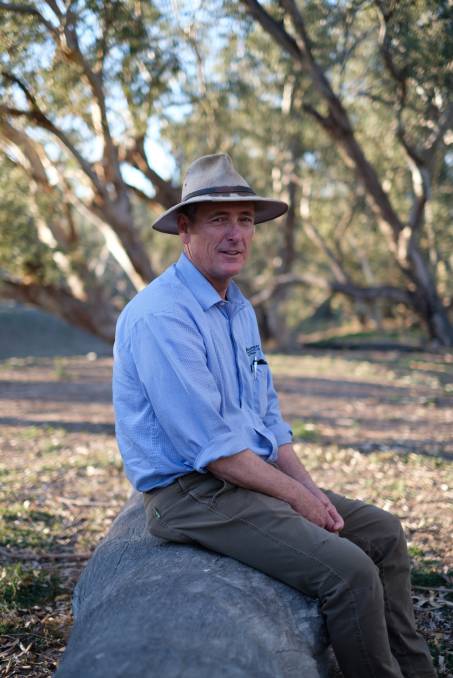 Further south at Walgett, in north-western NSW, agronomist Greg Rummery said it had been a patchy, but useful start to the upcoming winter cropping season.

Mr Rummery said there had been up to 100mm in the past month in the broader Walgett area, with the best falls generally to the east, but said there would still be farms on the dry side prior to the forecast rain this weekend.

Farmers in the north-west, renowned for its ability to grow big crops in good years, but equally notorious for horror droughts, are eagerly anticipating the rain.

"It is switching about still but broadly it looks like we could see 20-60mm around here," Mr Rummery said.

"If we were to get the upper end of the scale it would set things up nicely."

"We had a good crop year last year generally, but there was only just enough moisture, we never really built up the soil moisture profile and parts north towards the border have been pretty dry, so a good drenching would be great."

He said growers that had received rain already were planting forage crops, with the first of the grain crops to go in around mid-April.