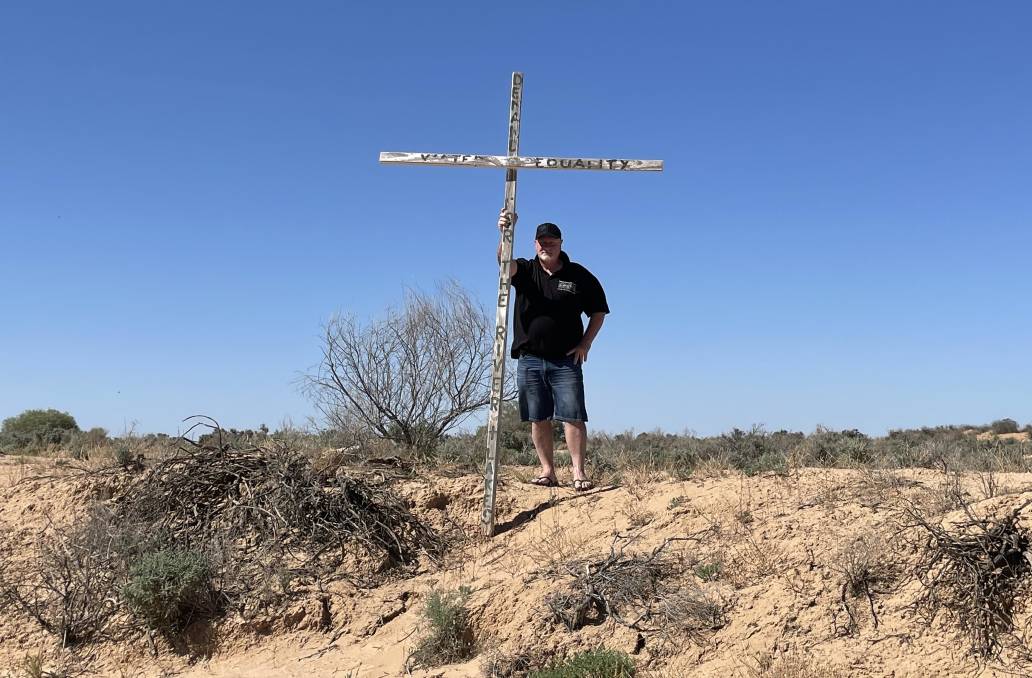 Darling River Action group's Darren Clifton holds up a cross at the bank of a dry Lake Menindee. The NSW government have confirmed that they are stepping away from the Menindee Lakes SDL water-saving project, which was criticised by the community.

Gov says they will not pursue a project that does not have community support.

The NSW government have confirmed that they are stepping away from the Menindee Lakes water-saving project.

A spokesperson for NSW Water Minister Melinda Pavey said the Department of Planning, Industry and Environment (DPIE) announced it will suspend discussions on the project and instead focus on other issues around water reliability and quality.

They added that, as the Minister has stated previously, the current 2024 deadline under the Murray Darling Basin Plan was not realistic and additionally the (NSW) government will not pursue a project that does not have broad community support.

The announcement puts a big question mark over how the Basin Plan recovery targets will be met, as the Menindee Lakes water-saving project forms a crucial part of the Plan's Sustainable Diversion Limit Adjustment Mechanism (SDLAM). NSW Water Minister Melinda Pavey said the NSW government would not pursue a project which did not have broad community support.

The SDLAM projects were estimated to save 605 gigalitres of water, allowing for a reduction in the overall amount of water returned to the environment via buybacks.

The Menindee Lakes project was posed to save 106GL of the 605GL total by reducing the surface area of the lakes, increasing their depth and using stored water more quickly. However, the project was widely criticised by the Menindee and Lower Darling communities.

Responding to the announcement, federal Water Minister Keith Pitt, who has ruled out any further buybacks, said he had received no formal notification that NSW had taken this position but indicated he was willing to make compromises.

"The Commonwealth has put significant money on the table to upgrade Menindee in a way that supports local communities and achieves water savings," Mr Pitt said.

"We can be flexible in the implementation approach of the project."

DPIE (Water) made the announcement that they were suspending discussion on the project at a recent stakeholder advisory group (SAG) meeting.

Discussions between community stakeholders and the Department broke down earlier this year when SAG chairman, grazier Terry Smith advised the government that they would not engage with them on the project until the health of the river and its communities downstream were placed ahead of upstream commercial interests.

Mr Smith said the government's new position on the project was a step in the right direction but the "ball was now in the DPIE's court for them to prove they were serious about bringing meaningful change to the river system."

"The fact they've stepped away from the Menindee Lakes project is a win...there was nothing in the project that would have had a net gain for this community or the local environment, but I don't think anyone's too excited yet, we'll wait until we see some water," he said.

Mr Smith said their basic argument throughout discussions on the project was 'how can you have a water savings project if there is no water in the Lakes to save?'

The Menindee Lakes are currently 18 per cent full and Lake Menindee itself has not filled since 2017.

Mr Smith said the community would like to see storage targets for the Lakes system reinstated.

"Previously there were storage targets because the water was needed to supply Broken Hill, but this was withdrawn when the Wentworth to Broken Hill pipeline was built," Mr Smith said.

Member for Barwon Roy Butler said the Minister's new position on the issue was heartening to hear and he supported the implementation of a storage target for the Lakes.

He said he also wanted the Minister to look at improving the Lakes release strategy.

"We remember back in 2016/17 when the lakes were at 40pc and water was raced down onto the Murray, which was already struggling with the amount of flow it had, so a lot of that water ended up going over bank - which meant it was environmental water that ended up killing trees," Mr Butler said.

Mr Butler, a member of the Shooters, Fishers and Farmers party, said he also wanted to see a review of the rule which allows control of the water in Menindee to be transferred from NSW to the Murray Darling Basin Authority when the Lakes reach a 640GL trigger point.

Calls to prevent a fish kill next summer

However, Mr Smith said there is an even more pressing matter facing the Menindee community - preventing another fish kill, as seen in the summer of 2018/19.

"The unfortunate situation is Menindee only has 10-months of water supply now and the rain event predicted in the next few days could be the last chance we have to prevent another environmental disaster," he said.

Mr Smith said they had been lobbying the government to implement temporary water restrictions (under Section 324 of the Water Act) in order to allow enough flows to reach Menindee to get them through next summer.