Last October's Burrawang ram sale broke world record at $5208 for the Dorper and White Dorper breeds, but today's sale topped that by $31 at $5239 for 125 rams. 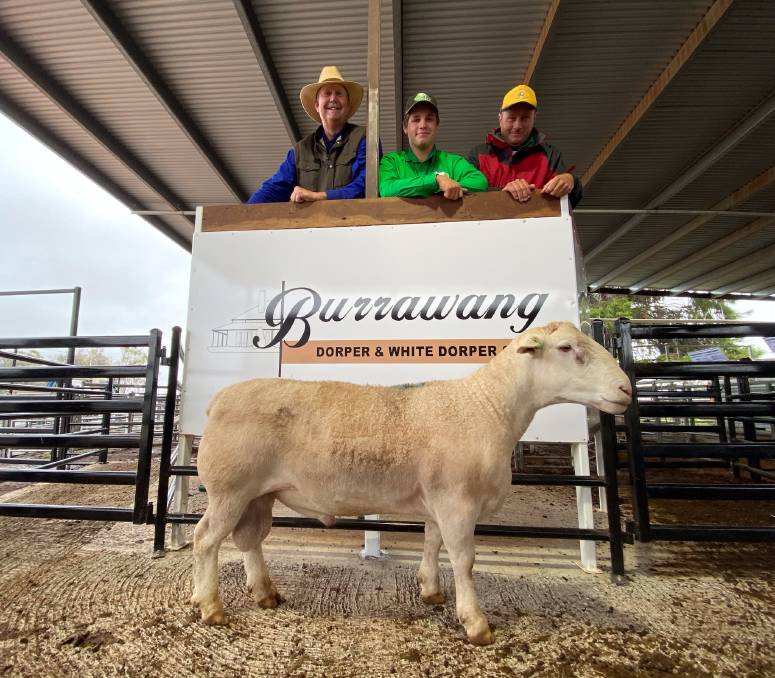 The $26,000 sale-topper was the Type 5 Burrawang Dusty, weighing 118 kilograms sold the Wald family of Hamish and Penny, and Alex and Callum, Banar, southwest of Condobolin, who recently purchased the well-known Tullinga stud flock from Robin Sanderson and Anne Coffey, Condobolin.

Hamish Wald said his family were given a wonderful opportunity to purchase the Tullinga stud flock.

"Robin and Anne have put some 15 years into this stud and have left an outstanding base for us to continue," he said.

This 20-month-old ram displayed an eye muscle depth (EMD) of 48 millimetres and in the top 10 per cent of his peer group for early post-weaning (EP) and weaning weights.

"He's an exceptional animal, a stand-out ram," Mr Wald said. "he has terrific growth, muscle, a deep flank and carries it all really easily.

"He will give us that big incremental step up to take our flock forward to the next level."

Mr Sanderson will sell his young rams this coming September.

Two Dorper rams sold for the equal top price of $11,500 to Gary and Janice Fiegert of Melashdan Dorpers, Tumby Bay, South Australia, who purchased three rams for a $10,667 average.

Also returning were Mark and Julie Cullinan, Kellen Holdings, Wentworth and Pooncarie, who paid the second top price of $15,000 for Burrawang Phill, a son of the 2019 National supreme champion exhibit, Burrawang Piet and from a dam holding Gert Lotter and Burrawang bloodlines. Phill weighed 114kg at 32 months.

Volume return buyers where the Crozier Family of Allan and sons Richard and Ben taking home 29 rams for flocks on their Marfield Station and other properties in the Ivanhoe - Wilcannia region, while payng up to $7200.

Allan Crozier said the operation would currently be running up to 13,000 head and was working towards rebuilding numbers.

"Like everyone else, we still need more rams, but have been buying at Burrawang since their third sale," he said.

"The Dorper is a great animal. They do well in low rainfall country and I don't feed them. They go as the season dictates.

"The best thing is they fit all markets from paddock lamb, heavy export or trade."

The flock lambs twice a year in October/November and Mid-March through the May.

"We can get our autumn lambs off at four months if the season is right and we get a decent winter. The twice a year lambing makes the breed very versatile."

Clayton Griffiths, Pan Ban Station, Pooncarie, bought 10 rams for a $4660 average at topping at $5200 for a Burrawang Shifter son.

The sale was conducted by BR & C Agents, Swan Hill, Vic, with Jason Morrison and Joe Reilly the auctioneers.