OUT OF POCKET: That National Farmers' Federation says workers who suspect they have been underpaid while working in horticulture should report to the authorities. Photo: Shutterstock

The NFF has responded to the Unions NSW horticulture wage theft report.

THE National Farmers' Federation is urging horticulture workers who believe they have been underpaid to report their experience to the relevant authority.

It's also tagged the release of Unions NSW report into farm pay rates as a "stunt".

The report which suggested young workers in Australia are being paid as little as $1.25 per hour and exploitation of migrants is rampant on the country's farms.

The 24-page report was based on a survey of job advertisements for fruit-pickers and interviews with workers nationwide.

The report's authors reviewed more than 1000 ads published, mainly on social media, between December 2019 and September 2020, while also interviewing more than 100 horticultural workers.

Of the workers interviewed, none met the minimum legal wage, while 88 per cent of job ads promised "piece rates" rather than an hourly wage, meaning workers were paid per volume of work.

"It is crucial that you have a positive experience on farm, which begins with being paid the award wage," Mr Mahar said.

"Instances where an employer allegedly hasn't complied with their legal obligations must be taken up with the Fair Work Ombudsman.

"The large majority of farmers do the right thing. They want workers to enjoy their job and value the farmer-worker partnership in putting food on shelves; fueling the economy and sustaining regional communities."

"Operators who don't uphold the law are not only ripping off workers, but are also letting down their industry, at time when many are facing a dire workforce shortage. They must be held to account."

According to the Unions NSW report, the lowest hourly rates earned by workers were $1.25 for picking blueberries, with surveyed workers averaging between $15 and $18 an hour.

He said the horticulture sector should "clean up its own backyard" before complaining about struggling to attract workers due to migration limits.

"Have a backbone, provide minimum rates of pay and you will get your workforce," Mr Morey said.

Similar to an Australian Workers' Union call last year, Unions NSW recommends the abolition of piecework rates and a minimum wage guaranteed to all workers in the sector.

The NFF's Mr Mahar said he hoped Unions NSW had advised every individual profiled in the report to contact the relevant authorities.

However, he cautioned, against conflating piece rates with the serious issue of underpayment, saying the attempt by Unions NSW was disingenuous at best.

"Right now, a worker shortage of up to 26,000 is forcing farmers to leave fruit and vegetables unpicked to rot and to downscale future plantings.

"And, the result is a deterrent to those considering farm work - further exacerbating the farm workforce shortage. 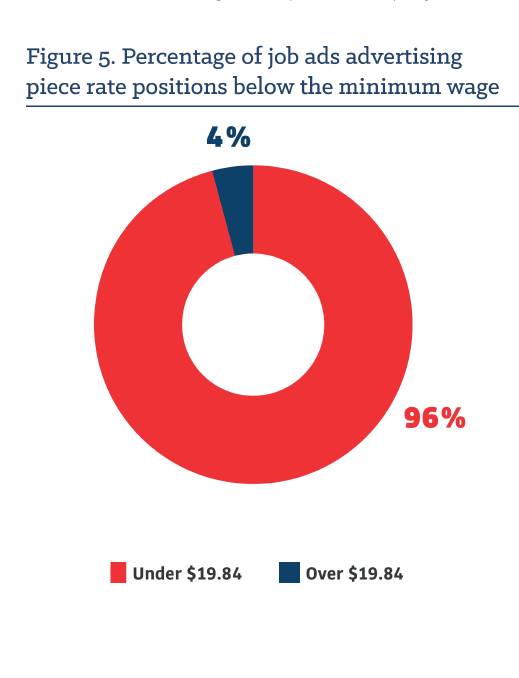 VISUAL: A graph from the Unions NSW report indicating the percentage of job ads advertising piece rate positions below the minimum wage.

"All at time when farm productivity has a lead role to play in rebuilding Australia's COVID-depleted economy."

Mr Mahar said the sector was taking action on the irrefutable evidence that more needs to be done to ensure workers in the horticulture sector have a positive experience.

"The NFF's supports the grower-led Fair Farms initiative. Fair Farms supports all members of the Australian horticulture supply chain with the tools, information and training they need to be a compliant and ethical employer.

"We have long called for the introduction of a national labour hire regulation scheme, to hold labour hire entities to account, which research shows is a link in the ag workforce, where wrong doing occurs," Mr Mahar said.

"We have also proactively worked with the Fair Work Ombudsman to address the problem.

"The introduction of a dedicated agriculture visa solution as called for by NFF for four years now, would ensure foreign workers holding the visa would only be placed with fully accredited employers," Mr Mahar said.