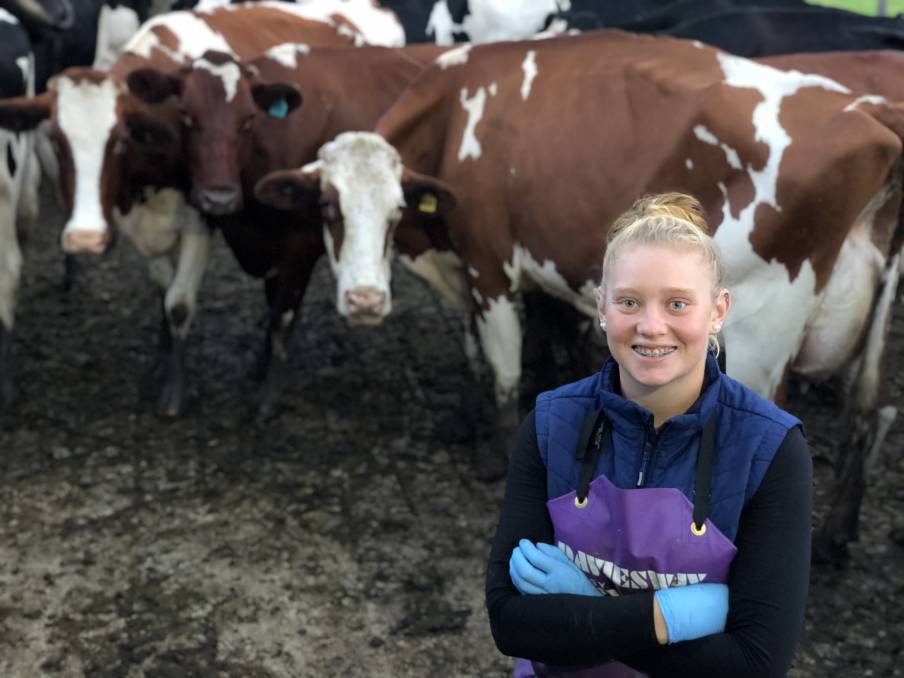 Rebecca Grant is among a growing number of young people who see agriculture as a pathway to a rewarding career. Photo: Samantha Townsend

Agriculture has become so attractive that there is a growing number of young people who see it as a pathway to a rewarding career.

It's 6am and Rebecca Grant has turned on the grain bins.

She is waiting for the cows to come into the dairy before she starts milking.

Once that's done, she hoses out the dairy and feeds the calves before heading out to help with pasture management as well as on-farm production. And she's done all this before most people have started their breakfast.

Agriculture has become so attractive that Ms Grant, who is from Kempsey on the Mid North Coast, is among a growing number of young people who see it as a pathway to a rewarding career.

She is also joining the dairy industry at a time when the sector is rebuilding after a series of challenges including drought, bushfires, low milk prices and processor rationalisation.

"I don't come from a farming background, I grew up in Sydney before I came here and it wasn't until high school that I became involved in agriculture and loved it so much I want to run my own dairy one day," Ms Grant said.

The Land can reveal NSW Government figures show that agriculture trainees from Tocal College have doubled in the last 12 months from 30 to 62, largely due to improved seasonal conditions.

It is also understood that many courses at TAFE NSW's agricultural campuses are full for the first time in years despite the Scone TAFE sell off.

Tocal deputy principal James Hooke said improved seasonal conditions combined with the employee subsidy for trainees (of up to $7000 a quarter) being extended had been driving factors for increased interest in agriculture.

"It's an innovative industry with new technology that is exciting people," he said.

Agriculture Minister Adam Marshall said whether it was dairy, rural farming or even beekeeping, primary industries was deep-seated in our roots and to see so many people upskilling boded well for our regional communities.

"These numbers we've seen come out of Tocal College are incredibly encouraging for the future of our thriving agricultural industry and I'm absolutely thrilled to see so many trainees enrolling," Mr Marshall said.

"Similarly, TAFE NSW has experienced strong growth across a number of courses this year, particularly in shearing."

Late last year, the state government announced $15 million to upskill primary producers by expanding the popular AgSkilled program. This was to include plant-based sectors, which directly targeted emerging needs and skill gaps identified by industry.