Brahman/Hereford steers from the Larsson family, Mallanganee with Keith Larsson who sold this pen, 343kg for $1650 going to central Queensland through GDL Meandarra.

Santa/Hereford heifers trumped the show on day three of the annual George and Fuhrmann weaner sales to average $1690 at 597 cents a kilogram and reaching a top of $2240 and 674c/kg.

Day three of the George and Fuhrmann weaner sales on Friday, under cover at the Northern Rivers Livestock Exchange, Casino, featured 2575 head of indicus infusion dominated by Santa Gertrudis/Hereford.

Buyers took the calves west to Goondiwindi, north to Meandarra, Qld, south to Hunter and up onto the northern New England.

The best weaners came off Tooloom country with heifers judged the overall champion pen by Matt Hann, Davidson Cameron and Co Moree, going to repeat winners John and Maree Smith, Woodenbong, making $1938 for 312kg. Their top pen of heifers made $2076 at 360kg going to repeat buyers the Fuhrmann family's Melaleuca Station near Rappville. Tooloom Valley Santa/Hereford weaner steers ready for the bidding at the start of Friday's special store sale hosted by George and Fuhrmann with Darren Perkins as auctioneer.

Jamie and Vanessa Smith, lower Tooloom, Urbenville, sold their top pen of steers for $1942 at 373kg, going to grass finisher Greg Upton, Walcha while their best heifers also sold to the Fuhrmann family for $2026 at 330kg. A single heavy heifer topped the overall sale.

Angus over Santa/Hereford with Yulgilbar blood from the Hewetson family, Mallanganee, sold back to Yulgilbar Santa Gertrudis stud at Baryulgil for $2040 at 610c/kg for 334kg.

"Our calves are 30-40kg heavier than last year," said Bill Hewetson, who farms with his sons James and Paul. "It was dry before Christmas but after the rains came they just powered away."

Santa/Hereford heifers with Yulgilbar blood produced by Jasen Somerville, Fig Tree Pastoral Clovass via Casino sold back to Yulgilbar to a top of $1990 for 316kg and also to Noel Thompson, Coraki, who paid to a top of $1719 at 268c/kg or 640c/kg. Mr Thompson also bought some of the Hewetson's calves for the same top money to average $1633. 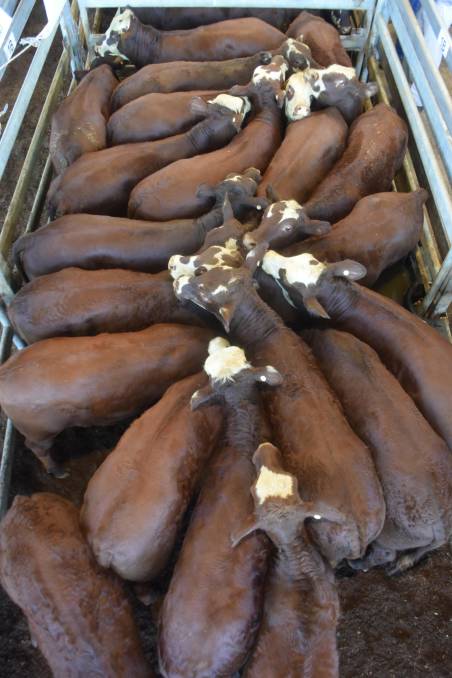