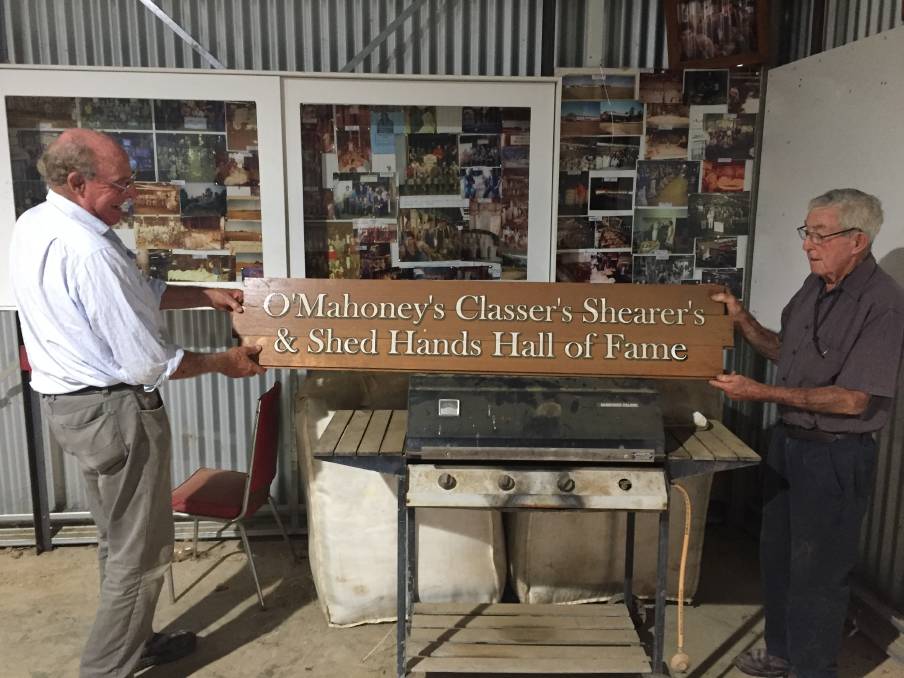 Richard Carter assisting Brian O'Mahoney with the banner in Brian's photo collection on display at the family farm.

He once held the Australian shearing record but Brian O'Mahoney said it was all in a day's work. 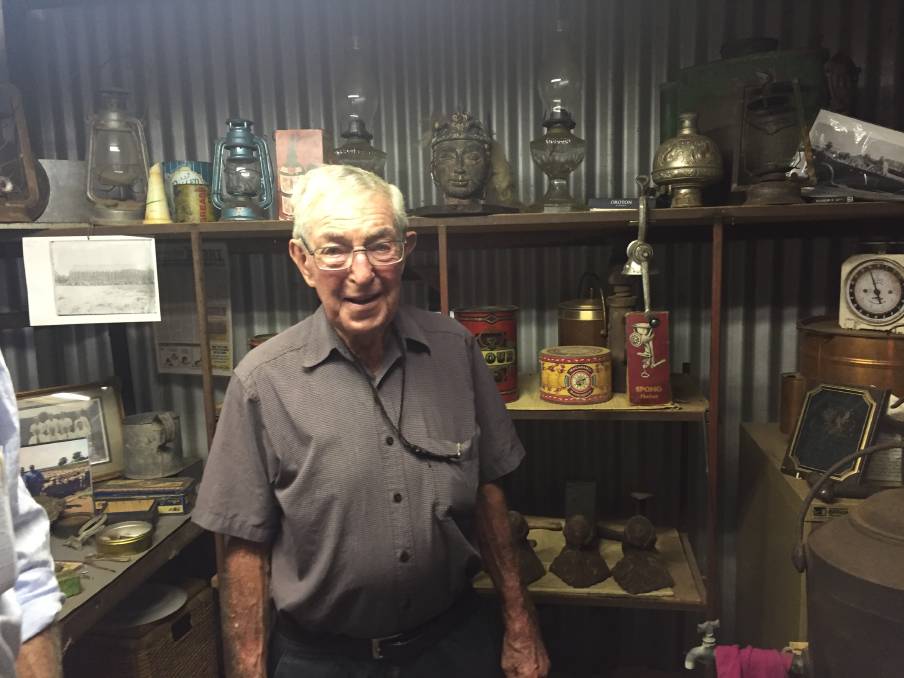 Brian O'Mahoney with his collection of family memorabilia.

In his eighth decade, Narrandera-based Brian O'Mahoney still takes an active interest in the wool industry in which he had a long career rising from roustabout to shearer to shearing contractor.

Along the way, Brian held the Australian shearing record from the day he shore 329 Merino hoggets in seven hours and 48 minutes.

It was all in a day's work: Brian remembers that he had no intention of breaking the record until the shearing contractor Jim Lipscombe came along and suggested he was close to the record.

"He said - if you have a go you will break the record," Brian said.

"It was all done according to the union rules."

On that day, Brian O'Mahoney was one of four shearers who shore a total of 1106 sheep for the day.

He said - if you have a go you will break the record - Brian O'Mahoney, Narrandera

Brian's grandfather emigrated from County Cork, Ireland in the 1860's and drew a block from country owned by Samuel McCaughey near Morundah and where his father grew up.

When he was about eight years old in 1942, Brian's father died; the 364ha (900 acre) farm was sold for two pounds, nine shillings and threepence per acre ($187.48 in 2020) and his mother, who had come from Melbourne bought the family into Narrandera.

When Brian left school and being of slight build he started to ride track work in Narrandera but was more attracted to working in shearing sheds.

He was only 16 years when he approached the Morundah-based shearing contractor Mr Yates and asked him for a job..

"He offered me a start as a roustabout because he said I was too small to be a shearer," he said.

"And I stayed with him for a long time."

Yates was one of the biggest contractors in the district, taking on renowned Riverina sheds like Silver Pines, Morundah, Tubbo, Darlington Point and Wyvern, Carathool and Brian worked in each of those sheds among many others including Uri Park, Darlington Point and sheds in the Holbrook district.

In that team and working alongside shearers with great skill and determination, it was natural Brian also became competitive and wanting to keep up with the more experienced shearers was soon 'ringing' the sheds in which he shore.

"You get used to being in teams where everyone was wanting to be the best and shear more sheep than anyone else," Brian said.

"They were always having a go each other."

Eventually Brian set up as a shearing contractor because he could see there was a greater chance of making more money.

The first shed he had as a contractor was Frank Coghlan, Tarabah, Morundah.

It was an eight stand shed and Brian led the shearing there for more than 30 years.

He also established a run around the Coleambally district where the small farmers didn't have shearing sheds and he would take his mobile shearing plant, consisting of three trucks and which took about 15 minutes to prepare for a day's shearing.

But when his friend Mervyn Shung, renowned across the Riverina at the time for being one of the leading woolclassers and in demand from the stations with big clips suggested he take on some of the bigger sheds across the Riverina, Brian looked to broaden his horizons.

Approaching the station owners or managers, Brian soon had a shearing run which included well-known properties such as Mungadal, at Hay, Booberio, near Lake Cargelligo, Tubbo at Darlington Point, Woomargama, near Holbrook and Howlong, at Carrathool.

They were exciting times when his team of six to eight shearers plus shedhands would process the clip of over 80,000 sheep annually across the Riverina and even to the Upper Murray where he shore at Tintaldra Station, near Corryong and on the Victorian side of the Murray River.

Other sheds, which reads like a roll-call of some of the great historical sheep-breeding properties included Bundure, Jerilderie, Nullabor Station, near Hay, Midgeon Station, north of Narrandera and Borambil Park, Condobolin.

Brian recalled his shearing run would start early in January and, allowing for wet weather, would work through for most of the year.

"We had very good teams which included many Aborigine who were great workers and a few characters who could often be seen on the other side of the law," Brian fondly recalled.

"There used to be around 30 shearers in Narrandera and with half a dozen contractors in town there was always a lot of rivalry to see who was the best."