Jane and Mark Holman, Dargo, Guyong, with their current drop of Angus/Wagyu which this year have been sold to a feedlot.

It's a giant hedge maze glimpsed from the highway between Bathurst and Orange, but why is it there and where did it come from?

A LAZY day with a long lunch at a hedge maze between Bathurst and Orange sounds idyllic.

It's a reality for guests lucky enough to stay at Cadogan Country House near Guyong, which forms part of a 1416 hectare working beef property.

But there's a lot more bubbling away under the surface of this picture postcard rural property that doubles as a tourist destination.

To the visitor, Cadogan Country House is a luxury, fully self-contained five bedroom home suited to groups and families.

The house is completely private and surrounded by an acre of lush cottage gardens with large shade trees.

Dig a little deeper and the owners Mark and Jane Holman reveal a deep passion for preserving and rejuvenating the ecology of the land on which their cattle graze.

Their cattle are special too: well-bred Te Mania-, Hazeldean- and Rennylea-blood Angus cows running with Wagyu bulls backed by some of the best Tajima marbling genetics.

Their beef brand, Dargo Grassfed Wagyu, has a focus on the production of hormone free, naturally grassfed Wagyu beef.

But Mark and Jane are not your typical Central Tablelands farmers.

In 2005, they were city slickers, also known as tree-changers, on the move from Sydney.

"When we purchased the property, we knew very little about beef breeding, however, we were keen to learn," said Mark, whose former career was in electrical engineering.

They started with 162ha and have since amalgamated land from some neighbouring properties to increase the size.

"We spent a lot of time looking at properties in lots of different places before finding this one," he said.

"Originally, I agreed we would give it a go [living on the property full time] for three months and see how it went.

"But really, you can't pull kids out of school in Sydney and put them into new ones for three months.

"As it turned out, moving was the right decision and there's no way we'd go back to Sydney now."

By 2008, Mark and Jane realised they wanted to do things differently and decided to focus on producing Wagyu beef.

"Since then, we have been producing first-cross Wagyu/Angus for either the live export market or to feedlots," Mark said.

The live export steers tend to go to Japan, while the heifers find a market in China as breeders.

Mark and Jane also grass finish a select number of steers and sell that beef at farmers' markets, as direct market beef boxes, as the feature product at specialty functions (such as Graze in the Maze for this month's Orange Food Week) or to guests at Cadogan Country House.

Mark said breeding quality Wagyu beef had its ups and downs. As Wagyu/Angus don't yield as well as a straight Angus, he estimated the premium needed to be about 30 to 40 per cent.

"We don't get that selling in the saleyards, so our sales are direct," he said.

They are also four years into an extensive artificial insemination (AI) program to produce the best quality Angus breeders to put with the Wagyu bull.

While they destocked during the drought, Mark said he'd like to get the breeder numbers up to about 1000 head. 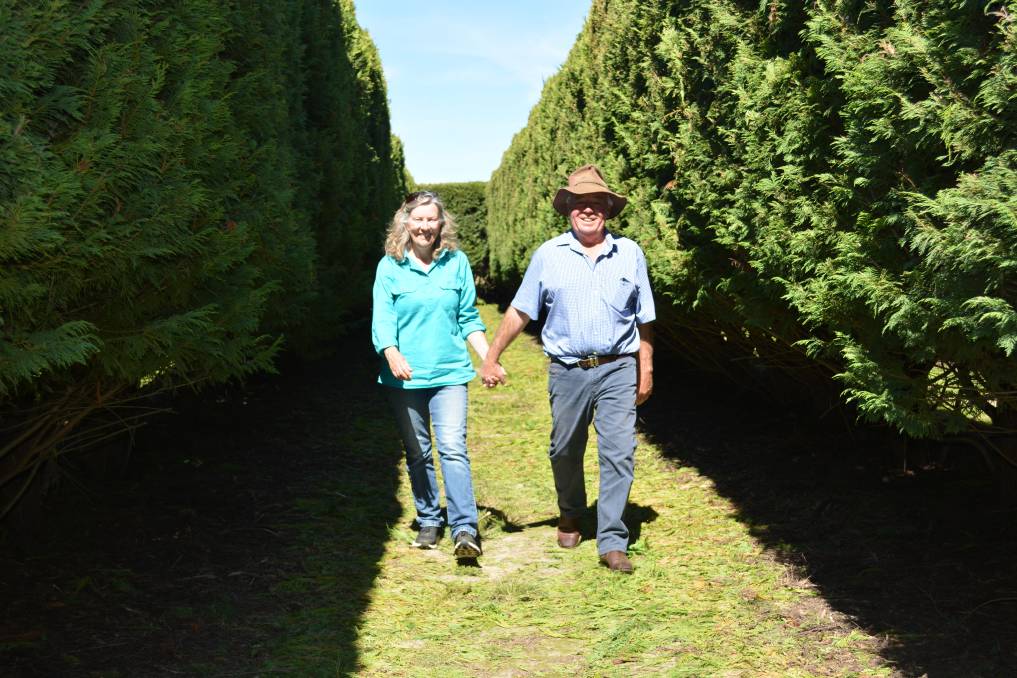 Jane and Mark Holman taking a stroll through their hedged maze which will be the location for Orange Food Week's Graze in the Maze.

And so where does the hedge maze come into things?

Jane said it was planted about 17 years ago by the then owner of the land, horticulturalist David Mansfield.

The hedge fell into disrepair for a short time after David sold the land, with sheep grazing in among the trees, before the land was sold again to Mark and Jane five years ago.

The maze pattern is roughly based on the maze at Hampton Court near London, although it's bigger and shaped in a rectangle rather than a triangle.

Mark said it takes eight to 10 weeks each year to hedge, although they have learnt that two light trims a year is better than a big trim once a year.

The maze is generally not open to the public, though it is available to charities for fundraisers and, up until before the drought, the Holmans held an autumn harvest feast for neighbours.

On Saturday the maze will feature in Orange Food Week when it hosts Graze in the Maze.

"The maze gives us pleasure and that's why we were keen to preserve it," Jane said.