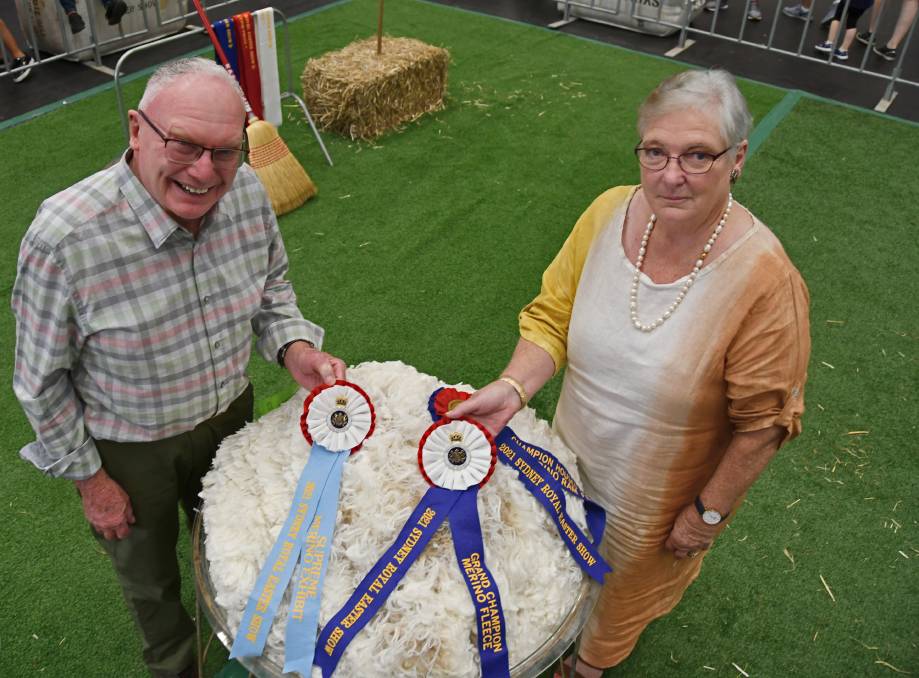 The Mudgee operation has been a long-time exhibitor at the Sydney Royal Easter Show.

IT may not be the first time Grathlyn Merino stud has taken out top honours in the Sydney Royal Easter Show's fleece competition, but this time is just as sweet.

For decades the Mudgee-based operation has been a mainstay of the royal's fleece competition and on Thursday the Rayner family added another grand champion ribbon to its collection.

Grathyln principal Max Rayner said "dedication and a lot of hard work" were the main reasons for the success.

"Due to the COVID-19 pandemic, the ram this fleece came from was meant to be our lead superfine ram to go to the Australian Sheep and Wool Show in Bendigo last year," Mr Rayner told The Land.

"However, that never happened, but because he was such a good sheep, he has been retained for stud use at Grathlyn and he is just a very good sheep."

A mainstay of the Sydney Royal Easter Show fleece competition, Mr Rayney said he couldn't remember how many times his operation had won the top prize, but "every one is special".

"My father got his honourary life membership here in Sydney for his 75th show some time ago, so I don't know exactly how long we have been coming," he said.

"It's been a bloody long time and the fleece has always been part of it.

"We've got a good reputation for showing good fleeces, I have no idea how many we've won now, but everyone is just as hard to win and just as enjoyable if you do."

Competition judge Mark Bazeley, Riverina Wool, Moama, said the winning fleece "was a very special bit of wool and the guys at Grathlyn should be seriously proud."

"The uniformity and the handle of it were just exceptional," Mr Bazeley said.

"As we went along while judging, we saw fleece after fleece, we saw some really nice ones, but when we got to that one, I thought this one was a bit better than your average bear.

"Wool is a tactile fibre and my hands really told me that this was an exceptional fleece.

"I think for a fleece as fine as that, the weight was really handy on it too and it certainly didn't disgrace itself in the weight department, which is really important."