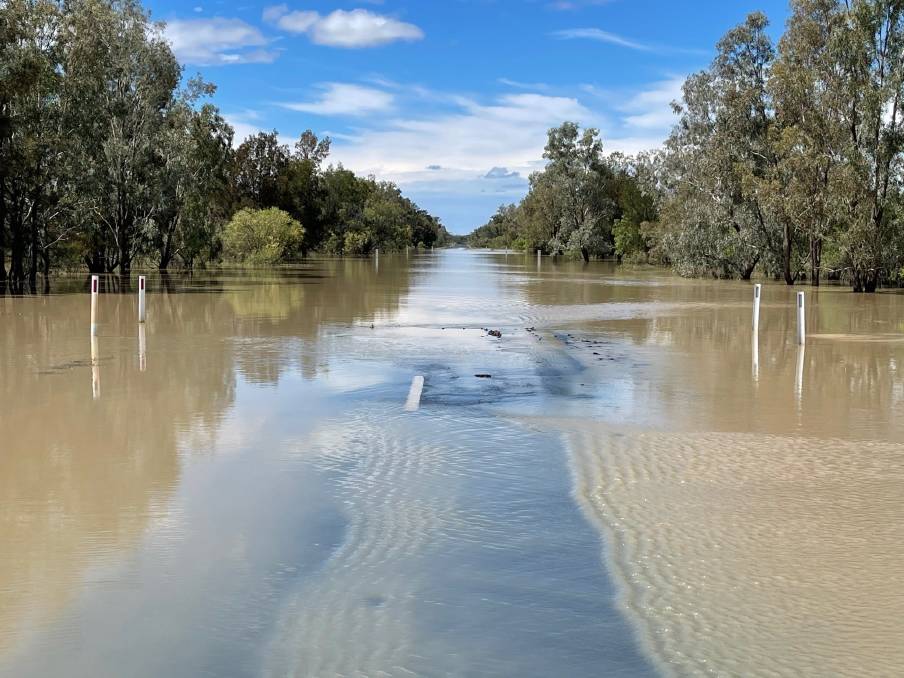 Flooding on the Carnarvon Highway at Mungindi. Photo: NSW SES

The Mungindi community remains in good spirits despite predicted flooding.

MUNGINDI may have been cut off from the outside world by flooding, but you wouldn't know it talking to some of its residents.

Locals have been busy preparing for the Barwon River to reach its peak, which the NSW State Emergency Service (SES) predicts may happen on Wednesday.

The SES and other emergency services have been dropping supplies into the town via helicopters during the past several days and Moree Plains Shire Council have given the green light to some trucks to access the area.

Despite the challenges, locals have remained upbeat and Mungindi Progress Association president Leslie Carley said "there have been no dramas".

"I've had quite a few people call and reach out to me asking how is the flooding but to be honest, you almost forget there is flooding," Ms Carley said.

"The SES have been amazing, they have been so professional and so helpful throughout this period that they make you almost forget it's even happening.

"They give you the impression that nothing is wrong and I think that's really what's helping everyone stay calm.

"I think things are looking up because I heard the road to St George is open and we're a pretty tough community, so we are just pushing on."

The Barwon River at Mungindi is expected to peak at the major flood level sometime on Wednesday or Thursday and has been the result of a flow-on effect from nearby floods last month.

However, fellow Mungindi resident Anna Harrison said most locals felt the flood event was "not catastrophic".

"We've had nearly two weeks of full isolation from the outside world, but we have been well supplied so it really feels like life as normal," Mrs Harrison said.

"The town has a levy bank and the experts say the flooding won't really happen, so everyone is really just getting on with it.

"I guess the silver lining is we have been crying out for this rain for almost seven years during the drought and now we look like we will have a full soil profile for winter cropping."

The SES is urging motorists not to drive into the flood waters after reports some truckies and tourists had ignored the warnings in recent days.

Police are also investigating suspected damage to a SES helicopter on Saturday and Monday.

Around 9.30am on both mornings, golf balls were hit at a SES helicopter during takeoff from the football fields causing damage to the aircraft's exterior.

Anyone with information is being urged to contact Crime Stoppers on 1800 333 000.

The SES has been holding meetings with communities downstream of Mungindi - heading toward the Walgett area - in anticipation of floodwaters arriving there in the coming weeks.

Flood updates are available on the SES and Bureau of Meteorology websites.