In the fine-medium Merino and Poll Merino section of the 2021 Royal Sydney Show held in the Cox Pavilion, 33 entries were exhibited.

A graduate from the ram showing not more than four teeth class in the August-shorn section was awarded the grand championship for the fine-medium wool classification under judge Rodger Mathews, Borambil Merino stud, Corowa. 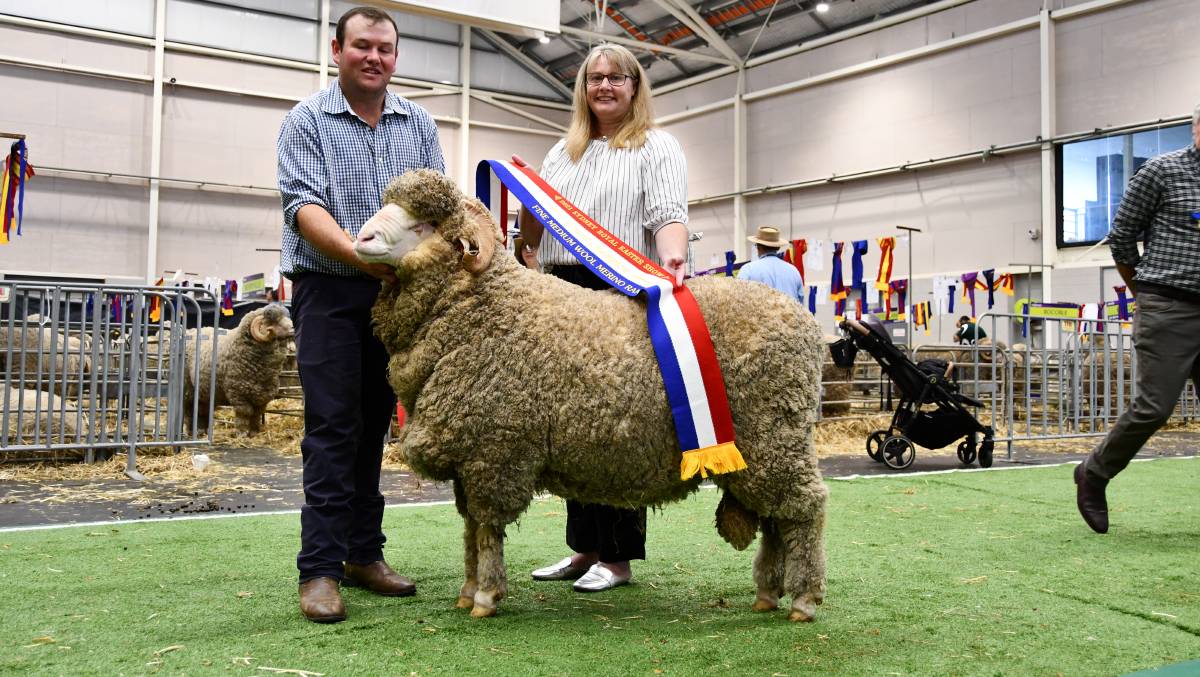 The young ram was exhibited by Garry Cox, Langdene, Dunedoo, while the reserve grand champion, winner of the two-teeth March-shorn class was exhibited by Anthony and Krisi Frost, Thalabah, Laggan.

"It was exciting to be able to judge sheep like these," Mr Mathews said when talking about the grand and reserve grand champion rams.

"The Langdene ram had a bit more purity of wool, and although the Thalabah ram was a magnificent sheep, the grand champion just had the edge.

"They are each something the industry can be proud of."

The grand champion had come through the two-teeth March-shorn class.

Mr Mathews complimented the breeders and noted the Thalabah-bred ewe was the 'complete package with a very good back end."

"Have a look at the way she is put together," he advised the spectators.

"She is feminine, well balanced and a very productive ewe."

In the Poll Merino fine-medium wool section, the ram grand championship was awarded to the four-teeth August-shorn ram shown by Wal and George Merriman, Merryville, Boorowa. "This ram has got an exceptionally long staple, with brightness and softness we want in our wool," judge Rodger Mathews explained.

"I liked the pure white lustrous wool and he is very sound structurally - a very smart ram.."

The reserve grand champion Poll ram was exhibited by Hamish and Jock McLaren, Nerstane, Woolbrook and had come through the two-teeth class.

"He was the only exhibit, but he is a very correct sheep, so square and good on his feet and carrying a lot of wool."

The Poll Merino ewe grand championship was awarded to the two-tooth ewe exhibited by the Nerstane stud over the reserve which had been paraded by Chris Clonan, Alfoxton stud, Armidale. Judge Rodger Mathews was very impressed with the quality of all exhibits in the fine-medium wool section but noted the productivity of the grand champion ewe..

"At this level it is exciting to see the phenomenal staple length and high quality wool," he said.

"She is not a big ewe, but is very productive."

Mr Mathews said the Alfoxton-bred ewe was also a very productive sheep with great breeding potential, but on the day she was beaten by a sheep with a high quality fleece.