Weaner cattle dominated the sale, with no cows offered. 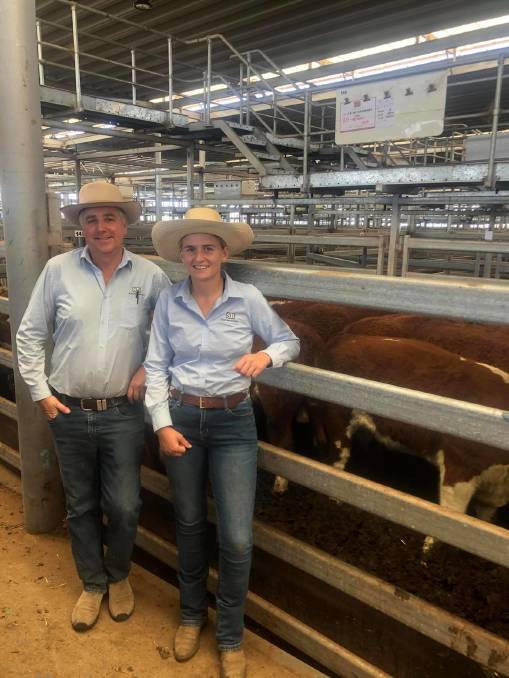 There were 1939 head of cattle offered at Wodonga on Thursday, selling in what was described as an "extremely buyout" market, with weaner steers making more than 748 cents a kilogram.

But interestingly nearly the whole yarding was made up of young cattle, with no cows and just one pregnancy-tested-in-calf heifer up for grabs.

Schubert Boers director Craig Schubert said the quality of the yarding was good but there wasn't a lot of weight in the offering, with some spring-drop calves starting to enter the market.

"People are starting to say at the money they can get for them now they might be better to sell rather than wean them and take them through the winter."

Meanwhile, the absence of cows was put down as an indication of the overall lack of females and producers' increased confidence in their breeding.

Mr Schubert said the market was one of the dearest he had seen with 250kg calves making close to $1700.

"We keep saying it can't get any dearer but then it does, it was very solid," he said.

In Corcoran Parker's store sale report agent Bo Helwig said that most Angus steers, 300kg plus, were selling for around 570c/kg.

Their agent, Corcoran Parker's Gordon Perkins said the heifers were all bought by local commission buyer Andrew Lowe and most of the steers went to a fellow Corcoran Parker agent for their clients.

Mr Helwig said the lead of the heifers, 350kg to 420kg, went directly to feed.

"It seems that the feeder market and those competing for feeders are looking for next week's induction," Mr Helwig said.

There was commission buyers operating for northern areas, along with bidders from the Upper Murray and Finley districts, but Mr Helwig estimated 70 to 80 per cent of the cattle stayed local.