The 145 kilogram ram was a standout in the interbreed.

A powerhouse Poll Dorset team from Tattykeel stud at Oberon couldn't be beaten in the meat and dual purpose sheep interbreed judging, claiming a clean sweep of all championship ribbons of the Sydney Royal Easter Show for the third year running.

A 12-month-old ram who was said to "own the show" caught everyone's eye from the moment his 145 kilogram frame stepped on the mat and subsequently went all the way to the supreme prime lamb exhibit award. 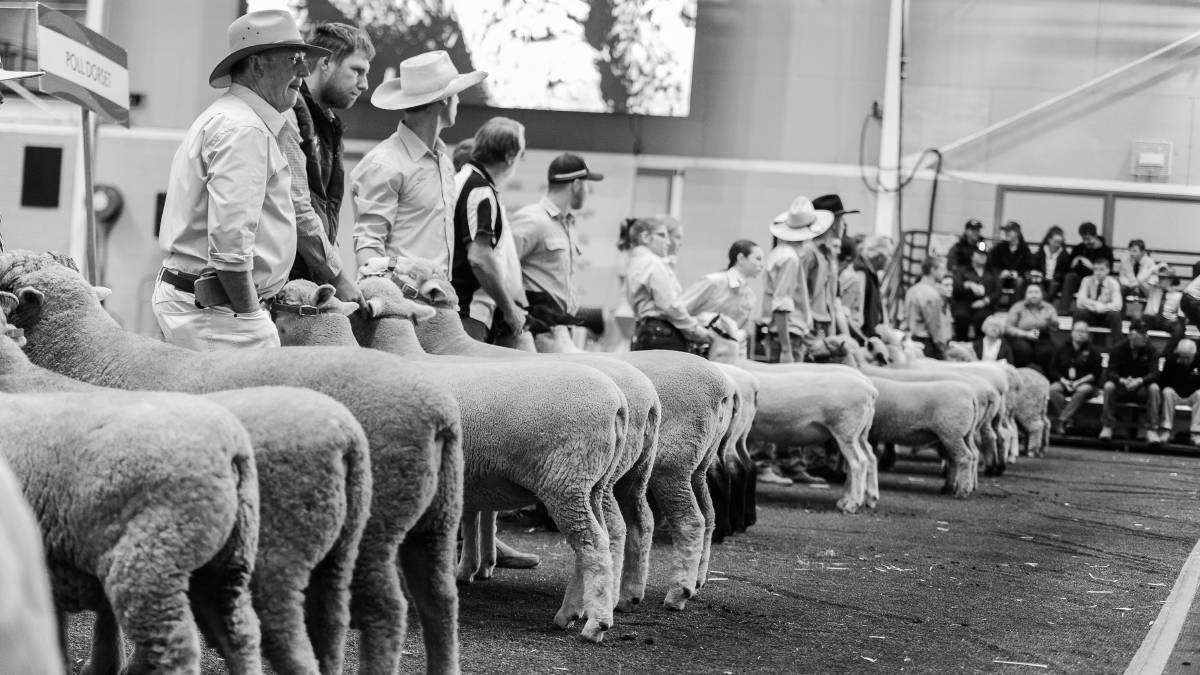 Named Masterclass, his growth for age and structural correctness was hard for any of the other breeds to beat.

Speaking on behalf of the judges, Marshall Douglas, Abelene Park Poll Dorset, Wooloomin said the ram's length of carcase, particularly from the loin, was what got him over their supreme ewe.

"I think when sheep grow as fast as this pair has you can see the development of these sheep at such a young age, their leg structure has to be impeccable to carry those weights at young ages," he said.

"These two have got that structure and I think particularly for the ram, it will hold him in good stead for a long life."

Also read: All the photos from on the mat

In the supreme ram judging he was able to overcome the runner-up Border Leicester from Wattle Farm Border Leicesters at Temora while the Southdown from Chandpara at Tylan in Victoria was in third.

Masterclass' mother was a supreme ewe in 2015 while his uncle was also supreme exhibit in 2018.

The embryo-bred lamb by Mastermind was used in the stud at nine months of age and had the fastest 50-day, 100-day, 200-day and 365-day weights ever recorded on the Tattykeel property.

"At six months of age he was 96 kilograms," Tattykeel's James Gilmore said.

"So there is rapid growth there but he is just so balanced and carries it. One of the judges commented they thought he had an extra rib or two...the length of the ram is pretty incredible."

Not since 2016 has a ewe overcome the ram for the supreme title, he said.

"She was an unbelievable ewe too and I don't know what it takes to beat the ram but she has come up against this bloke who is the type of ram you don't have every year," Mr Gilmore said.

"We would have loved to have had every Dorset breeder in the country here this year because you want competition, it makes you better."

Their Poll Dorset ewe who topped her interbreed class was a milk tooth, shorn female and was again the clear winner from all the judges.

The Border Leicester from Wattle Farm came in second with the Southdown from Chandpara and the Suffolk from Lindean stud at Bathurst equal third.

Judge Joanna Balcombe from Cranbrook Poll Dorset stud, Canowindra, said it was a fantastic line up of ewes that were a credit to all of the breeders.

"Personally, I think the ewes probably outshone the rams a little bit this year, but that is not taking anything away from the rams because they were also outstanding," she said.

The Peter Taylor Memorial Perpetual Trophy for one ram and two ewes was awarded to Tattykeel with the Hampshire Down team from Aurora Park, St Helens Plains, in second and Border Leicesters from North South at Young in third.

The J A and M Y Gilmore Perpetual Trophy for the best grand champion ram and ewe combination was also bound for Tattykeel with the Border Leicesters from Wattle Farm taking runner-up and the Southdowns from Chandpara in third.