All the results from the Jersey breed judging of the Sydney Royal Show. 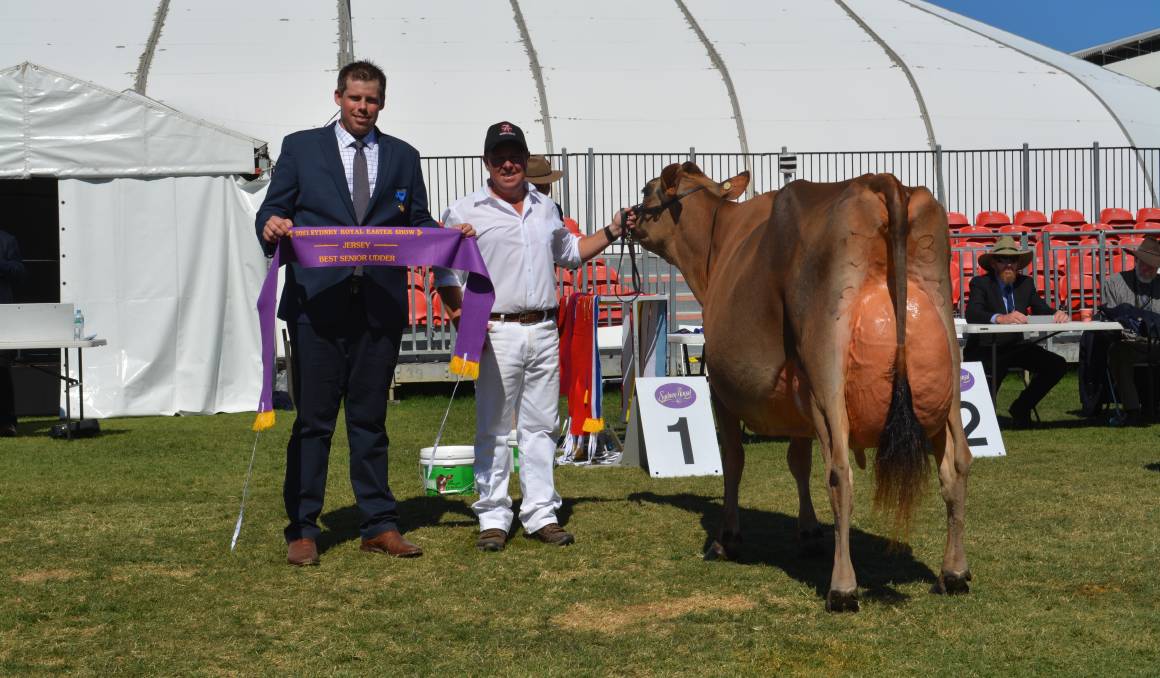 VICTORIAN Jersey entries were unstoppable at Sydney Royal, with all three major champion sashes being awarded to interstate entries.

Western Australia judge Lachlan Fry of Brunswick, WA cast his eye over the 55 quality in the Jersey breed for 2021, but it was one senior female, Windy Ways Galaxies Dawn 7, that Mr Fry couldn't stop raving about.

Exhibited by Windy Ways Jerseys and Cherrylock Cattle Co, Tallygaroopna, Vic, the six-year-old female has an extensive show history and to date has not been beaten.

"I love the beautiful openness of this female," Mr Fry said. "She is just so correct, and it is that depth and spring of rib and awesome mammary system, with amazing rear udder attachment that is high and wide that had her winning here."

Mr Gavenlock said she has one of the deeper cow family's in the country in her pedigree, and she is breeding well with the studs currently IVF flushing her.

"Brian Leslie traced her back to 1923, originally being back to New Zealand but been in Australia for 60 years or so," he said.

"We are actually taking some samples to potentially clone her one day too, we haven't gone done the process yet but we at least have the samples."

Four credible senior Jersey females featured in the championship lineup, a group of cows that Mr Fry said could stand up and compete anywhere around the country.

"You have to admire the length of body of this heifer, the openness, depth of rib and balance right the way through," Mr Fry said.

In judging the best udder class, Mr Fry said she is the most correct in her udder and shows texture, length of fore attachment, height and width of rear udder.

"She is a cow that displays a beautiful mammary system, she is dairy, clean boned and I think suit what we are looking for and trying to achieve in the breed," he said.

The Wilson family of Shirlinn Jerseys, Tamworth had a successful show, exhibiting four of the major awards.

The Jersey breed went on to win all sections of the interbreed dairy competition.

Sponsored by
December 5 was GrainCorp's busiest day of harvest with more than 400,000 tonnes arriving at its receivals.
Test
Seed research and gene technology at heart of Wagga Wagga Agricultural Institute's funding injection.
Test
The border will reopen earlier than anticipated.
Test
The sex pregnancy offering consisted of recipient females implanted with embryos that were pregnancy-tested-in-calf (PTIC) with the foetus sexed.
Test
GrainCorp is on the hunt for more workers, particularly in the south, as the wild November weather takes its toll on staff movements.
Test
Dairy farmers around Australia have welcomed an increase in home-brand milk prices by major supermarkets but have warned it should be shared with farmers.
Test
Broken Hill City Council mayor to take on LGNSW's top job.
Test
Monday's update included 208 new cases, with the daily total outstripping the number in hospital across NSW.
Test