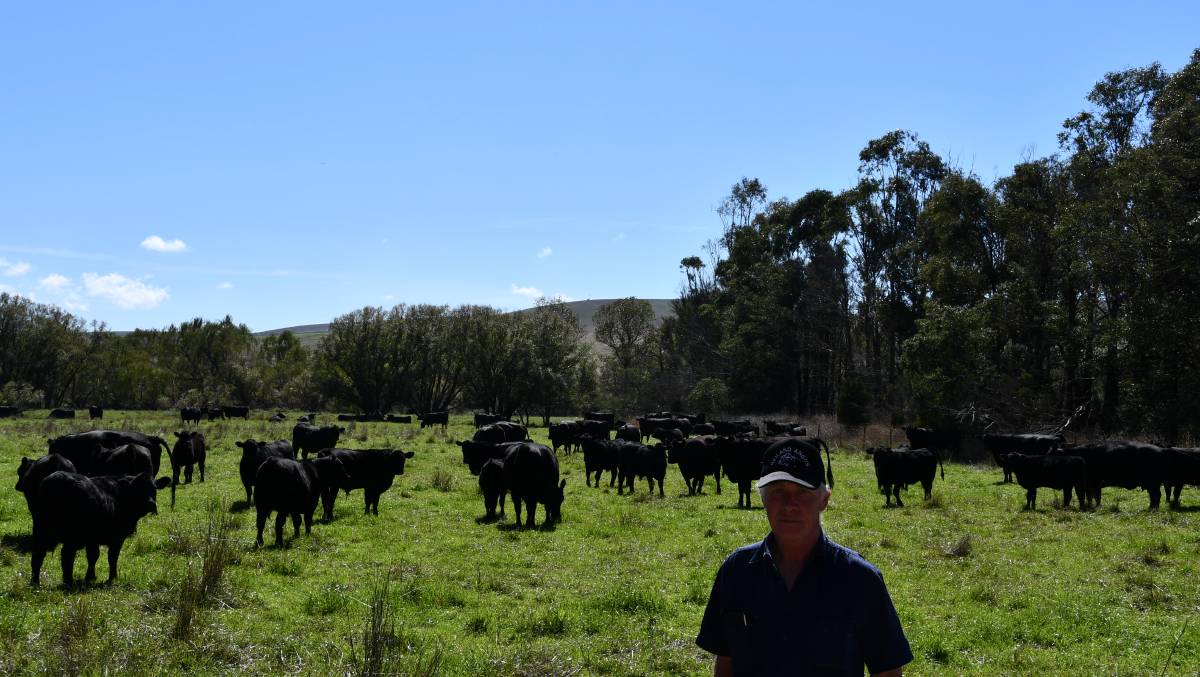 Ken Cobban with the mixed-age Reiland-blood Angus cows at Merrilla, Goulburn and their spring-drop calves soon to be weaned.

A recent draft of grass-fed milk and two-tooth Angus bullocks grown out on Merrilla, Goulburn, owned by Coolong Pastoral Co dressed at average weight of 380kg after weighing 730kg live weight to return $2560.

The carcase feedback provided to the manager of Merrilla indicated 65pc of the bodies had an average fat depth of 17mm and 27pc had a marble score of five.

"They are tremendous results and reflecting the quality of the bulls we are buying," Ken Cobban said.

Mr Cobban, property manager of Merrilla since it was purchased by the late Anthony Crichton-Brown nearly six years ago said the Angus are a good easy breed which 'does the job for us'.

"Anthony loved the Angus and he had been buying bulls from the Reiland stud at Gundagai for the past 25 years," Mr Cobban said.

"They are a breed which is in great demand, giving a premium price and we are getting good weight gain on grass from using the Reiland bulls."

Mr Cobban noted 100 cows are run on the 400ha property just west of Goulburn and associated with the herd of 400 breeding females on the company property, Toronga Station, Hay.

The intensity of the Merrilla operation fits neatly with Mr Cobban's background as a dairy farmer near Stirling in Scotland before he emigrated to Australia and secured a dairy farm management near Nowra.

"Having been a dairy farmer I have an appreciation of high stocking rates on good pastures," he explained.

"I like to have quite cattle and of course the cows must perform - no calf on the ground means they are out the gate.

"I also understand the value of having good pastures and making sure I have stock which will utilize it.

"We have had periods when our steers have been putting on 1.8kg per day of phalaris, ryegrass and clover pastures."

Mr Cobban noted he adds a bit of rough pasture to the cattle diet and understands the 'scratching' effect on the gut aids in the better utilization of the improved pastures.

"I think it is good to have some rough feed as a supplement," he said.

"We run our stock here on pasture but we will feed hay, which is bought in, to the cows during winter if it is cold and there isn't a lot of feed.

"They can stand the cold weather if they have a full belly."

Mr Cobban considers a range of options for the sale of his steers, and as previously indicated taking them through to heavy bullocks has been the most recent.

"But we keep an eye on the market and do what is right for the business," he said.

"We have a good relationship with Wingham Beef Exports."

Grazing management revolves around running the cattle in large mobs and moving them according to the amount of ground cover left behind.

"Set stocking can be good, but the cattle do tend to eat out the best plants and leave those less palatable.

"With heavy stocking for a short time the cattle have to eat everything, and moving them around gives the pastures the chance to recover." Spring 2020-drop heifer and steer on Merrilla at begining of April 2021.

Sire selection is critical for any cattle business and Ken Cobban, manager of Merrilla, Goulburn for the Coolong Pastoral Co, focuses on the top 20 percent of the catalogue for Breedplan EBV's when he attends the annual Reiland Angus sale at Gundagai.

"I select for moderate birthweight and a well-balanced bull with good temperament," he said.

"My aim is buy the quality we want and although we pay a bit more for the bull at the end of the day you do get it all back."

At Merrilla, heifers are joined at 320kg liveweight for seven weeks while the cows are joined for nine weeks.

"Last year we yard weaned our August-September 2019 drop heifers in February and they averaged 280kg liveweight, while the steers weighed 312kg." he said.