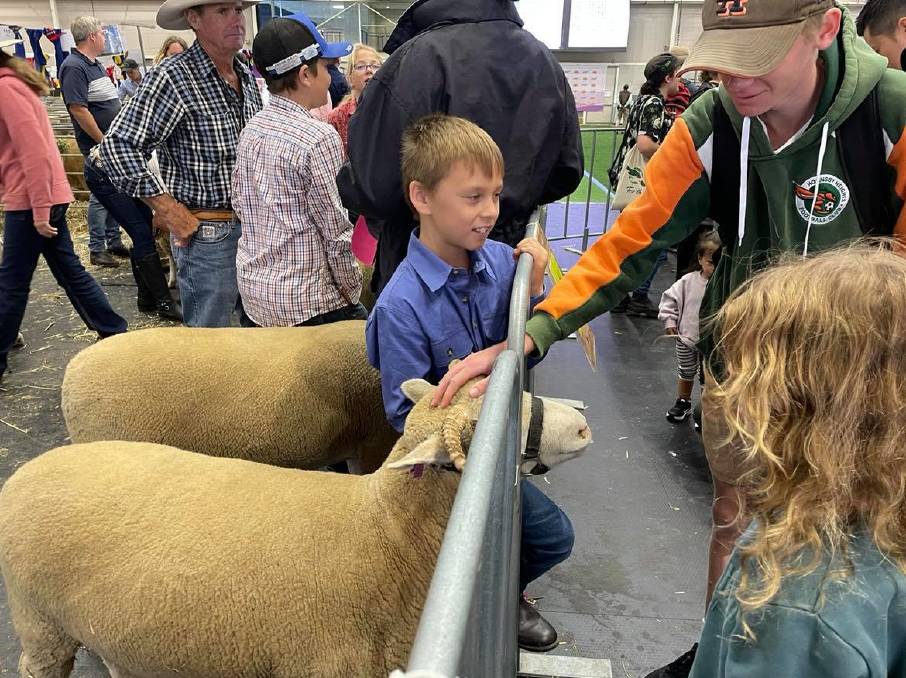 Dyllan, 11, from Coonabarabran showing off a Dorset Horn ram to spectators at the show - helping to bridge the divide between the livestock industry and the public.

There is one time of year where the city and country converge, it's the Sydney Easter Show.

There is one time of year when the country descends on the city with cattle, sheep and big hats in tow.

It's the Sydney Royal Easter Show, an event that displays rural Australia to hordes of city-folk and for some Sydneysiders it is their only chance of seeing the livestock industry face-to-face and not on a harrowing news story or in a click-bait Facebook post.

In the world where the importance of social-licence is ever increasing, the Sydney Show, with its close to 700,000 visitors, could be one of the best tools the livestock industry has of promoting the best of the business.

A 2018 report 'Australia's Shifting Mindset on Farm Animal Welfare', commissioned by the federal Department of Agriculture and Water Resources, found 95 per cent of Australians view farm animal welfare to be a concern and 91pc want at least some reform to address this.

The results were a reflection of 1521 respondents.

But, it can be hard to align those figures with the pure joy displayed on spectators faces when seeing an animal paraded at the show.

For some Sydneysiders the Sydney Royal Easter Show is their one chance to come face-to-face with the livestock industry. Photo: Lucy Kinbacher

During my time at the show there was a constant bevy of onlookers watching the judging and after we overheard some interesting comments from the public, including a women pointing to beef cattle and telling her kids, "Look, this is where your milk comes from", I took to the crowd to ask them what they knew and thought about the livestock industry.

Sunny from Western Sydney was showing his son farm animals for the first time.

When asked if he had concerns about the livestock industry he said he was worried by the quality of the food fed to the animals and hoped they were not "full of steroids".

But despite his concerns they had been planning a farm animal themed birthday party for their son.

Like many people I spoke to, Sunny said he was interested in learning more about where his food came from, "especially with most of the country reliant on agriculture".

"You don't hear about it until there's a devastation"

I think the conversation summed some of the conflicting viewpoints the public has when it comes to the livestock industry.

It seems there is a tension between animal welfare concerns, often formed without the needed context or understanding, and the sentimental view many people in the city have of farm life and agriculture's importance, not only to Australia's economy, but also to its identity.

Of the people I spoke to, anyone who had a connection with rural Australia, no matter how tenuous, generally had a positive view of the livestock industry, while those who had concerns said they got nearly all of their information from the mainstream media - where as Sunny put it, "You don't hear about it until there's a devastation".

So how do we start to get the good news stories from industry into the general public's consciousness?

It's a question that's been asked for years and I don't have the answers, but in the sheep shed I saw someone who knew where to start.

His name was Dyllan, he was 11, and from St Lawrence's Catholic Primary School in Coonabarabran.

Through the fence that divides the general public with the exhibitors, I watched Dyllan showing a Dorset Horn ram to continuous groups of children and their parents.

The Dorset Horn was poking his nose through the fence so the kids could pat him, while Dyllan patiently explained to every new group some facts about sheep - for example, "Did you know their horns are made from the same thing as your fingernails?"

And I wondered if next time there is a news story about the worst of the livestock industry, those kids and their parents might remember one of the best - a boy and his sheep poking through the fence, trying to bridge the divide.