Timber NSW representing small sawmillers has backed away from a push to exclude forestry from contentious environment rules and instead has suggested changes that protect forest industries from "lawfare" legal action when they an prove they are abiding by correct standards. 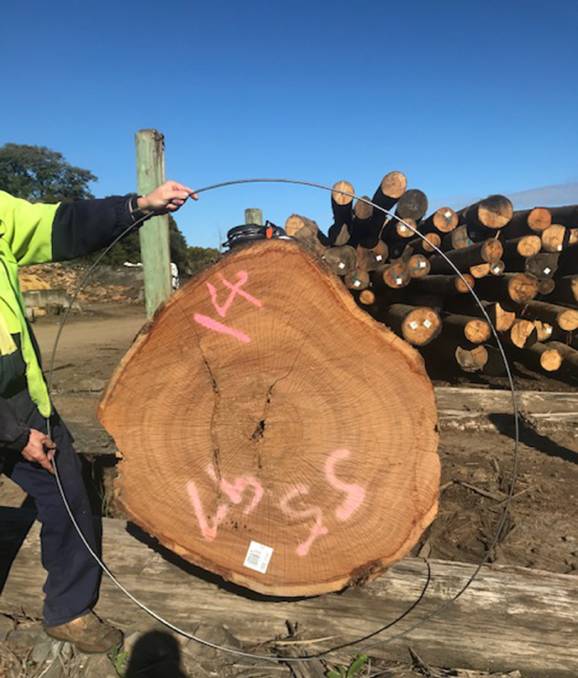 Standards, like those describing the maximum diametre of a sawlog, need to be written into law to avoid protests ending up in court, argues Timber NSW. In this case international standards dictate measurement at breast height whereas in NSW the EPA demands measurement at ground level making this log oversized and illegal.

Timber NSW, representing small sawmillers, has backed away from a push to exclude forestry from federal environment rules and instead has suggested changes to protect forestry workers from "lawfare" legal action where they can prove logging is abiding by correct standards.

A private member's bill put forward by Nationals senator Bridgette McKenzie to make native forestry operations exempt from the Environment Protection and Biodiversity Conservation Act was prompted by last year's court action against VicForests by the Friends of Leadbeater's Possum - represented by Environmental Justice Australia - which found the state agency did not comply with precautionary principle laws in parts of central highlands where threatened greater gliders lived.

As a result of that court outcome Bunnings in Victoria refused to sell timber product from Victorian state forests while continuing to market rainforest hardwood from south east Asia. VicForests is currently appealing the outcome because the legal precedent has opened another way for determined third party activist groups to shut down all native forest logging on Crown Lands. Their current prowess in the court room has been labelled "lawfare" by those on its receiving end.

Timber NSW backed away from the contentious amendment saying there is no public appetite for removing environmental protections from forests industries.

Instead they have suggested to government that they insert standards into the EPBC act and Regional Forest Agreements and to exercise judgement so contractors can continue to do their work, provided they obey the letter of the law. "These areas are not black and white," said solicitor Stuart Coppock.

Timber NSW presented their submission at the Senate Standing Committee on Environment and Communications in Canberra last week.

Re-imagine a future in beef