Fog lifted in time to view the Merino ewes at Peak View.

Clear skies greeted participants in the 91st Berridale Merino ewe competition after a heavy foggy morning across the Monaro.

Clear skies greeted participants in the 91st Berridale Merino ewe competition after a heavy foggy morning across the Monaro. 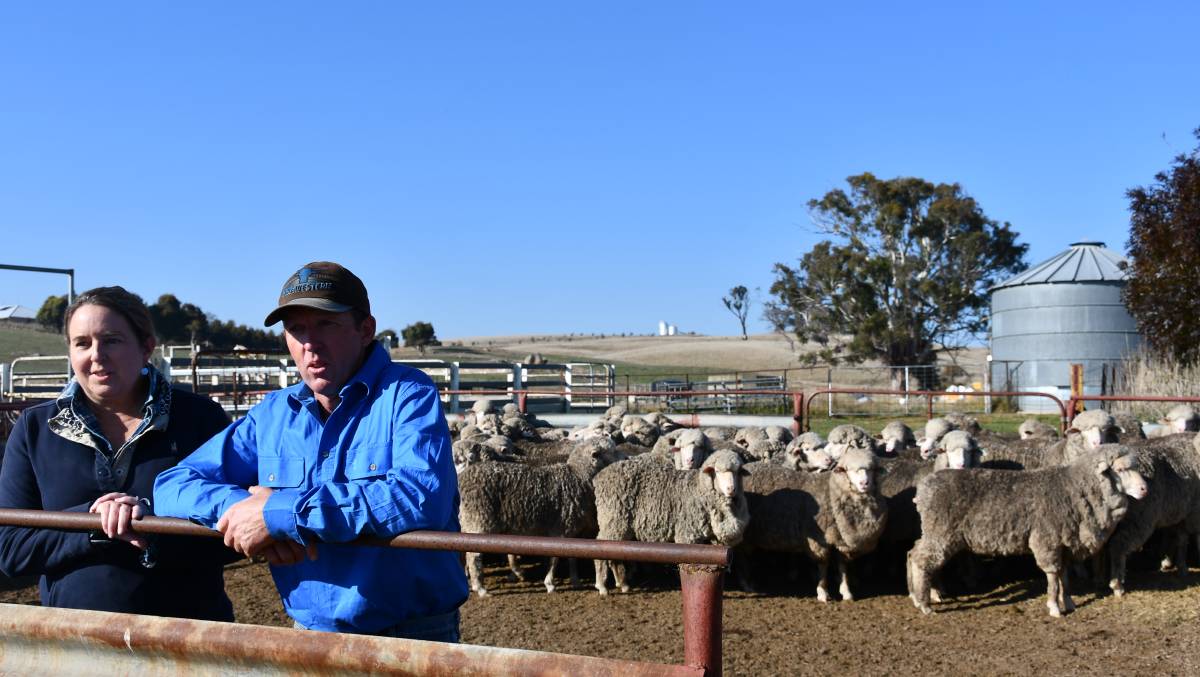 Comments around the sheep yards were wide and varied but most focused on the woolgrowers ambition to breed Merino ewes to survive the often harsh Monaro environment, grow a productive fleece and have an acceptable lamb marking percentage.

"They do look a picture and you are obviously very proud," Mr Cox said.

To which Mr Crowe immediately replied - "I am.".

"You ought to be because we are very impressed with them," Mr Cox said.

"You've got a great surface on them, a great tip on them and its through the whole lot.

"You just don't have a few good ones at the front and it tapers off down the back."

Mr Cox further pointed out the soft, well-crimped and bright wool so even across the mob really stood out.

"At every ewe comp people say you could take a few more out at classiing and I know you classed at 26pc, but I think if you could squeeze another couple of percent out," he said.

"There are three or four heavy ones in the back pen which if they came out the mob would be improved."

Mr Crowe acknowledged the comment and said he knew the ewes to which Mr Cox was referring.

"But I'm trying to build flock numbers after the previous years of drought," he said.

David Zouch endorsed Mr Cox's comments on the high standard of the flock and complimented Mr Crowe on his breeding achievement.

"They are a credit to you Raymond, they are a beautiful line of top ewes and the direction you are going in is where everybody would like to have them," Mr Zouch said.

"They are very heavy cutting, square long-bodied sheep with good topknots and they are pretty even, so keep doing what you are doing."

A question from the crowd about what is the ideal classing percentage drew the following response from Mr Cox which led to some discussion around the sheep yard.

"It is difficult to out an exact figure but it does depend on how good your flock is for a start and how your flock numbers are," he said.

"Most people are always battling numbers and trying to build their flock up, and Raymond is trying to build his flock up hence he didn't go quite as heavy as he could have.

"But on the law of averages people work on that 30pc as a reasonable culling rate."

But if Mr Crowe is intend on building his flock numbers and lift the productive standard, what is the point in retaining those 'off-type' ewes, which could breed more 'off-type' ewes?

"I guess when you do get enough numbers you could cull a lot heavier," Mr Cox said.

"By leaving them in is a lot more economical in going out to buy replacements.

"Of course you can join those ewes to a terminal sire and still get a return."

Mr Zouch thought sometimes when woolgrowers are rebuilding, they have to accept some ewes in their flock are off-type.

"But when you have got your numbers then you can cull a lot heavier," he said.

Ross Walters asked each judge, if it would be sensible to correctively mate the ewes joining specially selected rams to counter the faults of the off-type ewes.

Mr Cox replied that some people do.

"But it complicates things a lot and I try to encourage the flock breeders to leave it to the stud breeders," he said.

"Most commercial breeders like to put a selection of rams with the ewes but if you really want to get down to the nitty-gritty and you want to make some rapid gain, pull out those few heavier ewes and put them to a plainer ram."

Mr Crowe pointed out he is pleased with the productivity of his flock, noting that the lambing percentage has lifted from around 75-80pc and during the last two years he has achieved 100pc across the flock.

He has been buying replacement rams from the top end of the catalogue during the Cottage Park ram sale and they are joined to his maiden ewes.

"They are getting the latest model," Mr Crowe said.

To which David Zouch added - "when you get them to where you want them, don't stop because they can go downhill just as quick."

"It is hard to maintain that high standard, you have to keep working on them."

When Mr Zouch was asked why do Merinos revert so quickly he thought people start to rest on their laurels and lose concentration.

"You start putting the wrong rams with the wrong ewes and it will go backwards quickly," he said.

"If you are doing the right thing all the time, and perhaps don't even realise you are doing it they will stay at that high level.

"But if start to get carried away and buy cheaper rams because you think I'm there, that is when you can go wrong."