Political hopeful Alex Rubin with his doting mum Pauline on her property east of Tenterfield.

Alex Rubin has racked up some incredible experiences in his Defence Force career.

For a long time the counseller's calm demeanour has helped youngsters with their issues, ably aided by Rosie the pooch.

That propensity for calm, clear thinking in the face of adversity must run deep in the Rubin family, with son Alex playing a leading role in a number of recent crises in his logistics role with the Australian Defence Force.

He may now need to call on those skills as he throws his hat into the rough-and-tumble world of politics, going up against incumbent Barnaby Joyce for National Party pre-selection in Armidale this Saturday to represent the New England electorate.

The career soldier played a major role in extracting the 12 young boys and their assistant coach from the flooded Thai cave back in 2018, heading up logistics for the Australian team and acting as the main interpreter for relaying instructions from the Thai Army controlling the operation to the teams of hundreds of contributing countries.

Then when PM Scott Morrison called in the Australian Army to help with the bushfires in early 2020 it was Alex who managed the deployment of ADF resources.

And his mum's pride in his achievements is boundless.

"I'm so proud he's achieved something I probably wouldn't be able to," she said.

Pauline said his choice of career came as no surprise. She spent seven years in the army as a nurse and all three of her children took up defence force careers.

"They must have wanted boundaries," she laughed.

He has spent 25 years in the military, entering after working as a farm hand and labourer. Now with the rank of major he expects a new assignment every two years. 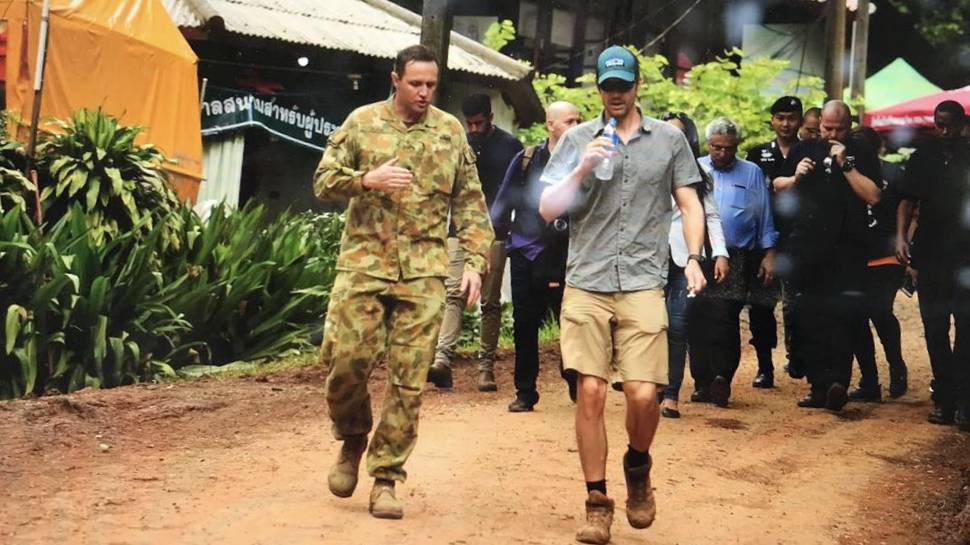 He said his career has taken him the long way around back to the New England region, via diplomatic circles and undertaking a lot of humanitarian aid and disaster relief work along the way.

He graduated from fixing helicopters to flying them after being selected for officer training, but feels it's his experience dealing with a wide range of scenarios that has set him up for politics.

"The Infantry is not just about fighting," he said, although that skill may come in handy as well.

"You're almost a diplomat in terms of everyone you meet, whether it's riot response in the Solomon Islands or unrest in East Timor, or even dealing with the Army/Airforce interface.

"Everywhere you engage, you're essentially being a diplomat."

Alex embraced the opportunity to study languages and said it's the best thing that ever happened to him. He learned Hebrew and Thai and was posted to the Australian Embassy in Thailand, where he met his now-wife.

He's also undertaken assignments in Afghanistan, Lebanon and Israel and was part of a UN mission to Syria, and that changed his perception of the world.

"I saw a lot of hardship, and realised how lucky our country is."

He then spent two years as Australia's representative embedded in the Royal Thai Army. He was back in Australia when he received the call at 4pm one afternoon in June 2018 asking him to deploy at 5am the next morning to the unfolding Thai cave crisis.

He was the Defence Force lead, working with representatives of the Department of Foreign Affairs and Trade and the Australian Federal Police as part of Team Australia.

He was the sole linguist and already knew some of the Thai army personnel.

"There were thousands of people trying to help," he said.

"It was a matter of harnessing all that goodwill."

Here his language skills really came into play. As planning officer he became the information conduit for all the international groups, interpreting orders from the Thai rescue commander.

For the best part of a month he practically lived inside the mouth of the cave, monitoring water level trends, undertaking risk assessments, and managing the responsibilities of the Australian divers.

"It was amazing to see the amount of international cooperation without agenda," he said.

"It was all about just saving the kids. There was enormous goodwill, despite different ideas and cultural differences."

Alex had a direct line to the Australian Embassy, and requests like a pumping system and highly specialised diving equipment were met within 24 hours. When it broke or became inoperable, another replacement was always close behind it.

Local farmers readily donated hundreds of acres of their land to the operation to be flooded in the rescue attempt.

Risk assessments at the time anticipated losses of up to 30 per cent of the young lives.

Three options were considered: drill a 400 metre hole through rock to reach those trapped, but the ground was found to be too unstable; pumping in oxygen and for divers to bring in food to allow the boys to wait for 2-3 months, while diverting water flows and pumping; and pulling the boys out through the flooded tunnels.

"The last was deemed the riskiest and potentially had a high failure rate, but ultimately was considered the best of a high risk of options."

With the death of one of the Thai Navy Seal divers, the operation stopped.

"This was a wake-up call, we realised that safety standards need to be re-checked," Alex said. 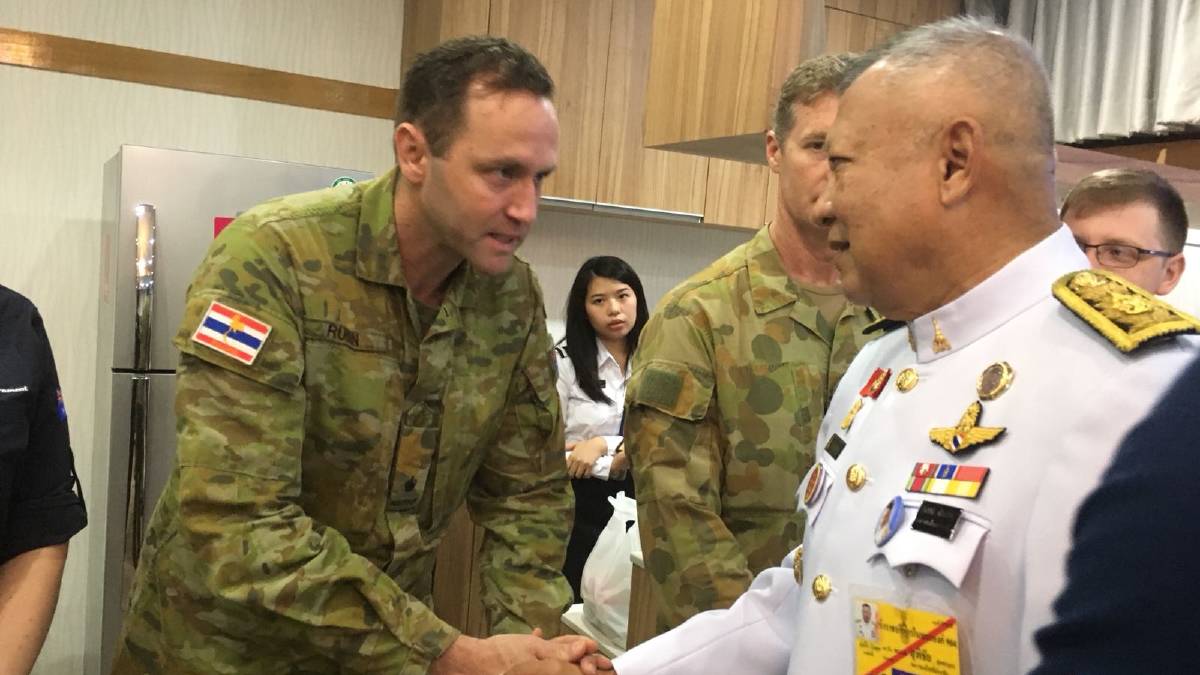 A senior official representing the King of Thailand thanks Major Rubin and the rest of the Australian Team at the airport before they depart.

Logistics then became the biggest challenge, with hundreds of oxygen tanks having to be distributed along the route, and clearly tagged to show whether they were full or empty. This was particularly difficult given the language barriers and different cultures, so a colour coding system was employed.

An area the size of a football field was set up with ropes to mimic the tunnels, and rehearse the rescue process for up to 700 people working inside the cave system.

Up to 1.5 kilometres into the cave, divers needed six hours of oxygen to traverse the length of the route. Alex said 80 trips were undertaken just to position tanks along the tunnels.

"Two hundred tonnes of air tanks were carried in, manually."

It took four days to get the children out, all alive. The fittest children went first and morale lifted with each success.

Alex said it's little known that just as the last child was pulled out, the pumps failed.

"The last boy was a high-risk extraction and we feared that he might not make it.

"His face was so small even the special mask wouldn't seal. They ended up wrapping duct tape around his head to create an airtight seal."

After the boy's rescue it took another 2.5 hours to evacuate the 700 workers. Tonnes of equipment were left behind in the cave.

Once he emerged after working 18 hour days, Alex said he came to realise how much of the world's attention was on the rescue.

A Royal Thai honour Most Admirable Order of Direkgunabhorn, equivalent to the Order of the British Empire (OBE), was bestowed on him by the King of Thailand.

"I just supported the heroes to get their job done," Alex said humbly.

"It was the international effort that swept me up."

Back on home turf, for the first weeks of 2020 he was part of the ADF deployment to fight the savage bushfires down south, identifying what ADF manpower and capabilities were needed, coordinating background supplies and liaising with NSW and Victorian Fire Services.

Now considering retirement from the ADF, Alex is looking at pursuing a second career in politics with the National Party.