Brad McLennan, Kangaroo Creek, with Brangus steers by Bizzy and Weona Brahman bulls that averaged $1407 at Grafton on Thursday, with Ken Woodward, Ulmarra.

Coastal cattle sold at Grafton on Thursday reflected the impact of March floods and a wet April and their cheaper price played into the hands of keen western buyers.

Store cattle that lost their bloom after autumn floods presented an opportunity for western buyers at Grafton's special weaner sale on Thursday, with 2706 head yarded. Weaner steers sold to a top of $1840 and heifers to $1632.

Buyers took calves as far west as Narrabri, with plenty going to Inverell, some to Tamworth and the majority to the New England Tablelands, particularly Glen Innes and Guyra.

Champion Charolais over Angus steers from Darrin Marshall, Bucca, reached a top of $1834 for 356.8kg at 500c/kg. Angus steers from the same operation sold to $1798 for 332kg at 538c/kg going for backgrounding at Ebor.

McGrath Cattle Co, Cangai, sold Angus steers for $1467 at 612c/kg going to Russell Connor, Cowper who commented: "I never dreamt I'd ever pay that much for steers and be profitable. I don't think it's sustainable but what do you do?"

Santa infused steers from Warren and Sharon Donoghue, Jackadgery, made $1594 for 311.3kg at 512c/kg going to Paul Tarrant, Southgate, who plans to grow them out for the next two years, after selling Charolais cross steers, 310kg, for 498c/kg or $1544 going to the Inverell district.

The top bid for heifers brought 658.2c/kg with the best price going to Angus produced by Darrin Marshall, 362kg for 450c/kg going to the northern Tablelands through Colin Say and Co, Glen Innes.

Agent Nathan Purvis said there was buyer appeal on the day with Clarence calves presenting at a lower weight and without the bloom of their cousins up on top of the range. "It made the cost more affordable," he said.

Champion whiteface heifers, Charolais over Brahman/Hereford, from the Moorhead family, Baryulgil, sold to a top of $1494 for 306kg at 488c/kg going to the Inverell district through CL Squires. Hereford heifers from the same property, Baryulgil Pastoral, made $1421 for 252.8kg at 562c/kg going to Coonamble through AJF Brien.

Champion Euro infused heifers from the Chapman family, Fineflower, Wakefield Charolais over Brahman/Hereford, sold to a top of $1383 for 232kg at 550c/kg going to the Glen Innes district.

Champion British heifers, Angus, from the Golding family at Coaldale, made $1361 for 247.5kg at 500c/kg going to Paul Gorrie, Figtee, at Dungarubba on the mid Richmond.

Champion Brahman infused heifers were Brangus with Bizzy blood, produced by the Martin family's Andilly Pastoral, Tullymorgan, which sold to a top of $1317 for 263.3kg at 500c/kg. "There was eight to ten foot of water through the place after the March flood, said Michael Martin.

Charolais cross heifers with Wakefield blood from Micah and Tanya Middelbosch, Nymboida, made $1465 for 285kg at 514c/kg going to John Gorrie senior, Koolkhan.

The Grafton sale was hosted by Ray Donovan Agencies with Farrell and McCrohan. 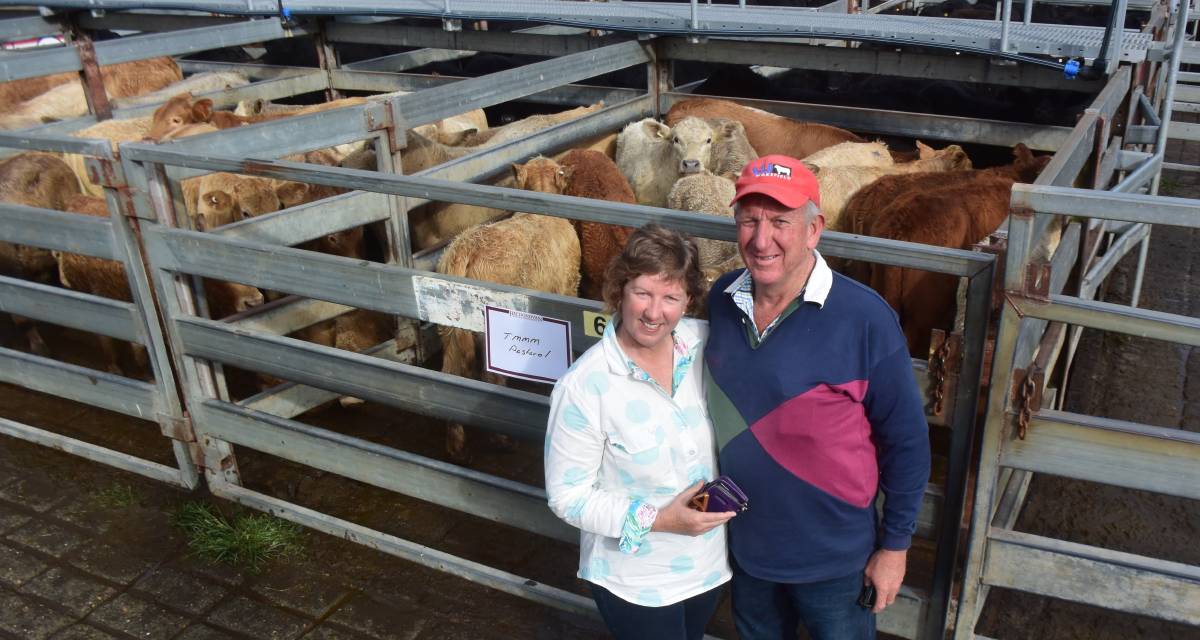 Jenny and Greg Frizell, Wakefield Charolais at Wollomombi, pictured in front of Charolais cross Brahman/Hereford sired by their bulls and produced by Micah and Tanya Middelbosch, TMMM Pastoral, off Nymboida country.