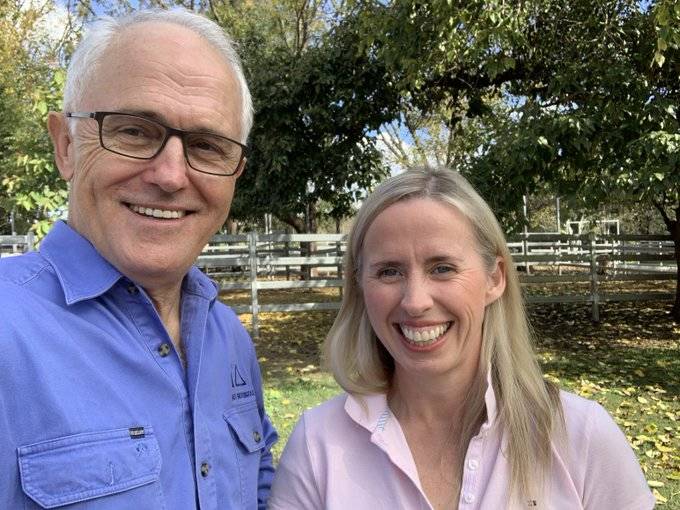 Former PM Malcolm Turnbull is backing independent Kirsty O'Connell in the race for the seat of Upper Hunter.

Independent gets Turnbull's nod in by-election

Mr Barilaro called Mr Turnbull a "disgrace" after he swung his supoort behind Kirsty O'Connell, as she supported an end to expansion of coal mines in the area to protect prime agricultural land.

Both Ms O'Connell and Mr Turnbull own grazing land in the Upper Hunter.

In a tweet on the weekend, Mr Turnbull said: "Great to be in Aberdeen supporting Kirsty O'Connell,".

"She [Kirsty O'Connell] won't sell-out the health of the community in the way the National party has done, in the way they've cuddled up to the big mining companies with no regard to what the people need here," Mr Turnbull said.

Mr Turnbull has previously fought expansion of mines near his property.

His statement sent the NSW Nationals leader into another spin, Mr Barilaro telling the ABC saying "It is one thing to lecture regional communities from the comforts of his Point Piper mansion, but to parade himself across the Upper Hunter and actively campaign against the livelihoods of thousands of people...he is an absolute disgrace," Mr Barilaro said.

"He actively destroyed the Morrison government's majority in the Wentworth by-election and now he is actively campaigning to destroy the Berejiklian-Barilaro Government."

Ms O'Connell, who has won the top spot on the by-election ballot paper, said the region was at a "tipping point".

"With such significant changes happening globally, we can't afford to wait another decade to develop a comprehensive plan for our future."

Mr Barilaro called on Mr Turnbull to resign when Mr Turnbull was Prime Minister in 2017. He told the Alan Jones that Mr Turnbull was "the problem" and was "out of touch" as polls showed his government was headed for defeat in the federal election.

"Prime Minister is the problem," Mr Barilaro said. "He should step down, allow for a clean out of what the leadership looks like federally. My view is Turnbull should give Australians a Christmas gift and go before Christmas."

Now Mr Turnbull has angered Mr Barilaro. This time though the future of the NSW Coaliiton is at stake as the Berejiklian-Barilaro government depends on winning the Upper Hunter to stay in majority goverment. The by-election was forced after former Nats member Michael Johnsen resigned in disgrace over an alleged sexual assault of an adult worker. Mr Johnsen has denied the assault.

Meantime, the NSW Nationals announced Federal Leader and Deputy Prime Minister Michael McCormack has been pre-selected again to be The Nationals' candidate for Riverina.

Mr McCormack was chosen to be The Nationals' representative at the party's pre-selection meeting on Sunday 9 May 2021 at Cowra.

"Michael is doing a wonderful job as the Member for Riverina and Deputy Prime Minister and I am proud to have him endorsed as our candidate," Mr Hyams said.

"He has been a strong voice for the Riverina electorate and, more broadly, rural and regional communities across Australia."