Wellington-based dry stone waller, Emma Knowles at one of her "Stone of Arc" walls at her Glenrock training Centre.

Life wasn't fulfilling for Emma Knowles until she escaped the city concrete jungle and found air and a new career in dry stone walling.

Celebrated dry stone constructions around the world include the 5000-year-old Skara Brae Neolithic village in the Orkney Islands, the 4000-year-old pyramids in Egypt and 2000-year-old Incan temples of Peru.

But in Australia, Aboriginal people used dry stone techniques to construct elaborate structures like the Ngunnhu (fish traps) at Brewarrina some 40,000 years ago.

Dry stone walling is an ancient building technique where stones are held together indefinitely by gravity and friction, not mortar and almost any kind of structure can be built using the technique, according to Wellington-based trainer, Emma Knowles. 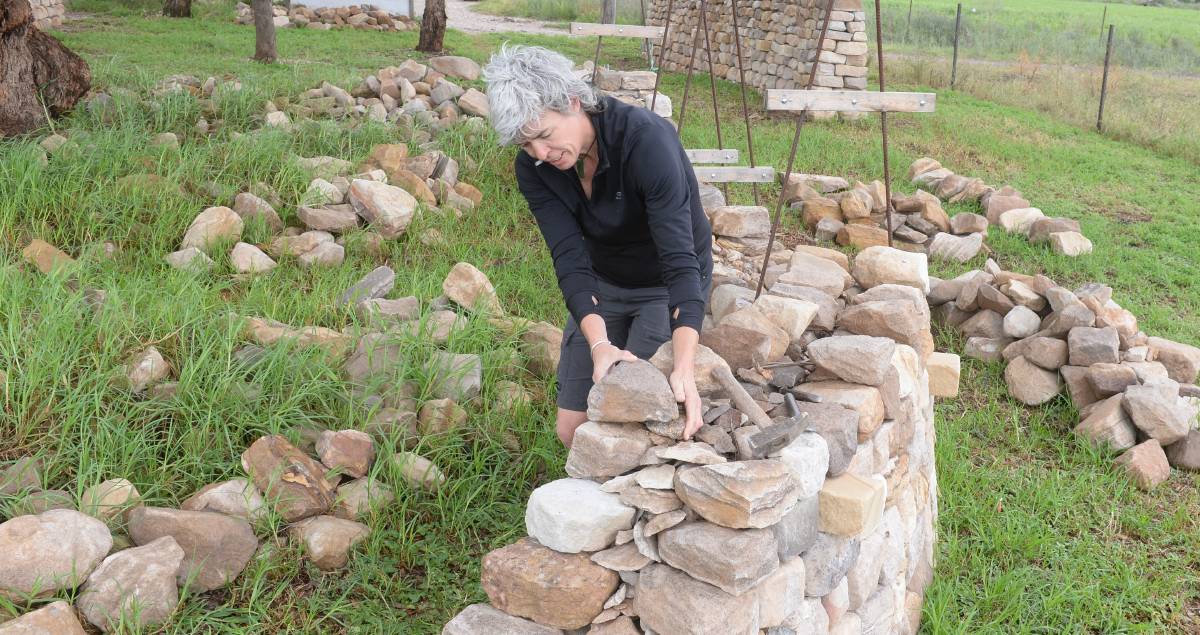 It's a craft many thousands of years old. Dry stone walls will outlive any manufactured construction. Look at Stonehenge or the Pyramids.

"A well-built dry stone structure can outlive anything mortared by several millennia," she said. "They rarely require maintenance, grow stronger with time and evolve with their environment rather than fighting against it."

The use of mortar is a much quicker option for building, but the rigid nature of mortared constructions mean they succumb to environmental pressures and begin to deteriorate from the outset.

The Ngunnhu at Brewarrina, is one of the oldest and least recognised human-built structures in the world.

Ms Knowles said until recently, anyone wishing to learn the craft beyond an introductory workshop, had to travel to the United Kingdom, North America, France or Italy.

However, Wellington has recently become the location for the Southern Hemisphere's only professionally recognised dry stone training facility to incorporate all the elements required to teach the traditional craft from hobbyist to expert.

The training center was established in 2017 by Emma, an Advanced level waller and instructor, originally from Yorkshire. England.

She migrated to Australia in 2009 and had a successful career managing mental health services in Sydney and Melbourne. In 2015 she opted for a "tree change" and headed for the country in search of practical outdoor work. On her travels, Emma called into Wellington to visit friends and take up some farm work.

"One employer, on account of my accent, asked if I could build dry stone walls," she said. "I couldn't, but a few months later, on an extended trip to the UK, I attended several courses. The experience was love at first sight, creating natural structures from natural materials in natural surroundings.

"I learned from the experts, immersed myself in the history and traditions of the art, qualified as a professional waller and the rest is history."

In 2017 Emma established her business, Stone of Arc, focusing on design, construction and training. A year later she gained an International Specialised Skills Fellowship, allowing her to undertake further training and research overseas. During this time, she became one of only six female Advanced dry stone wallers in the world, and the only one of any gender in Australia.

"The fellowship gave me the opportunity to work collaboratively with the UK Dry Stone Walling Association (DSWA) towards implementing the trades training and accreditation scheme here in Australia," she said.

There are four levels within the Craftsman certification scheme, Level 2 or above is considered professional.

"There are only a handful of qualified dry stone wallers in Australia, perhaps because until now practitioners have had to travel to Europe or North America to train and become accredited. Working with the DSWA and Geoff Duggan, Australia's only Master waller and examiner, I'm hoping to change all that with the establishment of the Stone of Arc training center, so many more Australians can become custodians of the ancient art and traditional skills."

As well as a comprehensive training program, opportunities are provided for people to practice and become involved with community events. She also runs off-site workshops, school work placements, exhibitions and currently working with Wellington Arts on a project on the Mount Arthur walking track, which hopefully will lead to a group of young Aboriginal people learning the skill their ancestors mastered long ago.

Emma is a founding member of the Women's International Stone Alliance (WISA) established by women from around the globe who share an interest in traditional stone trades and want to make the craft more accessible to women. She said working with dry stone was a continuous apprenticeship, as every stone and design was unique.

"I've built structures in NSW, ACT, Victoria and Western Australia, as well as several European locations, and I learn something new every time. Dry stone structures mostly tend to exist in rural settings, though I've also worked in urban centers."

Building with dry stone is a very slow process so constructions can take many months of work. Each stone must be carefully placed in accordance with multiple principles.

"It's not uncommon to hear 'anyone can stack a pile of stone' and that is true enough, but to build a beautiful structure that endures the tests of time, that's a skill to be reckoned with".