James, Gwen and Chris Dockrill, Casino, run a piggery of about 150 sows of which two-thirds are either purebred Large White, Landrace or Hampshire sows. Photo: Jamie Brown

The Dockrill family of Pinedock Pastoral, Casino, are having a number of successes in the pig and cattle industries.

FROM running a piggery to operating a cow/calf enterprise, cattle fitting services and finishing steers for the Jap Ox market, the Dockrill family of Casino are making headways across a range of industries.

At Clovass, Pinedock Pastoral is owned and operated by fourth generation farmer Chris Dockrill and his wife Gwen, and their son James and his wife Jane.

They run both stud and commercial pigs, with a piggery of around 150 sows of which around two-thirds are purebred either Large White, Landrace or Hampshire sows. The remainder are a cross between the breeds.

"When I left school we had a small piggery of 15 to 20 sows, and we've slowly increased it to 150 sows," Chris said. "It was a commercial enterprise, but I decided I enjoy the challenge and breeding quality so established the stud 22 years ago."

Raising all pigs intensively, an ideal pig to the Dockrills is one with good carcase, plenty of length, good legs and feet and trueness to type.

"We mostly do natural matings with selective AI (artificial insemination) to introduce new genetics. If we see an outstanding pig at show or sale, we buy it, bring it home, put it in the quarantine system and introduce it to the herd after quarantine," he said.

They show and sell at three Toowoomba events and Forbes Pig Sale, Bedgerabong, where they were successful in exhibiting the top-priced boar that also won best exhibit of sale.

"We haven't shown at Sydney for a while, it is difficult to do with James and Jane having client cattle there, and no auction for pigs so it is not viable," Chris said. 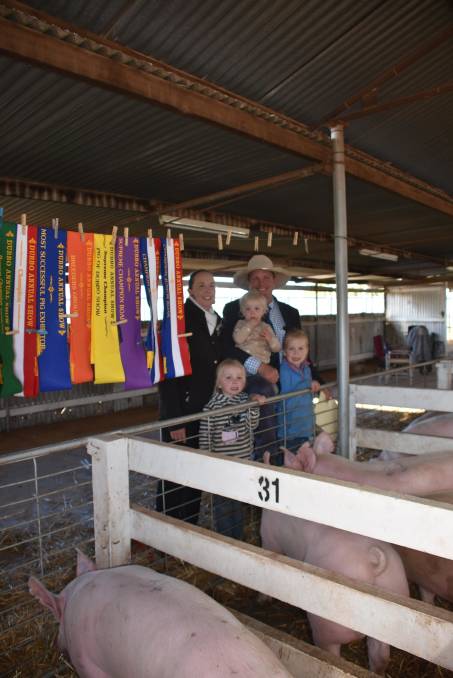 The bacon market is primary, with most of their pigs sold direct to processors including the processing facility at nearby Booyong, owned by Casino Food Co-op.

Chris said the ever demanding importation of pig meat is meaning the Australia producers can't get high prices at times like they should be able to.

"If the prices (in Australia) go up a bit, the imports increase," he said. "Other challenges are the environmental standards and African Swine Fever is making everyone nervous."

Alongside the pigs the Dockrill family also run a Jap Ox enterprise that buys in bullocks at around 400 kilograms and takes them through to 350kg dress weight.

"We buy whatever we can get, mainly Bos Indicus infused cattle to get more weight, scale and hybrid vigour into them," they said.

With their own transport, they have options as to whether they take them 15 kilometres into Casino or 200km over the border to Teys' Beenleigh plant.

The Dockrill's also lease the next door neighbour's property where they run 60 to 70 crossbred cows as part of a cow/calf operation with the goal of in time being able to produce some potential show steers. James and Jane Dockrill of Pinedock Fitting, Casino have around 120 head on feed at the moment. Photo: Jamie Brown

For close to 10 years now, James and Jane Dockrill have run Pinedock Fitting.

"I started out feeding show steers, then we got a few stud clients and it has grown into the business it is now," James said. "We have slowed up on the show steers, probably finding it more economical to feed show cattle for other people with the price you have got to pay for show steers at the moment.

"They'd probably be roughly 120 head at the moment on feed here, with a big swag of sale bulls going to the Queensland jobs. Ag-Grow is next... the way it's looking we will have 30 plus for Ekka."

The fitting business is pushing out somewhere around 80 sale bulls and 50 females this year, while they have the lead show cattle for different periods of time depending on the clients.

"First shows we normally take a lot of under 12 month cattle and then they normally go on to sell as two year olds, some three, depends on the markets people are chasing," James said.

Mixing their own pig and cattle feed, the Dockrills process the rations separately for quality assurance purposes.

"We grow our own hay for the cattle, while all our grain and commodities other than hay are bought in," he said. The interbreed junior sow of show and overall supreme sow of the Dubbo Show a Berkshire from River Glen stud, Forbes.

Judge Grame Hopf, Murwillumbah officiated 40 pigs at the Dubbo Show awarding supreme pig to the Dockrill family. The Large White, Pinedock Logger J943, was a five-month-old that also was the interbreed junior boar.

Interbreed senior sow went to the Corella Park, Taree with their Saddleback.