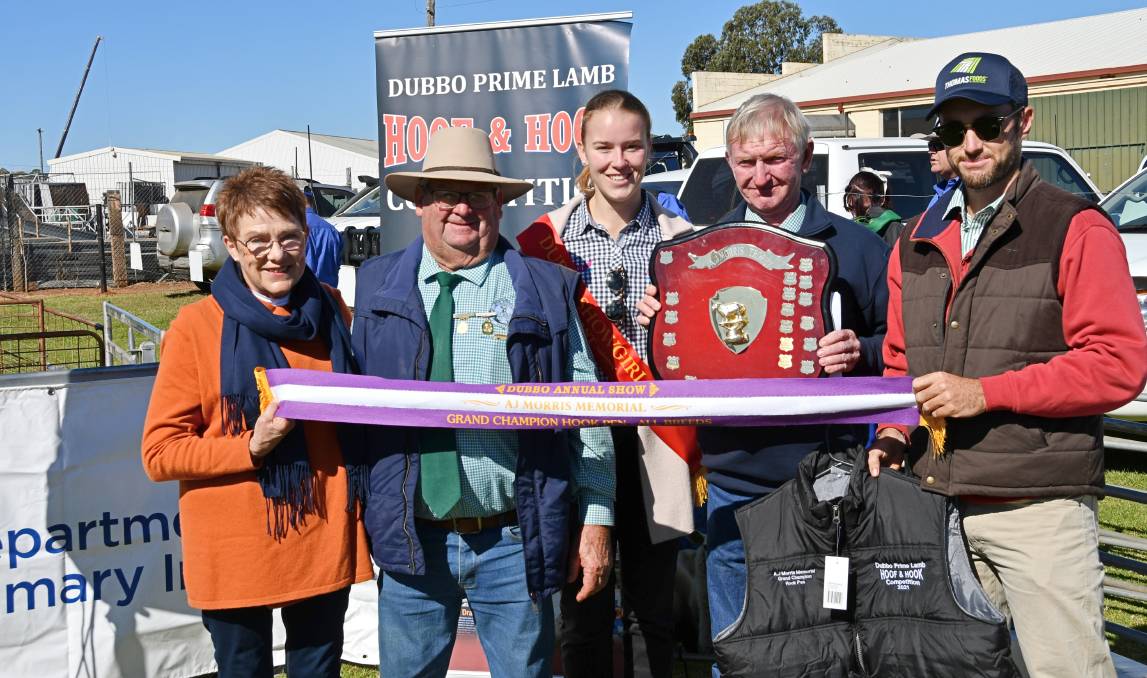 FOR the second time in its short history, the hoof and hook competition at the NSW Sheep Show in Dubbo has been taken out by local operation Annalara White Dorpers.

The Cresswell family claimed the Morris Memorial Shield for grand champion hook pen and highest scoring combined hoof and hook entry on its way to being the most successful exhibitor.

Annalara director Steve Cresswell said he was delighted with the result, although it was "very unexpected".

"In terms of preparing our sheep for this competition, we didn't do anything differently at all, in fact we were in a rush so they came in straight from the paddock, went over the scales once and that was about it," Mr Cresswell said.

"There was a lot of quality entrants and while the total number may have been down on recent years, the standard of the competition gets better every year."

Following the presentation of awards, the 29 lots of donated lambs as well as other goods such as pearl necklace and a Komoora Kelpies puppy were auctioned off by Nutrien Livestock.

All the winners from this year's hoof and hook competition.

AuctionsPlus purchased the top-selling lamb, which was Annalara's winning White Dorper for $5000, while Fletchers International Exports, which sponsored the event, was the day's busiest buyer, taking home eight lots.

"From what I understand, the previous best the competition has raised for charity was $26,000, so to go well and truly past that was unbelievable," Mr Cresswell said.

"The generosity that was shown during that auction was just fantastic and the charities the funds will go to will certainly benefit.

"It does give us some personal satisfaction because we were not expecting it and we really have to thank Auctions Plus for their generosity in purchasing the champion hook lamb, I hope they enjoy the feed in Sydney.

"The whole industry is ticking along really well at the moment and we need competitions like that to help everyone from the processors, to the producers and everyone inbetween."