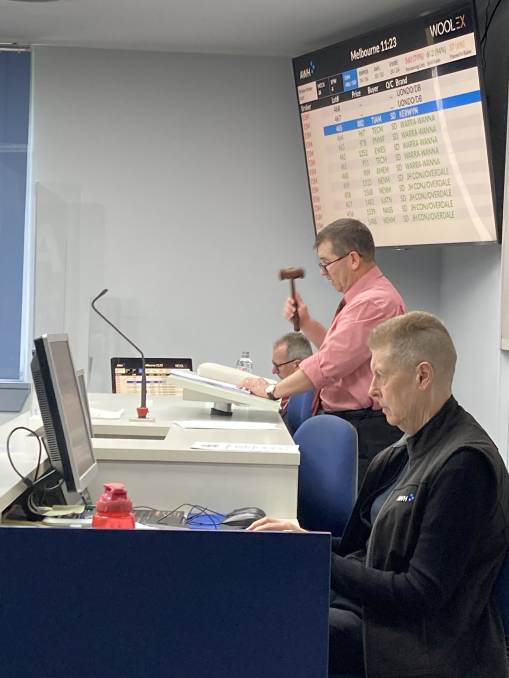 Clearances of wool at auction have been higher than in the early stages of the COVID-19 pandemic at this time last year, but retail demand, shipping and global economic factors have put downward pressure on values in the past week.

The Australian wool market managed to deal with a very big auction offering last week, and almost kept its head above the waterline.

Despite the rather sudden increase in sales volumes, and a resurgent currency that made prices more expensive for overseas customers during the early part of the week, the market closed only 13 cents a kilogram below the previous week's level.

This highlights how much better conditions are in the world of wool now, compared to during the early stages of the COVID-19 pandemic in 2020.

In US Dollar terms, the Australian wool market was 12c/kg cheaper at the close of last week's sales, and for those European customers not celebrating a public holiday, prices were 14c/kg below the previous week.

It is important not to lose sight of the strength of the core market for good quality Merino fleece.

Good buyer competition was evident for any wools meeting the traditional criteria and, without a sale in South Africa last week, Merino wool buyers were forced to focus 100 per cent of their attention on the Australian market.

These buyers did not have an excessive volume of wool to choose from.

But when the faulty Merino types and a sea of crossbred wool are added to the mix, the overall auction roster becomes large.

Psychologically, more than anything, this volume becomes a barrier to prices rising too much - and the typical playbook of overseas customers is to sit back and see if values will drop as a result.

Many exporters and traders left their quotes unchanged at the end of last week, and some business was starting to be done later in the week - indicating that an upwards trend should resume at this week's sales.

Mills and traders in China are focused on buying the right type of greasy wool for the upcoming rush of last-minute orders that they expect to arrive as the main retail season approaches.

There has been some talk that superfine 17.5 and 18.5-micron categories have become too expensive in comparison to other types, which nobody else in the trade would argue with - given the gap between 17 and 21-micron wools is still about $10/kg.

So, the buying intent will switch almost daily from superfine to medium Merino and back again as traders lay their bets.

Adding to the uncertainty about which type to buy is the less-than-steady flow of China's uniform orders.

Some of the anticipated orders are being shelved for now and others are coming out of left field.

Despite the dominance of the Chinese market as a buyer of Australian greasy wool, and the incredible surge in consumption of Merino and Merino blend garments in Chinese shops, many mills are still seeking to export early stage product or garment to their traditional customer base.

Frustrations are mounting throughout the trade as supply chain logistics get worse with each passing week.

During the latter part of 2020, when world trade was at its lowest point, low cargo volumes forced the global shipping industry to rationalise the number of ships plying the oceans.

Increased freight charges on these lower volumes were a typical market reaction, as shipping companies tried to survive.

But now, as freight volumes increase swiftly as the bigger world economies emerge from the COVID-19 pandemic, this is causing havoc in the supply chains of many products and commodities.

Container charges are rising as shipping companies, at times, hold an auction for the available space on a vessel - and cargoes booked at a "normal" rate are waiting on the docks until a vessel has an empty slot that has not been taken by a premium box of cargo.

Greasy wool shipments to China have been constrained by minimal sailing schedules and the mechanical failure of some dumping equipment.

But, in general, shipments to China are fairing far better than shipments to other destinations - or getting any cargo out of China to Europe or America.

The macro market trends around the globe, which have been pushing up commodity prices - including wool - had a bit of a hiccup last week when US inflation data was released.

Basically, the market has been humming-along - as the thinking has been that cheap money and low interest rates were here for the long-term. So, investing in commodities made sense.

When the inflation data showed a much higher read than expected, there was a growing train of thought that the US Federal Reserve Bank may be forced to slow down the supply of cheap money and raise interest rates sooner.

Despite reassurances from the Federal Reserve Chairman and others that no change in policy settings was imminent, or even being considered, those who have taken a long position in commodities are starting to consider taking their profits off-the-table.

So, while the conditions for growth - and therefore increasing commodity prices - are still in place, some trade repositioning is likely to see many markets settle back down as profits are taken.

How this affects the wool market is the stuff of crystal ball gazing.

But it will most likely make a super-cycle of continually rising prices for the next 12 months unlikely.

Instead, it would be prudent to expect the wool market to only operate on short-term factors and local market conditions.

This should result in calendar demand starting to wane in June and July, before increasing again towards the back part of the year - when attention turns to the 2022-23 garment season.

A successful retail season for 2021-22, kicking-off in earnest in September this year, will provide the confidence boost required for this next leg-up in prices.

So, we have our fingers crossed for a cashed-up, unrestrained European or American consumer to hit the shops then.