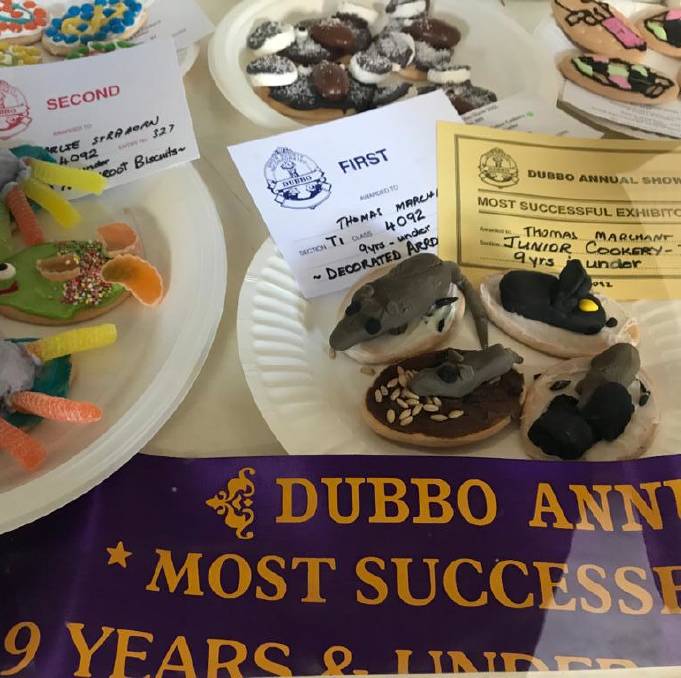 It was mice biscuits, not rice cakes that helped scoop the junior cookery 9 years and under most successful exhibitor prize for youngster Thomas Marchant at the Dubbo show.

Young Thomas's mice-themed decorations proved too irresistible for the judges in the decorated arrowroot biscuit for 9 years and under section, even as real mice scurried around in the Arts and Craft Pavilion at the Dubbo showground.

"Everyone thought they were really appropriate for the time and year, with the mouse plague we're going through," she said.

And they didn't need reminding of the issue. "We've got them running around the pavilion now as we're cleaning up," Debrah Davis said on Monday.

There was also a mouse theme for the grand champion scarecrow with the scarecrow holding a sign that said "mice $1", with the dollar crossed out and replaced with "free". A winner among the six scarecrows entered !

It was an up and down year in the pavilion after a year off because of COVID-19 restrictions. Cakes were popular entries in the Pavilion too at Dubbo show.

In terms of the number of entries, fine arts were up, handcrafts were down, flowers were "mediocre", jams and preserves down, honey and home brew up and mice themes up !