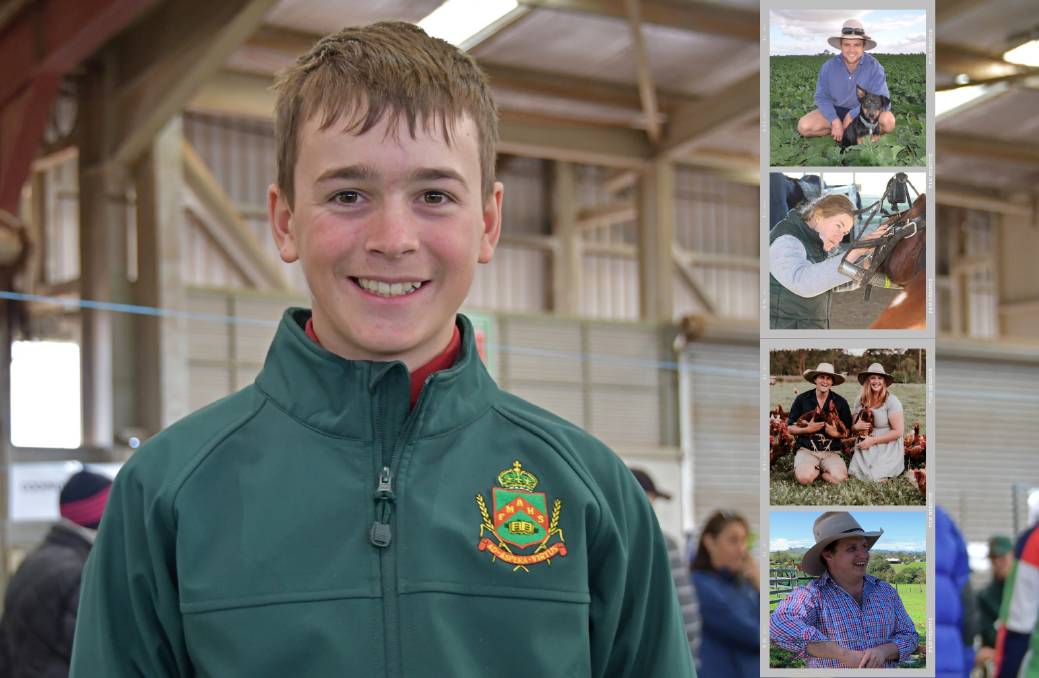 Part 3: Remember these names, they'll be the leaders of agriculture's future.

They say age is just a number and when it comes to the agricultural industry, nothing rings truer.

From 14-year-old woolgrowers to record real estate agents and even up-and-coming ring announcers, The Land has uncovered some of the brightest minds in agriculture.

All under the age of 35, they share a dep passion for the industry.

This is part three in a four part series released online at 6pm over the coming days. It's 4pm on a Monday afternoon and school is out.

But if you call the mobile of 14-year-old Bateson Pittman, you'll be met with one of the most formal and polite greetings.

The year eight border at Farrer Memorial Agricultural High School in Tamworth is only young but he is already showing knowledge of the industry far beyond those three times his age.

At his family's stud ram sale in Walcha last year AWN agent John Croake told the crowd the industry was in great hands having witnessed the young stud hand assisting prospective buyers throughout the day.

"I think a big part of my love of the Merino industry is that I have been brought up with it, with my family," Bateson said.

"As one of our main enterprises it's something each of the male generation coming through has worked with.

"We have been doing this intergenerational Merino sheep breeding for 115 years, since the early 1900s, so it's something I value for myself and for my family to keep something like this going on."

While their Merino numbers are back due to the harsh drought conditions at Walcha, it hasn't stopped Bateson from moving their stud forward with the times and acting as "encouragement" for his father, Paul.

Everything from showing, stud genetic decisions and ram selections are on his mind.

"I've always got his (Paul's) back and I'm always there on his toes to make the decisions as to what we need to do," he said.

"I'm the young stud man coming on and he can start to see that now.

"At the moment he is starting to make new and different decisions as to what we would have done 10 years ago with more showing of sheep, more stud sales and starting to do things we never did.

"I'm there to help him push that through and convince him to do things like going to Sydney Show for the first time this year."

As to where his future lies, Bateson admits he hasn't figured that out yet.

Animal husbandry or agronomy are on the cards but his passion is with animals.

"The big end goal is to continue the Merino stud but to get us to a level where we are probably in the top part of the stud game," he said.

"It wouldn't be as common to write an article about a young man in the Merino industry. It is something that has faded away over time...that's one of the things that worries me.

"Am I one of the fellas that's going to have to keep pushing this on or are there going to be enough blokes in it to keep going?"

One thing is for sure, no matter the animal welfare or pricing struggles facing Merinos, Bateson will face any of them. 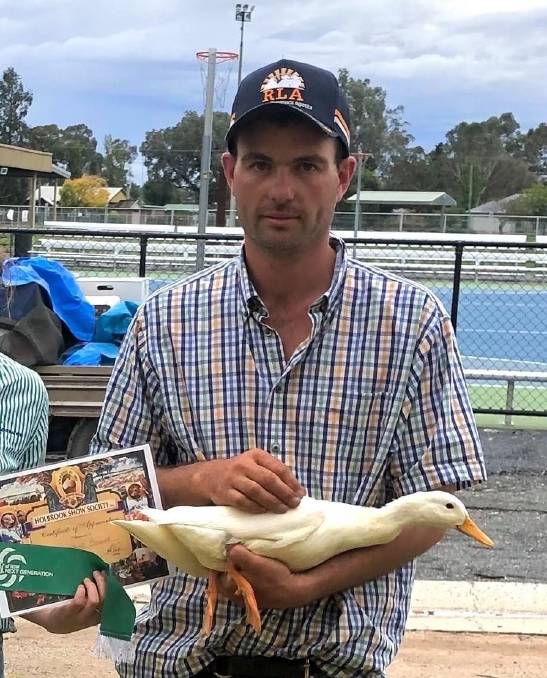 Not many people can say they've represented their small town at the Sydney Royal state finals for at least seven different junior show events - but Chris Bowler can.

Beef cattle, Merinos, Merino fleece, grain, poultry and waterfowl judging along with beef cattle paraders are just some of the sections he has excelled in.

He even went on to claim champion grain and reserve champion waterfowl judge.

Now 28, he is so passionate about the show circuit he has become the third generation in his family to sign up as a committee member of the Holbrook Show Society.

"There are very, very few younger people like myself or people below the age of about 30 involved in the show circuit," he said.

In a bid to ensure the poultry competition wasn't lost, Chris also took over as chief steward when he left high school.

His efforts to grow sponsorship has seen the shed house up to 130 birds for competition.

At this year's show Chris was acknowledged for his dedication with the ASC of NSW Next Gen Ribbon. Tim Eyes and Hannah Greenshields are first generation farmers on the NSW Central Coast selling their beef, chicken, eggs and lamb directly to consumers through their own brand, The Food Farm.

These proud regenerative farmers have grown their enterprise using only leased land, challenging conventional norms of farm ownership to satisfy the needs of ethical eaters through open storytelling and transparency. You could say that Jerilderie farmer Sam Sleigh has a bit on.

The 27-year-old runs a mixed-farming operation, alongside his dad Andrew and uncle Richard, which includes joining 5000 Merinos, 120 Hereford cattle, a 2000 hectare winter cropping program and 100-150 hectares of summer crops, where they grow rice, corn and seed sorghum.

It was the same thinking that led Sam to gain experience working in finance for Nutrien after completing his agriculture economics degree at The University of Sydney before returning to the farm.

"The plan was to come back to the farm, however, I wanted to get some experience doing something else just in case and it's also good business knowledge to have," he said.

This year the Sleighs returned to growing rice, after a two year hiatus due to drought, and it ended up being the big winner of the season - their Reiziq crop yielding a huge 13 tonnes a hectare.

But they're also adding new crops to the mix, planting grit corn for the first time this season, while Sam is on the lookout for other strings they could add to their bow. 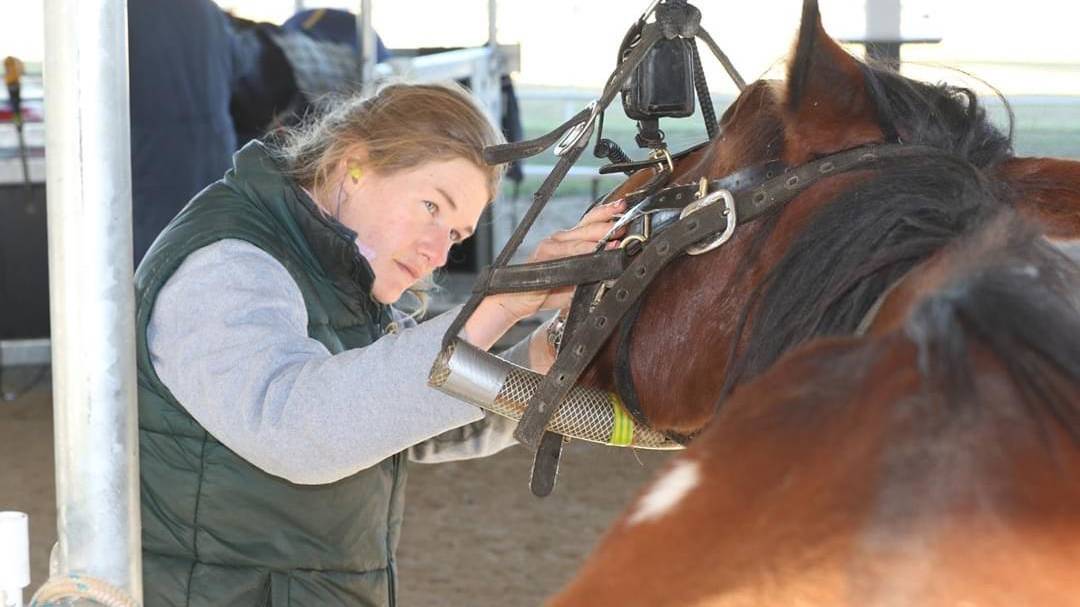 Ameliah, a fifth generation pastoralist, grew up on a station in the White Cliffs area.

Known as The Flying Vet - the only one of her kind in NSW - her patch covers everywhere west of Cobar to the South Australian border and sometimes she finds work just over the border.

But she says nothing beats working in her backyard - even if it is the size of a small country.

"You have to be able to deal with all animals in this area...as people out here need a good service with a vet that offers everything," she said. As chair of NSW Farmers Young Farmers, Rachel, who runs a free-range egg farm, says agriculture is an industry that contains all the possibilities of the future world and as young people they "have an increasingly important role in it".

"Its challenges are just as much a reflection of some of the wonders and joys of working in your environment, the reward of what we're capable of producing, and exploring what new innovations and technologies have to offer," Rachel said. Just last week Martin lobbied for farmers battling this mouse plague when he along with NSW Farmers called for the government to recognise it was a crisis.

But when he is not advocating for farmer's rights in his role as deputy chair of the Young Farmer Council, he is a farmer and territory manager for Growth Agriculture based at Delungra. He is also involved in NSW Farmers as a member of Grains Committee.

"Ag has a positive future due to strong commodity prices and a science and innovation driven culture that allows us to compete against highly subsidised global competitors," he said. 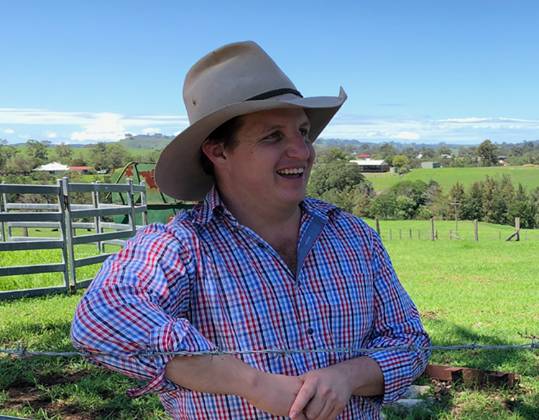 Tim works for NSW DPI in their Young Farmer Business Program as its program coordinator and is also a partner in the family farming business running superfine Merinos and Angus cattle.

Born and bred on the land, he studied law but realised it wasn't for him so went back to agriculture as there were great opportunities in the sector.

"Agriculture has always offered a great lifestyle and great people, but now with low interest rates and record livestock prices there are great market opportunities to take advantage of," Tim said.