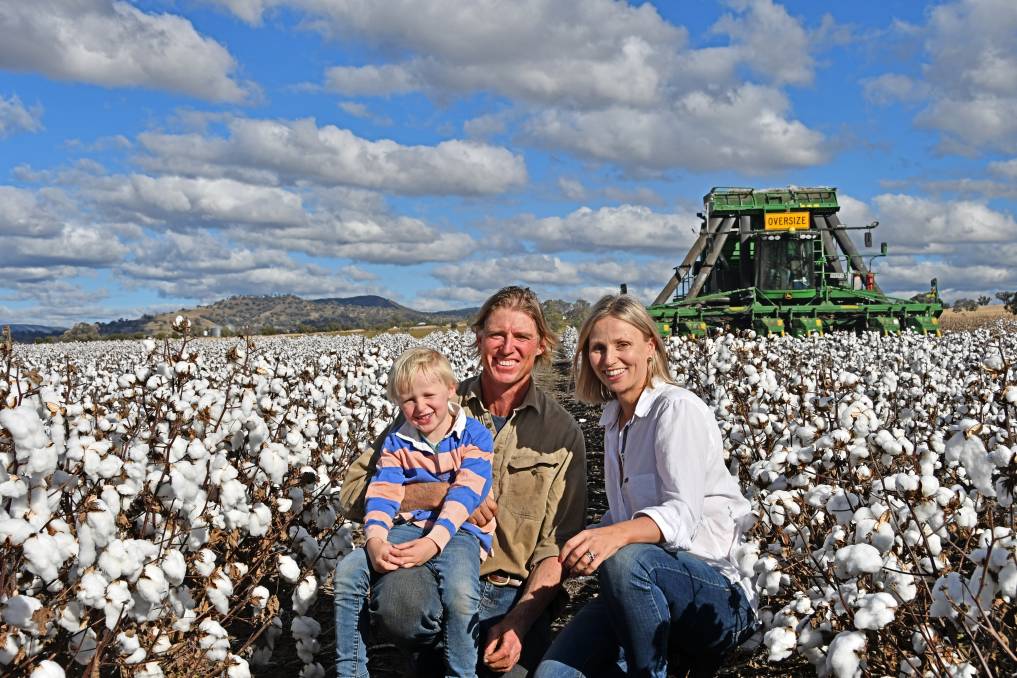 AN earlier than expected frost has been a setback on an otherwise bumper dryland cotton season for one Liverpool Plains producer.

Tim Langfield is currently in the process of harvesting 270 hectares of CSD-714 dryland cotton on his Bundella property Premer Hill, but the results could have been greater.

The property, run by Mr Langfield, his wife Emma and their children Mia, Will, Hugo and Darcy, was struck by a frost last month, which caused a downgrade of quality for a portion of the crop.

"We did get frosted in early April which was a little bit disappointing, so we probably lost two bales per hectare in the flat part of the block," Mr Langfield said.

"That area of the block was probably our best cotton in terms of having the most amount of bolls.

"It was quite an early frost for us coming in early April, if it had held off for another couple of weeks it would have been similar to the rest of the block and really bumped up our overall result."

The frost may have prevented the Langfields from achieving optimum returns, but Mr Langfield said other producers in the area were set for "a pretty good result".

"We sowed in early October, so that was pretty much on target for us, it was just an early frost coupled with a cooler summer which meant it was a bit slow getting away," he said. 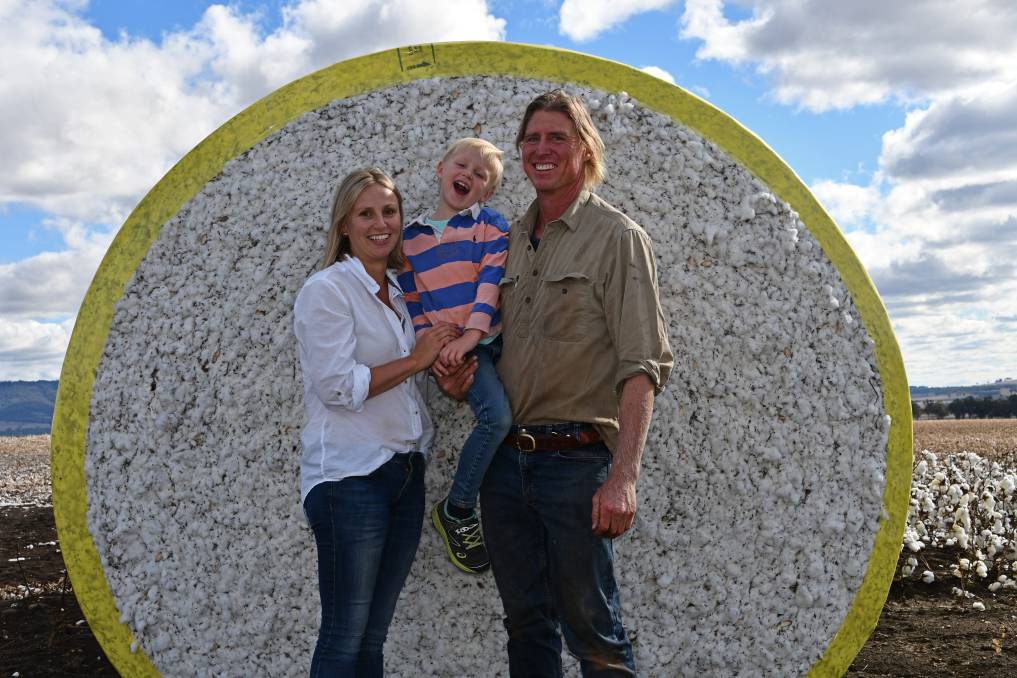 The dryland cotton season has been a success for Liverpool Plains producers Emma, Darcy 4 and Tim Langfield, Premer Hill, Bundella, despite the impacts of an April frost. Photo: Billy Jupp

"We're hoping it might go six bales to the hectare but you won't really know until we get it ginned.

"Anything over five bales to the hectare would be have been a win for us when we first planted, but as the season progressed it started to look better and better, so to get that frost when we did was pretty gut-wrenching."

Mr Langfield said they had already sold some of their cotton crop for $560.

"However, we won't be keen to sell anymore until we get it ginned because we are a little bit concerned with the quality of that frosted stuff, so we will wait and see."

The dryland cotton season has been a success for Liverpool Plains producers Emma, Darcy 4 and Tim Langfield, Premer Hill, Bundella, despite the impacts of an April frost. Photo: Billy Jupp

The dryland cotton makes up part of a mixed-cropping rotation for the Langfields with durum wheat earmarked to go in after picking is finished.

"At the moment, we are trying to mulch this block as quick as we can then we are going to farm it twice.

"We're thinking of sowing in some kind of ceral, most likely durum wheat, just to get some ground cover onto it.

"So far, we've sown a bit of canola, we're currently sowing some barley and wheat and once that's done we will sow some chickpeas at home around mid-June."

Further north, at Cecil Plains, in the Queensland Darling Downs, Tyson Armitage only started cotton harvest on Monday, two to three weeks later than normal due to the cool start to the season and the roughly 200mm they received in March, which extended the growing season.

He said despite losing some of the crop to boll rot from the March rain, there were decent yields being recorded around the district, with irrigated cotton yielding 12 to 14 bales.

Cotton Australia predicts 2.8 million bales will be picked this harvest, up from the 600,000 bales produced last year - the industry's lowest level of production in 37 years.

Cotton Australia chief executive officer Adam Kay said although harvest was generally three to four weeks behind schedule due to the mild season, yields had surprised with up to 17 bales a hectare, irrigated, and up to nine bales a hectare, dryland, achieved.

"Some of the dryland results have been phenomenal," Mr Kay said.

"There's a little bit of a concern about the fibre quality in the south but there hasn't been that much picked yet so we'll wait to see."

While, harvest in the north of the state is wrapping up, roughly 40 to 50 per cent of the crop has been picked in southern NSW. 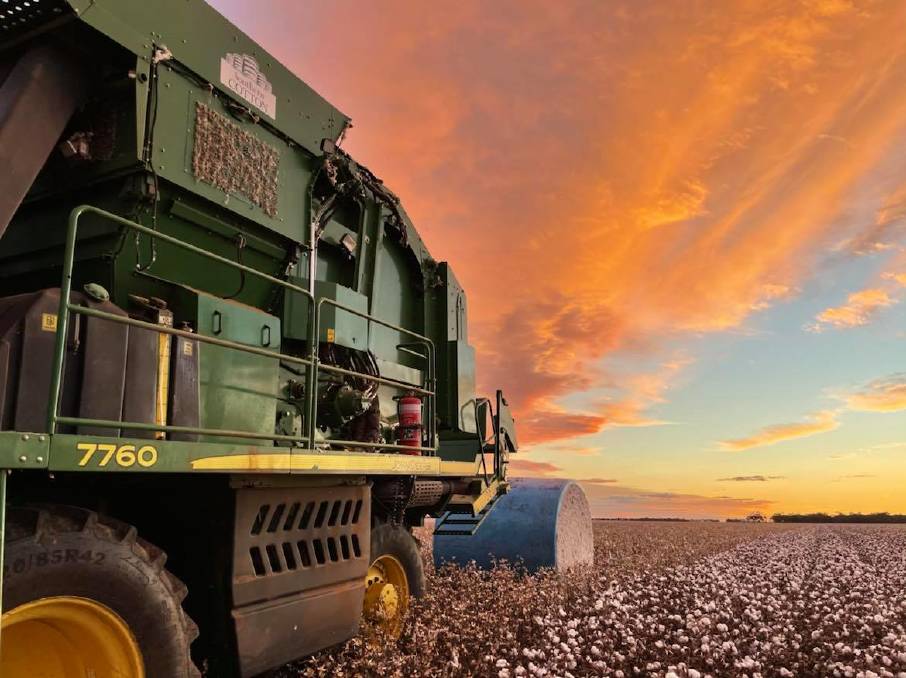 The cotton harvest in NSW is 40 to 50 per cent complete. Photo: Paul Flewitt

Southern Cotton farm manager Paul Flewitt reported that the mild summer had led to a reduction in water use, most growers using eight to nine megalitres a hectare, but above average yields of 14 bales a hectare were still being recorded.

Mr Kay said with improved water storage levels, growers were already looking to next year's crop, which is hoped to exceed four million bales, a level not seen since the 2017-2018 season.

"People have been able to put some of next year's crop away at a good price already," Mr Kay said. Cotton prices are currently around $550/bale, but were higher earlier in the year, coinciding with good rain in March.

Mr Kay said although the market had mostly weathered the COVID-19 storm it was still being challenged by China's boycott of Australian cotton.

"The industry's working really hard to expand existing markets and get some new markets going," he said, rattling off Vietnam, Bangladesh, Indonesia, Thailand and India as great trade prospects.