FarmGate Auctions has jumped on board as official sponsor of the event which runs from June 21 to 24.

Northern Beef Week will make a welcome return in June with 23 studs set to showcase first-drop progeny and new infrastructure.

Australia's newest online livestock selling platform, FarmGate Auctions, has jumped on board as official sponsor of the event which runs from June 21 to 24.

Many of the producers involved in this year's event still carry scars from their recent battle with one of the harshest droughts on record.

A clear hero to come out of that challenging period was the survivability of their core female breeding herd.

Those females have become the critical structure for which many producers are rebuilding their herds so it's not surprising that a large majority of the Northern Beef Week field days this year will feature displays of these leading ladies.

Froghollow Limousin stud at Black Mountain will display bulls by a mix of AI and current herd sires and are described as a "no frills package" bred to perform in a commercial breeding environment.

Just down the road at Niangala, Rocala Wagyu will have rare and sought after semen for sale along with bulls for both F1 and fullblood herds. With close to 20 years in the Wagyu industry, they have been breeding from only the best sires and dams for carcase data.

Bingilong Murray Grey stud at Guyra have notched up 50 years of breeding and selection based upon performance rather than statistics. Attendees will be able to look over cattle with a show background, but an upbringing under commercial conditions.

At North Dorrigo, Tandara Angus stud will have examples of progeny of top ranking AI sires. The stud concentrates on low birthweight bulls for herd rebuilding with heifers.

Highrent Angus at Walcha will display sons of Landfall New Ground, Te Mania Norvel and Kilburnie bulls NURP4, NURP54 and NURN70. Two thirds of the bulls on offer are suitable for heifers with estimated breeding values in the top 20 per cent across all indexes, growth traits and intramuscular fat.

Rounding out the first day is Southcote Shorthorns at Walcha which will feature a display of bulls available at their inaugural on-property sale later this year. Southcote genetics provide explosive growth and carcase traits to hit premium grass fed markets.

Santa Gertrudis cattle will be represented by Hardigreen Park stud at Wallabadah showcasing the first progeny from exciting new sire, Yarrawonga N90, along with the remainder of their sale team.

The Atkin family from Haras Simmentals at Manilla will have bulls available boasting sire lines back to overseas bloodlines with a variety of estimated breeding values. The stud has a diverse array of genetics through a long term AI program focus.

Harlees Limousin at Loomberah will also be open on the Tuesday with 30 females from the heart of the herd on display. The females will be the first Harlees females to be offered for sale on AuctionsPlus in July.

Warragundi Poll Hereford stud at Currabubula focus on commercial traits that typify the Hereford breed; eye appeal, structure and conformation are at the forefront. Among the animals on display will be progeny by 2018 Royal Easter Show Urquhart Trophy winner, Warragundi Minnesota.

Swanvale Herefords at Winton have an array of genetics, infrastructure and food on offer at their open day. The stud believes it stands out for the females that will be showcased on the open day along with Glen Innes Hereford Sale bulls, the first progeny of the $70,000 Wirruna P273, new stockyards in a new location and a home-made morning/afternoon tea and lunch provided by the Weller family. 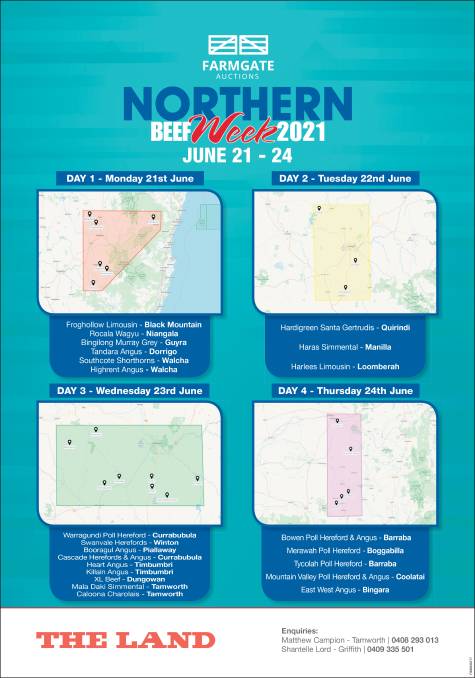 The Paterson family of Heart Angus at Timbumburi believe females are the cornerstone of maximising client's profits and only retain females that meet a strict criteria of fertility, structure and heavy weaning weights. Those females allow them to produce the sale progeny that will be on display boasting equally impressive sire lines including the first sons of Millah Murrah Nectar N334 and the first son of Musgrave Exclusive to sell in Australia.

Killain Angus at Tamworth is based on the world's finest and oldest Angus herd that consistently grosses between US $8-11 million at their annual sales. The stud will have its 2021 yearling sale bulls on display that can remain on property until spring and also have six months insurance attached. Resident sires like show champion Killain Rainman P1 and the remainder of their show team will also be ready for viewing.

XL Beef at Dungowan will present their yearling bulls for sale later this year including sons of Baldridge Beastmode, Spickler Powerpoint, Landfall Keystone, Millah Murrah Ll32 and their own sire NVNP8, a grandson of one of influential female, Ardrossen W38. Most of the bulls on display offer calving ease with growth estimated breeding values in the top 20 per cent of the breed and good carcase merit. Additionally 30 registered heifers will be for private sale on the day.

Mala-Daki Simmentals at Tamworth will display a preview of their sale lots, autumn calving cows to demonstrate maternal qualities and R drop weaners. The stud believe their genetics would provide the opportunity to produce calves with increased weight gain and profitability.

Caloona Charolais at Tamworth made headlines at the Sydney Royal in 2019 when they won the Hordern Trophy with Caloona Park Nugget. Some of his first progeny will be on display and showcase the superior performance in the paddock their cattle can achieve.

With a resume boasting 58 years in stud cattle breeding, Bowen Poll Hereford and Peakes Angus at Barraba have a female herd run on native grass country, focused on fertility, doing ability and soundness with optimal carcase traits. Sale bulls will be on display sired by breed leading sires and pedigrees stacked with elite cow families.

Merawah Poll Herefords at Boggabilla will have a display of cattle. Their genetics are in use from the Northern Territory to the western districts of Victoria with their bulls producing high graining steers and females that make a great cow herd.

Tycolah Poll Herefords at Barraba are renowned for consistency of type, quality and depth of fleshing. Sale bulls will be on display including the first sons by $51,000 New Zealand sire Koanui Techno 6179 and bronze world champion bull, Tycolah Queenscliff N029 along with sons of Allendale Bingara K184. A feature bull is Tycolah Southland Q010 who was grand champion bull at the New England Hereford Feature Show at Guyra this year.

Mountain Valley Poll Herefords and Angus at Coolatai will open their gates off the back of a highly successful stud sale last year which peaked at $20,000 and saw Herefords average $7482 and Angus bulls averaged $6941. Stud principal Ian Durkin was recently named chairman of Herefords Australia.

Rounding out the event is East West Angus at Bingara who have three generations of the previous record price Angus cow in Australia. The stud is producing cattle that people want, not what they're told they need.