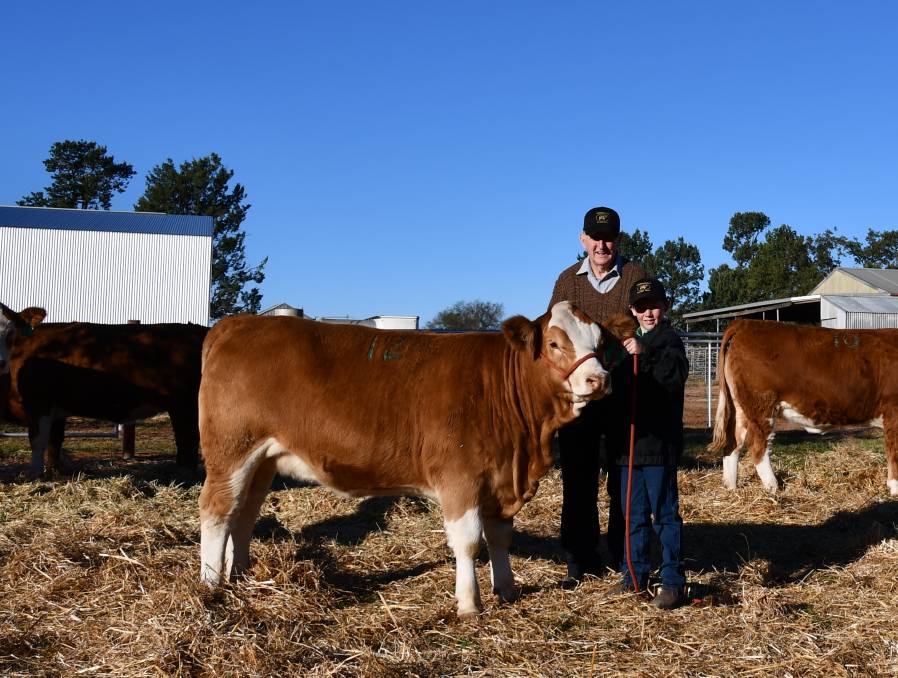 A feature of the sale was the strong demand for the female offering and family spokesperson, Carl Baldry noted the listing of seven cow and calf packages.

"This is first time for long time we have been able to offer these genetic packages," Mr Baldry said.

"Five are also PTIC to one of our leading sires Tennysonvale Piler (PP), while two are unjoined."

The top price in the bull offering was $10,500 paid for Tennysonvale Queenslander (P) when bought by Doug and Juanita Birch, Three Moon Fleckvieh, Monto, QLD.

He attracted the eye of Mr Birch, who had seen him at Beef 2021 in Rockhampton, Qld, for his quiet temperament, sound conformation and impressive set of figures.

"On our country we need cattle to cover the distance and I think he has the traits we want," he said.

"We join the Fleckviehs to pure-bred Droughtnmaster commercial females for steers to enter the feedlot of grass at 400-450kg and go through to heavy bullock weights."

"She is type that I am breeding - early maturing, with thickness, depth and width," Mr Knox said.

"In Europe and in our markets we get paid 'weight-for-age' and that is what I am aiming for in my breeding program."

The 15-month old unjoined daughter of Rivulet Handsome had been reserve junior champion at the 2021 Canberra Royal and weighed 494kg.

A feature of the offering was the donation of the sale of Lot 44, Tennysonvale Gotsa (PP), a 25-month-old son of Tennysonvale Merv, who was bought for $8000 to the Mito Foundation in support of research into the debilitating genetic disorder Mitochondrial disease.

Elders also waved the commission on this bull.

We had tremendous demand for our females, as always and it was pleasing to see return buyers giving support for our bulls - Nathan Baldry, Tennysonvale Simmental Fleckvieh, Illabo

Speaking after the sale, Nathan Baldry said his family were ecstatic with the result.

"We had tremendous demand for our females, as always and it was pleasing to see return buyers giving support for our bulls," he said.

"It is gratifying to have the support for our breeding program."

The sale was interfaced with Elite Livestock Auctions and settled by Elders, Wagga Wagga, while Michael Glasser, Ray White GTSM, Albury, was the guest auctioneer.