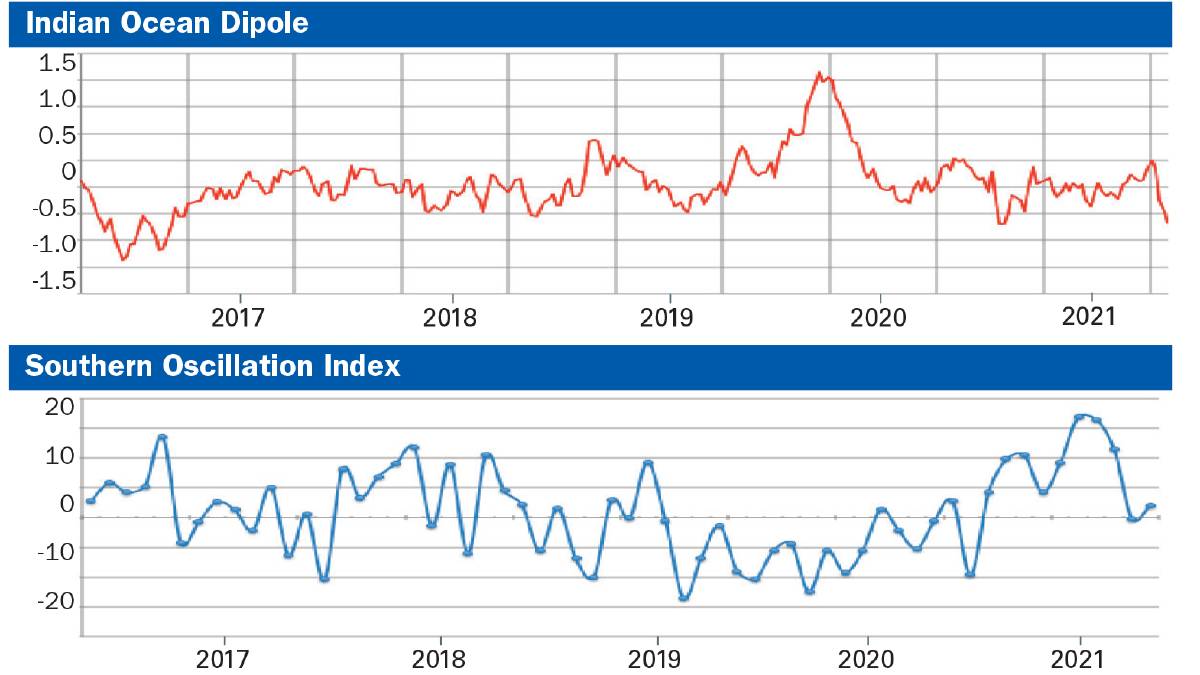 The Indian Ocean Dipole, a key indicator for inland winter rainfall, has recently dropped into negative territory which is a good sign.

The principal climatic indicator, the El Nino-Southern Oscillation (ENSO) in the Pacific remains neutral and most climate models now expect this to remain neutral for at least the next six months.

All indicators are neutral as well - the oceans have sea surface temperatures (SSTs) in the neutral range across the tropical Pacific while the associated atmospheric indicators, such as the Southern Oscillation Index (SOI), the tropical ocean cloud patterns and the south-east trade winds are also ENSO neutral. The SOI 30 day running mean has dropped a little in the past week but it is still around +4 so just on the positive side of neutral but within the range.

To the north, a weak pulse of the Madden-Julian Oscillation (MJO) is passing through the Australian region but too late in the season to have any effect, apart from causing a possible increase in showers on the tropical eastern coast of Queensland.

To the south, the Southern Annular Mode (SAM) index is slightly negative now after being positive for a lot of May and it is favoured to remain negative to neutral for a couple of weeks. By early winter, a negative SAM can increase rainfall potential over Victoria and southern NSW and slightly reduce rainfall over parts of eastern NSW and south-east Queensland but a neutral SAM has little influence one way or another, so SAM is not assisting current climate projections.

To the west, close monitoring of the Indian Ocean and the Indian Ocean Dipole (IOD) will continue to be required in the coming weeks, because it will hold the "clue" to winter rainfall potential in south-east Australia. The IOD is currently neutral, although it has dropped in the past week.

Large parts of the eastern Indian Ocean are warmer than average, with some cooler than average water near Africa. Some climate models indicate the IOD is likely to remain neutral during winter, although a couple continue to suggest negative IOD conditions could develop in the winter.

A negative IOD increases the chances of above average winter-spring rainfall for southern Australia, however, signals are fairly weak and the trend of the IOD in the coming weeks will be important but some signs are encouraging.