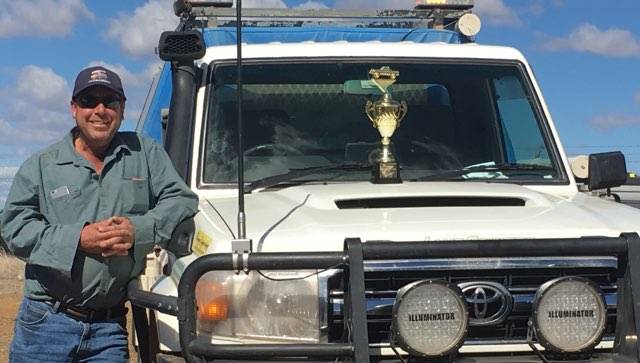 Next week's Guyra sheep sale will have a charitable edge to it.

WHEN several pens of lambs are knocked down at the Guyra saleyards next Wednesday, the proceeds will be going to a good cause, thanks to one Guyra local.

The funds will go directly to the Westpac Rescue Helicopter Service via Guyra farmer Tony Looker, who is taking part in the annual Drover's Run charity event.

The 16-day fundraising drive covers more than 5000 kilometres of the Outback, starting on August 6 at Menindee before the participants make their way to the finish line at Tamworth.

To help raise funds for the cause, Mr Looker along with Elders, Guyra and Armidale, are encouraging producers to donate the proceeds of the lambs sold at next week's sale to the effort, which goes towards assisting the service's operations in rural areas.

A fencing contractor by trade, Mr Looker has completed the Drover's Run twice and took out the top fundraiser award at the 2018 event.

"The Westpac Rescue Helicopter has helped so many people in the bush and I just want to do my bit," Mr Looker told The Land.

"I know quite a few family and friends who have used the service in the past and I think it's really important to do what we can to ensure it is there around the clock to help those who need it."

Anyone looking to donate the proceeds of their sold lambs is asked to provide a separate NVD form for the donated stock with the owner declared as Westpac Rescue Helicopter Service.

"I'm a hobby farmer myself and I just thought a lamb drive would be a great way of donating to the service," Mr Looker said.

"All of the proceeds raised from the lamb drive and along the way go directly to service.

"Missing out on last year's event due to COVID-19 was really tough because this is such a wonderful cause.

"You get to see a part of the country you otherwise wouldn't see and get to raise much-needed funds, which all go to the service along the way.

"Another highlight of the Drover's Run is seeing all of the regional communities you pass through getting behind it as well, it's just amazing."

Following the sale, Guyra publicans Shane and Naomi Davidson will host a fundraiser on June 26 at the Royal Hotel, which will also support the service.

"Those guys have been fantastic with their support," Mr Looker said.

"They will be hosting a wood raffle and a charity auction on the night, so it should be a great time all around."