As vets battle to treat an "astronomical" number of poisoned animals during the mouse plague, blood donor dogs are being called on again and again to save the lives of countless pets.

As veterinarians battle to treat an "astronomical" number of poisoned animals during the mouse plague, blood donor dogs have been called on again and again to save the lives of countless pets.

Due to the most common type of mouse bait being an anti-coagulate which interferes with the liver's ability to produce normal blood-clotting factors, poisoned animals need blood transfusions from animals with the same blood-type.

Unlike plasma, which is also required to treat poisoned pets, blood cannot be purchased by vet surgeries. Blood needs to be fresh and it can't come from just any dog.

In addition to being healthy and fully vaccinated, blood donor dogs need to be large in size, not too old, to have never received a blood transfusion themselves and - if female - to have never had a litter of pups. Ideally, they also need to be de-sexed.

Then on top of all that - donor dogs need to have the same blood type as the dog needing the transfusion.

With prerequisites like that, it can leave vets with a narrow field from which to get the vital blood they need. Throw in the urgency of a poisoning where time is of the essence, and it becomes clear just how crucial the right donor dog is.

While many vet surgeries need to turn to dogs owned by their own staff or client animals, Orange Vet Hospital is unique in that it has its own donor dogs on site - who are additionally special in them being greyhounds.

Greyhounds are one of the very few breeds that can provide blood transfusions to all other dogs - no matter their blood type, explained veterinarian Dr Georgia Ladmore.

It's a feature which essentially makes the greyhound blood which flows through Rumour and Rosie the dog equivalent of O-type blood. 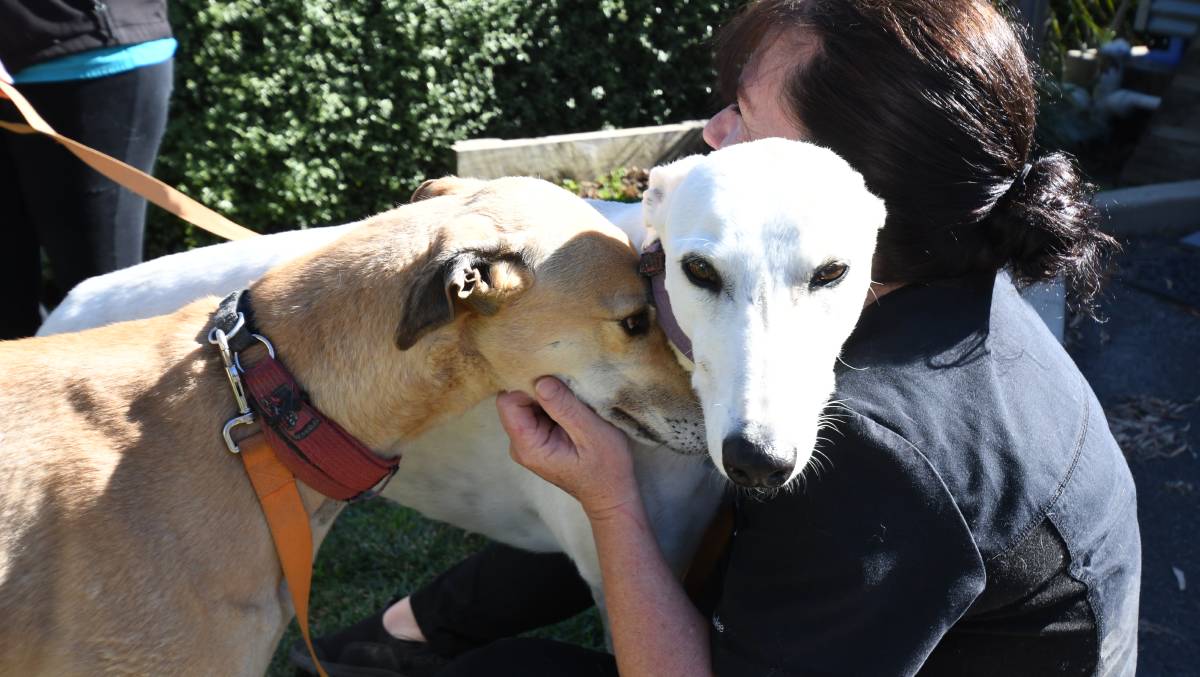 "Greyhounds are pretty special in their ability to be blood donors," Dr Ladmore said.

"Greyhounds are great because they're universal blood donors, and they've got such lovely temperaments, which makes a big difference.

"Dogs have different blood types like people do and they're the ones that can donate to any dog."

Rumour and Rosie can each provide 450mils of blood every 10 to 14 days, but with the number of poisoned dogs coming into Orange Vet Hospital skyrocketing due to the mouse plague, the surgery has had to start turning to staff dogs.

"It has become difficult [but] ... we're making it work," Dr Ladmore said. "This is unprecedented. This is completely unprecedented."

Molly the five-year-old great Dane is another donor dog who has been providing urgent blood for dogs poisoned by bait during the plague.

For the past two years at all times of the day and night, Molly and her family have come to the rescue of dogs needing transfusions at Summer Street Vet Clinic.

All three of Rebecca Milne's great Danes have been donors for the clinic over the years - first with Molly's mother and father Milly and Patch before Molly took on the important role.

Like greyhounds, great Danes also have a universal blood-type that can be transfused into any other dog. Additionally, Molly has a placid, friendly temperament, which is another ideal feature in a blood donor dog. She seemed to even enjoy going to the vet.

While the Summer St Vet Clinic hasn't experienced poisoning numbers anywhere near other vets in Orange, Molly and her family have been on call throughout the mouse plague, Mrs Milne said.

"There's been a few dogs in the past couple of weeks [needing blood after being poisoned]," she said.

"They'll ring us up and say we need her straight away and we drop her down there and she stays overnight, then we go pick her up the next day."

Everyone was a winner at Mudgee Gooree Cup day

Symptoms of poisoning from mice bait most commonly include difficulty breathing, loss of appetite, lethargy and pale gums, according to Dr Ladmore.

Time is of the essence when it comes to treating poisoned pets - which, as well as dogs, has so far included cats, ponies and even some wildlife.

"It's really variable, so a very small amount can still have disastrous consequences," Dr Ladmore explained.

"If we can get them fast enough we can try to do our best with lots of blood transfusions and plasma transfusions ... and plenty of vitamin K.

"The longer they're left, the more complicated treatment becomes and the dicier it is."

Residents who suspect their pet has ingested poison are urged to contact their local vet immediately.