Snow is predicted right up the Great Dividing Range to even lower than 900m on Wednesday and Thursday, with potential for blizzards in some parts of the Northern Tablelands and Barrington Tops producing very dangerous driving conditions. Photo by Andrew Norris/Orange during 2019 snow event.

Blizzards with possible heavy snow may occur on the Northern Tablelands on Wednesday and Thursday as a polar blast runs right up the spine of NSW.

A rare occluded cold front will see anywhere along the front's line see heavy and persistent rain and or snow as it slowly moves east. Falls of up to 100mm of rain have been predicted on parts of the Monaro.

Local Land Services also issued a warning to livestock producers to prepare for the cold blast and make sure they had adequate feed for stock.

In what could be an extraordinary snow event, some parts of the Northern Tablelands will see heavier snowfalls than some areas of the Snowy Mountains, according to Weatherzone forecaster Graeme Brittain.

Also there will be strong and dangerous winds in the Upper Western area as the weather event unfolds over the next two days. Up to 80km/h winds have been predicted there tomorrow morning.

Mr Brittain said the snow in the Tablelands above 1000m could be the heaviest seen in a long time, bringing dangerous driving conditions, with trees possibly losing branches under the weight of snowfalls and falling on to roadways.

There would also be dangerous driving conditions and blizzards were possible in the Northern Tablelands above 1000m and the Barrington Tops.

Snow was predicted at this stage down to 900m, but could definitely fall lower than that, he said.

Although minimums will not be as low as recent weeks, daytime maximums will be 6-9 degrees below average, with Orange expecting a maximum of just 3 on Wednesday, Dubbo 9, Walgett 13 and Tamworth 11. 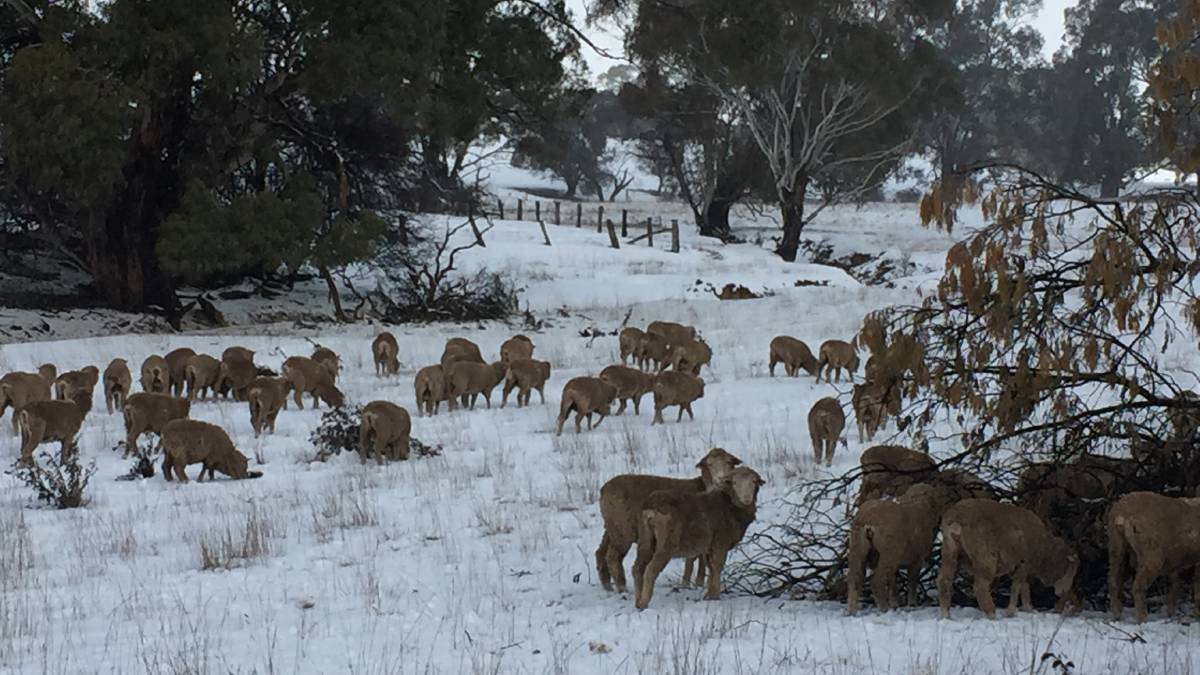 The August 2019 snow event in the central-west.

"There could be up to 10cm of snow in some of the higher parts of the Northern Tablelands," he said. Even more snow was possible.

The nature of an occluded front will see cold air meet another cold air mass from a warm front, pushing the system upwards, meaning the winds in this area will be lighter, but will mean the system will move a lot slower than a normal cold front, and anywhere along the front's line will see persistent snow or rain.

It will also bring a massive dump of snow of up to 70cm in the Snowy Mountains (just as the ski season starts), but this will be mainly on east facing parts of the ranges due to the unusual formation of the occluded cold front.

"There could be prolonged rainfall in many areas of south-west and south-east NSW and down into Victoria," Mr Brittain said.

The system will only slowly move away on Friday, with daytime temperatures increasing but minimums falling.

Local Land Services is urging livestock producers to prepare for the conditions.

Animal Biosecurity and Welfare Business Partner Scott Ison said sudden drops in temperature can negatively impact livestock, however, there are several ways landholders can reduce the impacts of a cold snap.

"We all know winter can be a shock to the system for us, as well as our livestock, so it is important producers are thinking about what they can do to ease the effects on their animals," Mr Ison said.

"If possible, landholders should move their at risk livestock to sheltered paddocks and increase their feed to meet the extra energy requirements the cold weather brings.

"When temperatures drop, livestock need more energy to stay warm, so producers should consider increasing their feeding levels by 10 to 20%, especially if there is rain and strong winds.

"Animals that are most at risk, such as freshly shorn sheep, sick animals, calving cows, lambing ewes and newly born lambs and calves, should be checked regularly while the cold conditions persist."

Agriculture and Plant Biosecurity Business Partner Andrew Lieschke, said the cold snap is also a timely reminder for producers to think about the feed requirements they will need through winter.

"For most, winter to early spring is when the feed gap is most likely to occur, as the days are cooler and daylight is shorter, resulting in slower pasture growth," Mr Lieschke said.

"Understanding your available pasture and animal requirements will allow producers to predict their feed gap and stay as productive as possible through winter."

"Thinking about this now, will allow you to forward plan and make on farm management decisions early.

"Ensuring livestock maintain appropriate condition through winter is vital moving into spring lambing, calving or joining, and has a big impact on productivity."