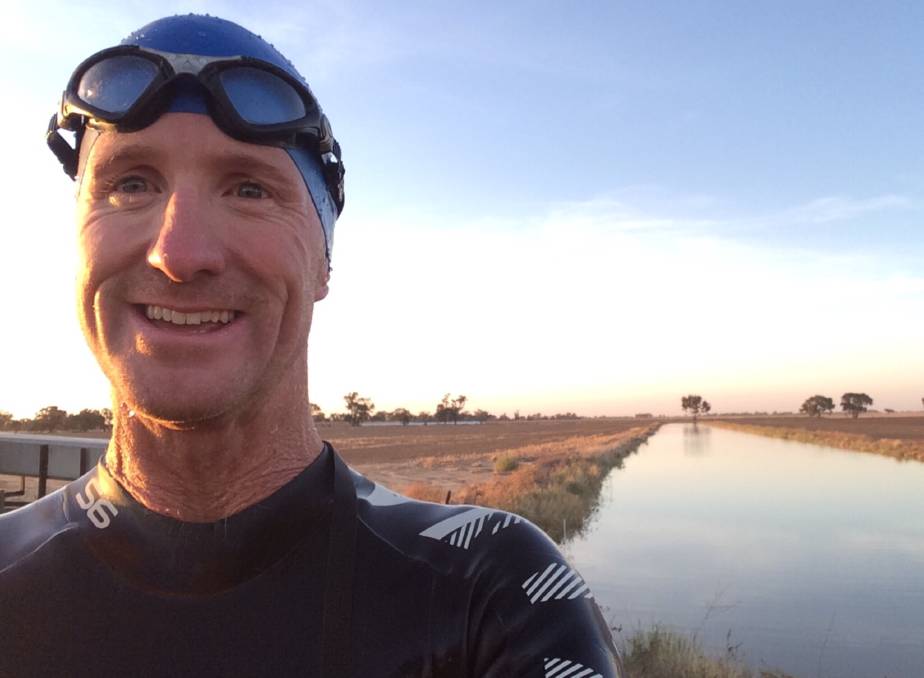 When COVID shut down the pool, Luke resorted to swim training for triathlons in the irrigation channel. Photo: Luke Barlow

Farmer Luke Barlow started a 'Rain Run' during the drought.

Moama farmer, Luke Barlow, is the first to put his hand up and say he's a terrible runner, yet despite this disclaimer, since he started training he has completed marathons, triathlons, Ironman 70.3 races and his own annual Rain Run.

Luke, who crops 2000 hectares and runs Merinos, said it was his wife, Kate, who inspired him to get into fitness, already hooked on marathons herself.

Prior to his first marathon in 2016, Luke weighed 109kg, but after 10 months of training he had dropped down to 82kg and completed the Melbourne Marathon in four hours and 16 minutes, raising $10,000 for Beyond Blue with Kate.

It was during the drought that he borrowed a bike off a neighbour and he and Kate joined the local triathlon club - allowing them to find a group of people removed from farming.

"It's easy to talk farming all the time, you go to clearing sales, field days, to the footy, down to the pub and you talk about farming," Luke said.

"When it was bad it was just too negative, you need to find a positive space, and that was meeting some mates on a Wednesday night and sweating it out."

Luke said unlike the drought, achieving his fitness goals was something he could largely control. "After consecutive dry years, trying to farm, doing everything right and not achieving what you set out to, it was quite confronting," he said. 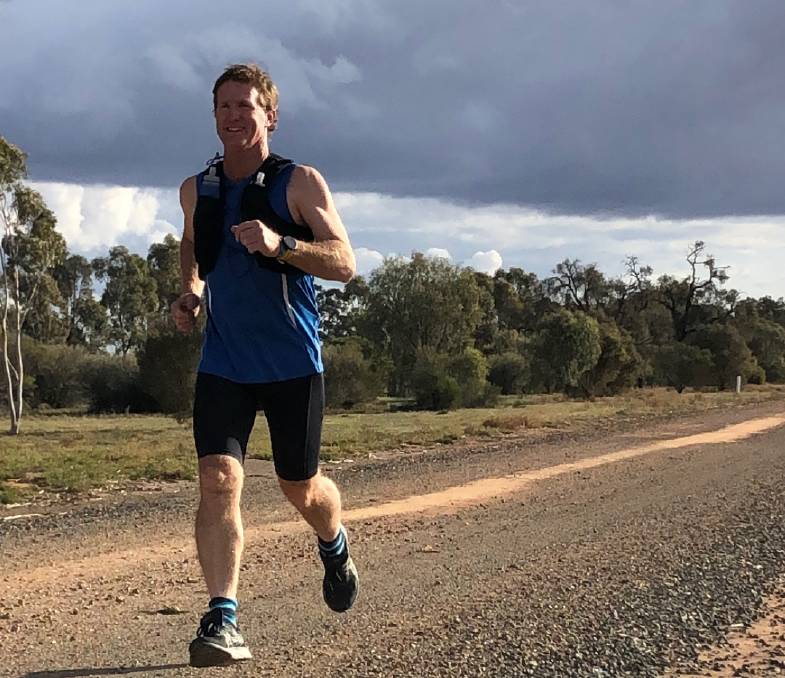 Luke only started running around five years ago and since then has completed marathons and Iron Man challenges. Photo: Luke Barlow

He has now managed to combine farming and fitness - coining the 'Rain Run.'

Luke said in 2019, after two years of drought, there was a promise of a good autumn break, with a significant front forecast.

So, he thought he would challenge himself to run a kilometre for every millimetre of rain that fell over that forecast period.

"I was putting my neck on the line because the forecast was 80mm to 100mm and the longest I had ever run was 42km.

"But we ended up with 26mm - a downgrade on both aspects, because we were looking for a great autumn break to break the monotony of the dry, and I was also looking for a bit more of a challenge than 26km."

To make the run a little more difficult, Luke decided he would complete the 26km on December 26. "That was quite a challenge to pull off on Boxing Day after Christmas but we got it done."

Luke said people started asking if he was doing the Rain Run again the next year and there was another big break forecast.

"We ended up getting 63mm which I thought was more like it, it gave me something to train for over winter," he said.

"The gauntlet was thrown down again this year, in March the forecast got up and we ended up getting 59mm."

Swimming upstream in the Murray

While running is the triathlon section that Luke least enjoys, swimming is his favourite leg. But, when the pool closed down last year due to COVID he was left to do his swim training in the dam or irrigation channel - until he decided to join a club that swims laps in the Murray River, in all seasons, both downstream and upstream.

"The flow's dropped right off now with the irrigation demand so it's possible to swim upstream for say 30 minutes and it would take you 15 minutes to get back," Luke said.

"In the autumn or spring when the river's running fast you might only swim 600 metres in 30 minutes and it might take you four minutes to get back."

"But a lot of the farmers who saw me running up the road, who originally thought I was mad, eventually would stop, ask what I was training for and say 'I'd love to try it.'

"So I began to put some of my fitness stuff on my Twitter, with my farming posts. If it can convince one person to give it a go and get as much joy out of it as I do, mission accomplished."

I hate mice’s to pieces. If there is one thing endurance sport and farming have in common it’s accept, adapt and evolve. Giving up is never an option.#nolimitspic.twitter.com/mEI0jRy0xL

In Luke's latest video post he is dressed in his running kit explaining that he had decided to go for a run after a difficult day resowing a wheat crop due to mice damage.

In the video Luke said "it took a bit of courage to front up this morning...to come over here and do this job today".

"Mentally it it's not a great thing to have to resow crops...so I thought I'd chuck some running gear in and at the end of the day have a trot around the district...to wake the system up again."

"On a race day, you might get four hours into a five hour event and get cramps.

"You can't stop and feel sorry for yourself, you've put in all the work, you have the support to pull you through and somehow you find a way to overcome.

"That's what farming's about, we rarely get halfway through the year or a plan, and pull the pin, we seem to reassess the situation and find a way to get through."

Re-sowing their wheat crop has turned out to be the right option to allow the Barlows to get through this year, with another 10mm of rain last week ensuring that the crop will be well on its way.