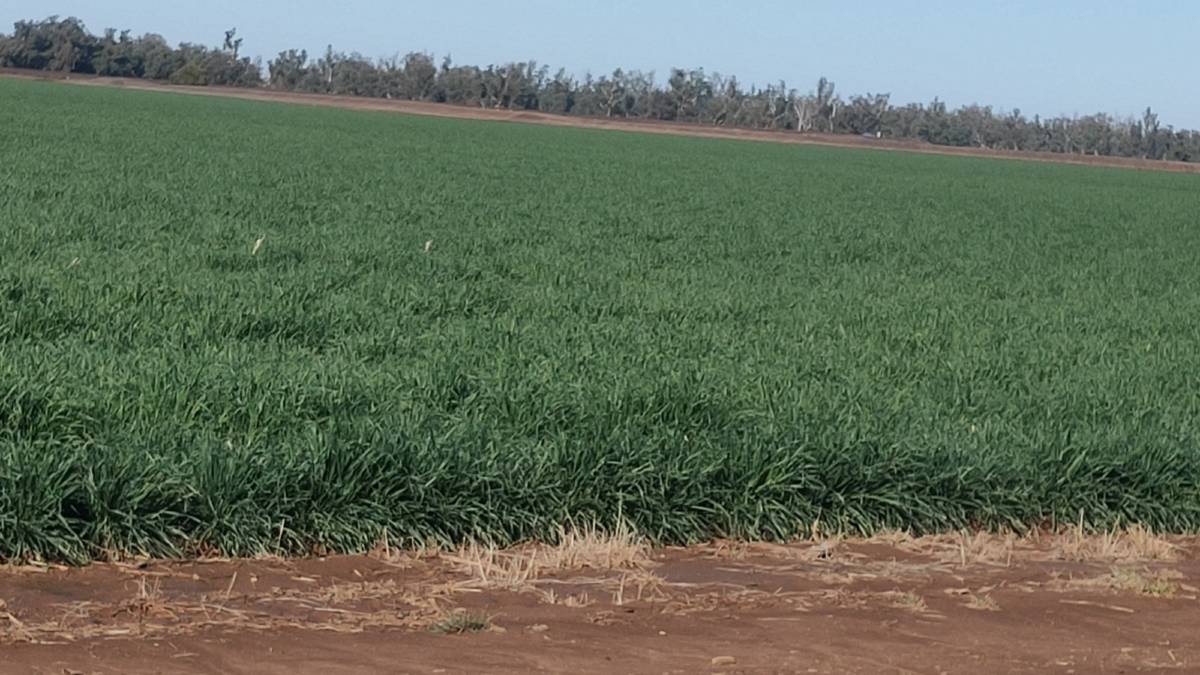 A wheat crop yielding 5.0 t/ha will remove around 100 kg/ha nitrogen, as well as 15 kg/ha phosphorus. In total cropping rotations nutrient budgeting and matching offput with replacement is a way to keep soils fertile.

Deciding on what is an appropriate nitrogen fertiliser rate to apply to a crop, especially one well on the way, is no easy decision.

A lot of media discussion has focused on high crop nitrogen needs, as well as how nitrogen is the single biggest factor facing maximising high crop yields. That's all true, but deciding on what is an appropriate nitrogen fertiliser rate to apply to a crop, especially one well on the way, is no easy decision.

Weather is an important part of the puzzle. Rain is required for incorporated top-dressed nitrogen fertiliser to move into the soil, around a minimum of 5.0mm on a light soil and 10mm on a heavier soil. Research has indicated rain falling soon after application is not as vital as once thought to be so, but indefinite no follow up rain is likely to see major loss from volatilisation.

A wheat crop yielding 5.0 t/ha will remove around 100 kg/ha nitrogen, as well as 15 kg/ha phosphorus, some sulphur as well as other elements. A 2.5 t/ha canola crop will also remove around 100 kg/ha nitrogen, 8.0 kg/ha phosphorus and 10 kg/ha sulphur. With in many cases little if any legume based pastures in the rotation, run down of soil fertility, especially nitrogen, is a major issue. One common approach to avoiding fertility decline is nutrient budgeting, especially for major elements like nitrogen and phosphorus. 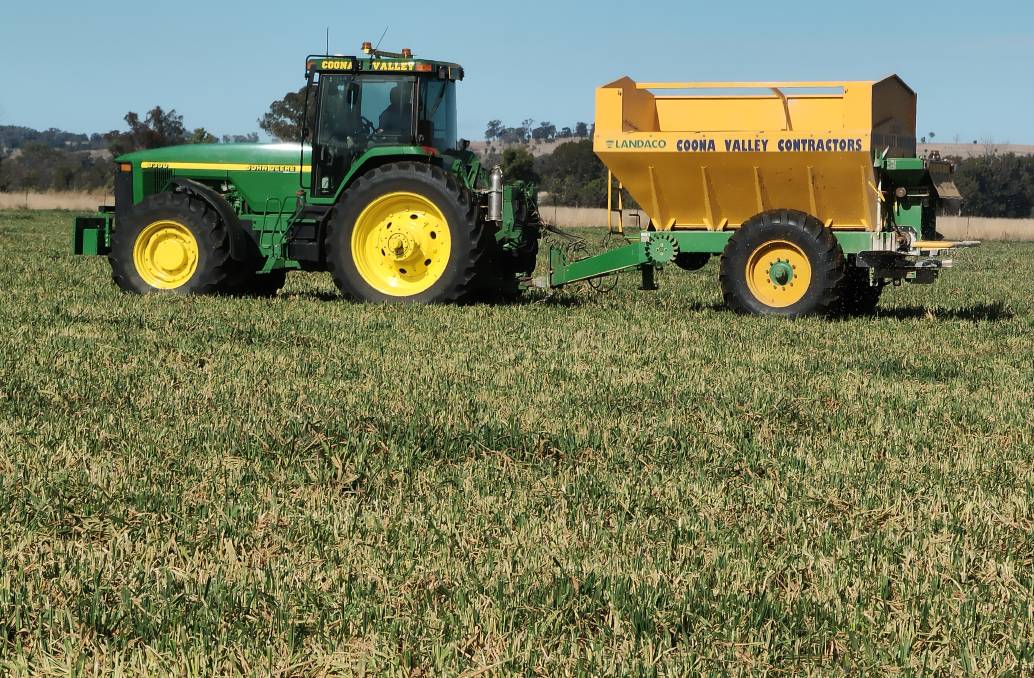 Rob Williams, Coona Valley Contractors, adding nitrogen to a dual purpose crop on 2.6.21, before a forecast rain event. Reliable rain forecasts are part of the mix.

Some research also suggests soil organic carbon decline in cropping only rotations, even with zero till and stubble retention, is more a product of soil fertility decline, especially nitrogen. Ensuring soil nitrogen and elements like phosphorus are at least stable, and improved where unduly declined, is an important part of maintaining and building soil carbon.

Other aspects of balancing soil nitrogen include leeching and denitrification. Some researchers feel, especially in higher rainfall environments, earlier crop sowing allows them to grow deeper roots as well as more extensive roots to capture nitrogen before it leeches out of the normal crops soil profile. For example March sowing of dual purpose crops is likely to prevent nitrogen leeching better than more traditionally late April May June sown crops. 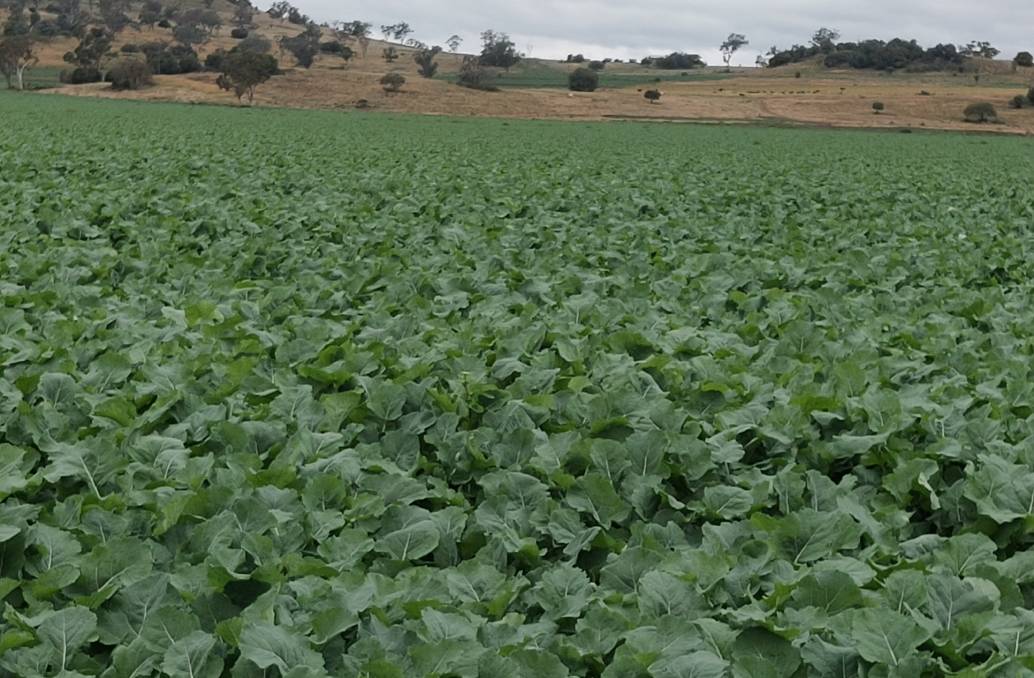 Research indicates nitrogen fertiliser applied to canola rarely has a detrimental affect should the season turn dry. Excess nitrogen is available to the next season's crop.

Adding extra nitrogen is complex. Soil testing and previous grain protein levels can be good indicators of crop nitrogen needs. Maximum benefit from fertiliser nitrogen needs to be balanced with soil water levels, and likely rainfall from here on for the crop growing season. Research supports that excess soil nitrogen, for example via high fertiliser rates, is not harmful to canola, can occasionally adversely affect cereal crops but commonly is still valuable for the next year's crop. Good nitrogen responses are also dependent on already good levels of other vital elements such as phosphorus.

Good responses to additionally applied fertiliser nitrogen also require elimination where possible of other likely yield limiting factors. An aspect receiving growing attention in cropping only systems is a legume pasture phase used for hay or silage or just to build soil nitrogen. Such crops commonly involve a number of pasture legumes suited to a given soil and environment. They not only build soil nitrogen, but also be valuable for soil carbon improvement, help as part of disease and nematode control, and provide other herbicide options where weed herbicide resistance has evolved.

Next week: Attack crop and pasture weed, pest and disease problems from a combined strategy approach.