It's digging time for Richard and Jane at Hartley Truffles. A chilly winter wind blows through the trunks of the oak trees, scattering the last of the leaves, as Richard and Jane Austen begin their walk.

Ahead of them, two Border Collie dogs are already hard at work, sniffing at the cold, damp ground under the trees. As they start to dig excitedly, Richard and Jane crouch down, and smell the earth. When the strong, sweet scent reaches them, they take out their digging tools and gently dig the small black mound out of the soil, and carefully stow it in a bag.

And they walk on, searching for the wonderful little black bundles that make chefs swoon. And even though they're cold, and have hours of stooping and sniffing and digging ahead, they wouldn't be anywhere else.

This is what winter looks like for the Austens, but the owners of Hartley Truffles, at the foot of the Blue Mountains, say it is a labour of love. I FOUND IT: Richard and Jane Austen digging for truffles at Hartley Truffles.

Richard and Jane started their truffle journey after a trip to southern France in 2002, when they came across a market stall selling summer truffles. After speaking to the grower, who then invited them to his farm, and corresponding with him for two years, they took the plunge.

Richard said the idea of growing truffles on the family's 2800-hectare cattle property came at the right time. "We were both at the end of big projects, and needed something to do," he said.

After soil testing much of their farm, they found the ideal place was near the house. They prepared the soil, by adding lime and dolomite, then began planting two varieties of oak trees inoculated with black truffle (Tuber melanosporum) in 2007 and 2008. The truffles grow with the roots of the tree. For most, it's a waiting game of up to seven years to first find a truffle. But for the Austens, it only took four. On June 22, 2011, their first truffle was found. "It was like becoming a parent all over again," Richard said.

Early on, a contractor or fellow truffle farmer would come with dogs for harvest. But now, they have their own special helpers. Their beloved dogs, Maggie, a nine-year-old Border Collie cross, and Coco, a purebred, are an integral part of their business. "We couldn't do what we do without the dogs," Jane said.

The truffles form in late spring, grow through the summer and then ripen with the onset of cold weather. Come winter, the Austens begin their harvest, at least three days a week, and sometimes from dawn until dusk. They walk the dogs along the lines of trees, and when the dogs smell a truffle, they dig to mark the spot. Richard and Jane then crouch down and smell the earth to see if the truffle is ripe. Once they find the truffle, they take a little slice from it to see the colour. "If it's dark with a pronounced creamy grain, and has a good aroma, then it is ready," Richard said.

And every truffle is different. "Some smell nutty or like chocolate, some like garlic, mushrooms, seaweed or earth," Jane said. 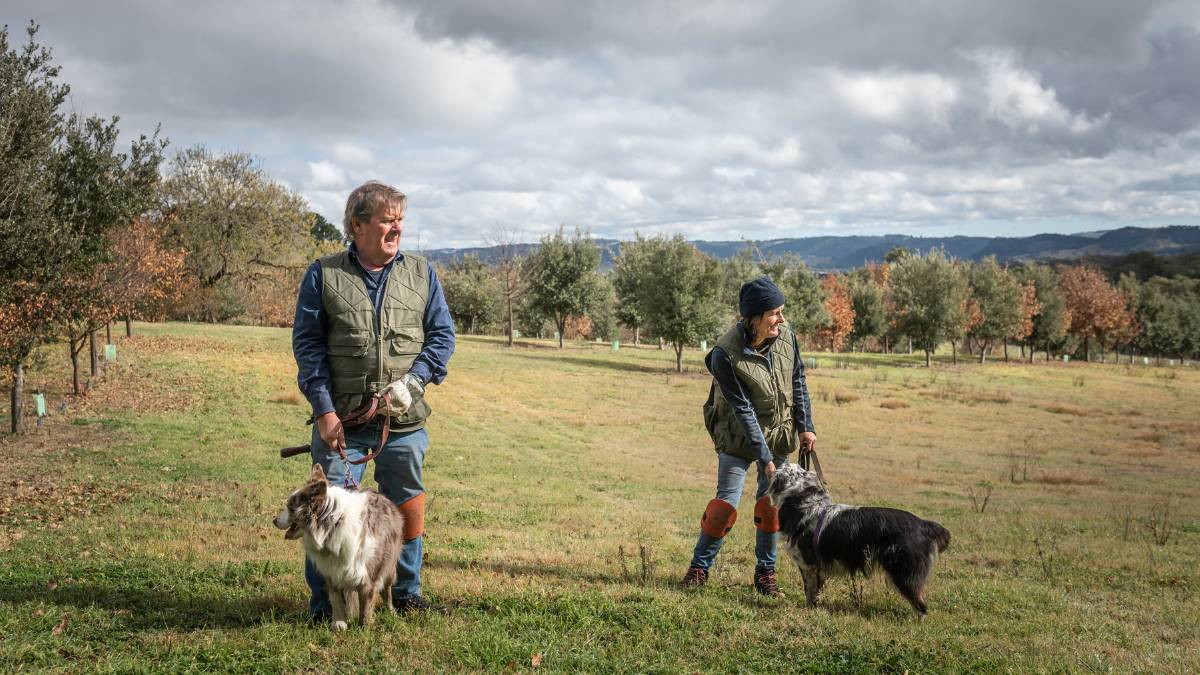 ON THE HUNT: Richard and Jane Austen,Hartley Truffles, with their dogs Coco and Maggie, produce both fresh truffles, and truffled honey and salt. PHOTOS: Greg Piper.

Each truffle is carefully hand washed, cleaned and dried, then meticulously graded into three classes. Richard and Jane produce around 50 kilograms of truffles a year.

Richard said harvesting truffles sounded romantic, but often it's not. "Some of the time you've got your backside to the wind in horizontal sleet," he said.

But once the harvest is over, there's still plenty of work. Richard and Jane don't use any chemicals in the orchard, so they spend time weeding, pruning and watering trees and fencing.

And there is no end to the truffle recipe possibilities - risotto, cauliflower, pasta, mushrooms, popped in with eggs and even ice cream. Jane said truffles work best with starchy, dairy or fatty foods, and simply enhance the flavour of the foods.

Richard said the Australian truffle industry was only in its adolescence, but the Austens are passionate about ensuring only an extremely high quality truffle reaches their customers' tables. "It goes straight from the grower to the user, from us to the restaurant," Jane said.

Richard said freshness, provenance and grading was crucial, and that's why co-op EAT (Eastern Australian Tablelands) Truffle has been created, with the help of government funding under the Farming Together program. Now in its fourth operating season, the co-op has 25 members supplying truffles from many high country regions in eastern Australia.

"Together we are able to deliver fresh truffles of consistent high quality into Sydney or Canberra within 24 hours of being out of the ground," he said. "We can say to customers 'this was in the ground one day ago'."

The co-op has exported small quantities of truffle to Singapore and Japan, and in the longer term expects to become more export focused.

Hartley Truffles sells fresh truffles, as well as truffled salt and truffled honey, at Carriageworks and Blackheath markets during truffle season. Through the co-op, it supplies a number of restaurants with fresh truffles. Its honey and salt are also available year round at a number of delicatessens and shops, and through its website. 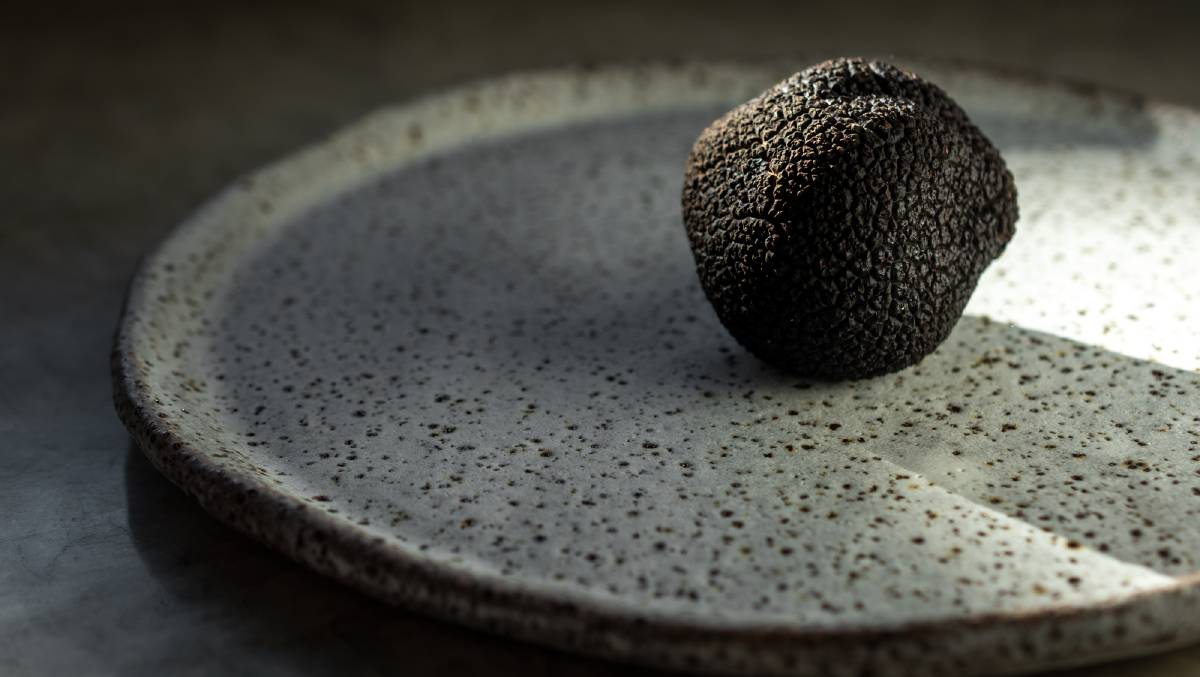 MAGIC: Hartley Truffles sells around 50 kilograms of truffles a year, direct to restaurants through the EAT Truffle co-op, or at Blackheath and Carriageworks markets in the truffle season.

"We really enjoy it. It is a passion," Richard said. "We are still learning something new every season."