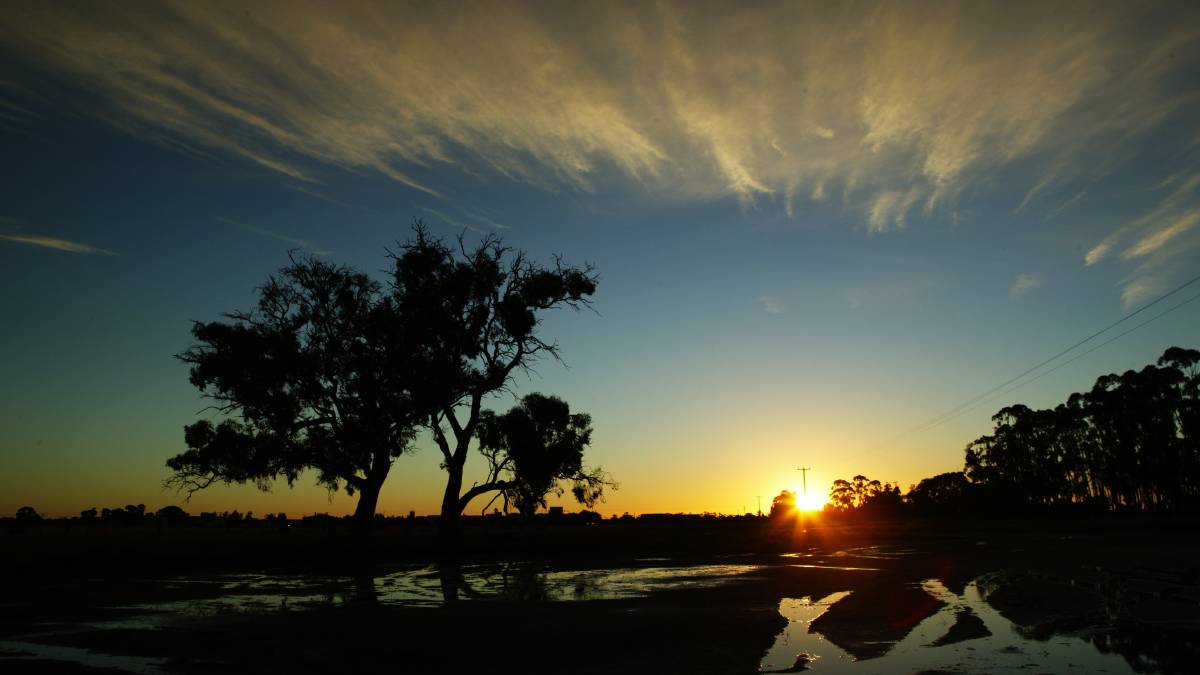 A new dawn for NSW after the pandemic with the NSW Budget predicted to be back in surplus by 2024-25, with a huge lift in consumer and business sentiment this year.

NSW is on track to override the economic storm of the pandemic, with consumer and business confidence rising significantly and the NSW Budget on course for a surplus by 2024-25.

Most of the Budget's main items were announced prior, but one new program announced on Tuesday was a $100 learn to swim voucher for 3-6 year olds.

NSW Treasurer Dominic Perrottet said the Coalition's careful management of state finances over the last 10 years had given the NSW Government the flexibility to meet the economic storm of the pandemic.

Keeping the state working and infrastructure projects going with an "open state" policy, was important during the pandemic and there had been a $23 billion improvement in the budget bottom line since November, due partly to a surge in stamp duty receipts.

The Government was still focussed on axing stamp duty replacing it with a new property tax and published a new publication advocating the tax. It admitted there had been a fightback by farming groups concerned a new property tax will disadvantage rural landholders and those passing on farms between generations.

"The proposed property tax rate for farmland has been calculated to provide the same present value of revenue, as is currently paid by owners of farms, but the impact during the initial years of the reform would be a tax cut for the sector," the publication says.

NSW Farmers have told the Government a property tax would hurt farmers because of their inconsistent cash flow and variability of unimproved land value.

But a property tax would "stimulate home ownership, grow the economy and create jobs", Mr Perrottet said. The government would continue to finesse the property tax proposal.

The theme of the 2021-22 NSW Budget was "cementing the recovery", he said. NSW was the only state to have a Triple A credit rating from Moodys, and NSW was now the "confidence capital of Australia". 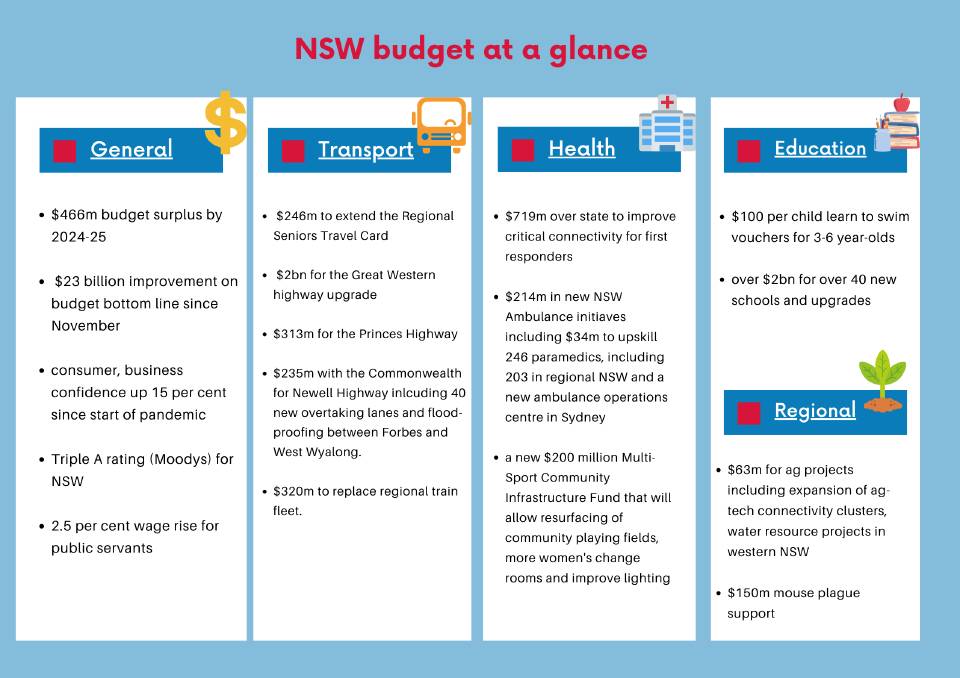 "Our response strategy has worked," he said. By 2024-25, the NSW Budget will be back in surplus to the tune of $466 millon, budget papers predicted.

Unemployment was on the way down and would soon fall from 5 per cent to 4.5 per cent by next year, he said. The state had recovered all of the 270,000 jobs lost during the pandemic, and had added about 36,000 more on top of that. Consumer demand was also up by 15 per cent on last year.

Some of the new programs announced on Tuesday included:

* $214m in new NSW Ambulance initiatives including $34m to upskill 246 paramedics, including 203 in regional NSW and a new ambulance operations centre in Sydney.

A strong hold on the Budget had allowed the government to offer a 2.5 per cent wage rise to public servants, that will flow from next month.

In regional funding, most of it already announced, the government is supporting activation precincts, some of them near the inland rail, with $185m for Parkes, $157m for Wagga Wagga, and seeding money and ongoing support for precincts in the Snowy Mountains and at Narrabri and Moree.

The government will be investing another $50m to boost regional mobile coverage.

The government has set aside $150m for the mouse plague response program.

There will be more regional schools as part of the government's "biggest investment by any government" in education with around 40 new schools in a $2.4bn new schools program.

Major regional road projects include the already announced $2bn for the Great Western Highway upgrade, $313m for the Princes Highway, $235m with the Commonwealth for the Newell Highway for 40 new overtaking lanes and flood-proofing between Forbes and West Wyalong and $70m for the New England Highway and $24 million for continued sealing of the Silver City and Cobb Highways.

As promised, the government will spend $320 million to upgrade the regional rail fleet to replace the existing XPT, XPLORER and Endeavour trains and construct a new purpose-built maintenance facility at Dubbo.

In the Agriculture area, the government reannounced its $64 million package that includes expanded funding for ag-tech projects under the Future Ready Regions strategy. It also includes funding for water source and mining exploration in the Western Division using an electromagnetic detector that has already covered 19,000 square kilometres..

Minister for Agriculture Adam Marshall said that after drought, bushfires, floods and mice, the agricultural industry could now firmly focus on producing the best food and fibre in the world, backed by significant investments from the NSW Government.

"In our 2021-22 Budget there is more than $1 billion in recurrent and new spending to allow farmers to focus on farming while we support them through innovation, improved biosecurity and building resilience," Mr Marshall said.

"We've put $150 million on the table for regional communities to tackle the mice plague, $72.5 million to help primary industries recover from floods and more than $38.2 million in drought preparedness.

"Of that $1 billion, $374.5 million has been put towards building productive and sustainable agriculture and aquaculture, including enhancing the productivity of plant and livestock farming systems, with a focus on adapting to our evolving and unique climate.

"A further $262 million is invested in biosecurity, including pest and weed management, to ensure we continue to knock down threats to our primary industries. "

"We're also investing to restart the Emergency Water Infrastructure Rebate Scheme, which will headline our future preparedness program, along with many more initiatives and investments. "